Soybeans have a long history as a nutritious hay and silage crop. Prior to World War II, the principal use of soybeans was as forage.

By the early 1940s, soybeans were harvested at various stages of growth, cured and fed as high-protein hay, which was considered to be similar in nutritional value to alfalfa. When oilseed values climbed in the 1960s and 1970s, soybean production shifted almost exclusively to seed types and away from forage types.

Soybean plants may be grazed or harvested from the flowering stage to near maturity for use as high-quality hay.

Soybeans may also be grown as a silage crop in pure culture or intercropped with corn or sorghum. Using soybeans for forage, rather than grain, is also economically feasible given the current relative values.

Nutritional quality
During the 1920s and 1930s, forage soybean production – and the subsequent nutritional value of hay and silage – were investigated extensively.

These earlier trials concluded that soybeans should be drilled at high populations (1.5 to 2.0 bushels per acre of average-size seed) to obtain small stem diameters.

A high plant population would promote thinner-stemmed soybeans, which would be easier to condition to ensure proper curing.

The stem is the least desirable plant component, since it is considered to be coarse and fibrous. Soybeans may be harvested for hay at any stage of growth.

Depending on rainfall patterns, conditioning the stems may be necessary to cure hay in a timely manner.

Unlike most legume crops used for hay, both foliage and pods provide digestible protein. The soybean plant, when harvested just prior to leaf yellowing at maturity, has pods that are high in protein and oil.

The quality of forage soybeans varies depending on the variety, stage of growth, age and harvesting losses.

Contrary to other forage legumes, the protein percent and the quantity of protein and digestible energy material per acre increase after flowering until near maturity (see Table 1).

From the standpoint of producing the highest quantity and quality of forage, the best time to cut is at 90 percent pod fill, just before the leaves begin to yellow and fall.

One of the main advantages of soybean forage is the flexibility of harvest dates, since its quality is good over a long period. Tonnage, however, is sacrificed when harvested early.

The soybean plant maintains its high quality over such an extended period because of the high protein and energy contents of the developing seed.

The mature seed has about 40 percent protein and 20 percent oil. When the seeds reach about 90 percent pod fill prior to leaf drop, about one-third of the plant weight is in the seed.

As the seeds develop, they more than compensate for the loss in quality in the stem and other plant parts.

In production of soybean hay there is a trade-off between tonnage and the speed at which the hay dries. When the pod is at full size and the seed is still small, a hay conditioner may be used to crush the stems and reduce the drying time.

Minimal handling of the forage will reduce loss due to shattering. Consider tedding hay earlier in the day when moisture in the plant is sufficient to reduce leaf loss.

With good drying conditions, drying time for conditioned hay is about two to three days.

When the seeds are larger, the conditioner may crush or pop the seed out of the pod. At this point, conditioning soybeans is not practical, and drying time is greatly increased due to the size of the seed.

Soybeans with full-sized seeds that have not been conditioned may take four to six days to cure properly.

Some soybean hay components may not be readily eaten by the animal. Losses due to refusal may range from 0 to 20 percent.

When the whole plant is ground, animals eat it readily, but this is not considered to be an economically viable practice.

Soybean silage
When producing silage from soybean, water retention in the seed is not a problem and the lower palatability of the stems is solved by chopping and the subsequent fermentation process.

The best stage to harvest soybeans for silage is near maturity, before any leaf loss. At this point, however, soluble carbohydrates required for proper ensiling are low.

When ensiled alone, soybean silage has an unpleasant odor and emits free ammonia and butyric acid, which are characteristics of undesirable ensiling fermentation.

For proper fermentation to occur with soybean silage, a source of soluble, readily fermentable carbohydrates, such as ground corn grain or molasses, should be added.

A minimum of 10 percent of the total silage on a dry-matter basis should be from these carbohydrate sources. 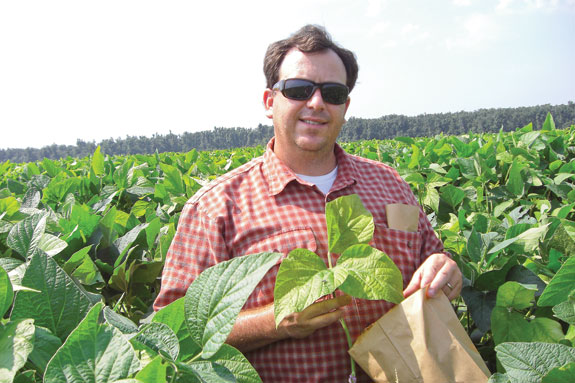 Variety selection
As with soybeans grown for grain, the highest forage yields are obtained from planting full-season soybean varieties.

Maturity group is important to consider because it indicates photoperiod response. The beginning of the reproductive period with flowering and the date of maturation are affected by the length of day much more than by the actual age of the plant.

For silage production it is not so important to match growth stage and dry weather; therefore, selection of varieties are less critical.

To reduce the stem size, high plant populations (1.5 to 2.0 bushels per acre) should be drilled or planted in narrow rows. Conventional or no-till planting should be followed.

Appropriate soybean inoculants need to be applied to the seed prior to planting in fields not previously planted to soybean. Apply inoculant using a sticker and limit exposing the inoculated seed to sunlight.

Weed control
There are fewer control measures for weeds in forage than in grain soybean production. Many herbicides have restrictions for use over the top of soybeans when grazed or used for forage.

To have limited weed problems, fields with low weed pressure should be selected and pre-emergent herbicides should be used to control weeds until the crop canopy shades the weeds.The high population and narrow rows will greatly aid in weed control.

Insect pests
There are several obstacles to managing insect pests on soybeans grown for grazing, hay or silage. Foremost among these problems is the small number of registered insecticides that permit the use of the crop for grazing or hay following application.

Of the insecticides registered for use on soybeans grown for forage or grazing, pre-harvest intervals range from three to 20 days.

This means that, for a number of insecticides, treatments could not be made just prior to harvesting for hay at the pod fill stage.

This is a period in the development of soybeans when they are highly attractive to a number of insect pests, including stink bugs and corn earworms.

Economics of soybean forage
Soybeans may be grown for use as high-protein forage with quality similar to alfalfa. When harvested at maximum dry matter per acre (when seeds are nearly full-size and leaves have not begun to fall), the weight of the dry forage is about three times the mature seed.

Therefore, a 30-bushel-per-acre grain crop would yield about 2.7 tons per acre of dry forage. In Florida, yield trials have averaged around 3 tons per acre dry matter from June and July plantings.

Summary
Soybeans may be grown for use as a high-protein forage for grazing, haying or ensiling. Adapted varieties should provide a forage with qualities similar to alfalfa.

Inexpensive seed makes this summer legume an excellent choice for livestock and wildlife. Concerns about weed and pest control measures should be minimized with careful management.  FG

References omitted due to space but are available upon request. Click here to email and editor.