Texas dairyman has faith for the future with robotics

Jordan Manning
Most people, especially those involved in the dairy industry, know the saying “Keep on keeping on” all too well. For dairy farmers across the country, it has been more than a saying but a way of life for decades, especially the last year. You put faith in your values and what you know best – your family, experience, passion – and continue despite circumstances.
Jordan Manning

The product of those values now sits in the small community of Scotland, Texas. Scotland is home to the state’s second robotic dairy, Wolf’s Legendairy, but owner Adam Wolf was focused on reinvesting in the future and technology long before it was built. From the beginning, Wolf knew the genetic potential of his cows and set out on a mission to fulfill it despite challenges along the way.

Wolf is a fourth-generation dairy farmer who grew up with a passion for agriculture but set his sights on an eight-to-five job to get away from the struggles of milking cows and started pursuing a degree in agricultural engineering at Texas A&M University. After realizing his love for the hands-on experiences of dairy science, Wolf soon tired of the idea of a desk job and decided to switch his major and get involved on the dairy judging team.

After graduating, he took a job breeding cows in west Texas where he visited large-scale dairies – often three or four per day – and deepened his passion for the industry. “During that time, my passion for milking cows reignited, and I knew I wanted to build my own dairy,” says Wolf.

One day in 2008, he got a call that changed everything: an opportunity to lease a dairy in Windthorst, Texas. Five years into that partnership, Wolf and his wife Hilary acquired full ownership and the dairy grew from 150 cows to 550. At that point, the dairy became overcrowded, motivating Wolf to find opportunities to grow and build a new facility. 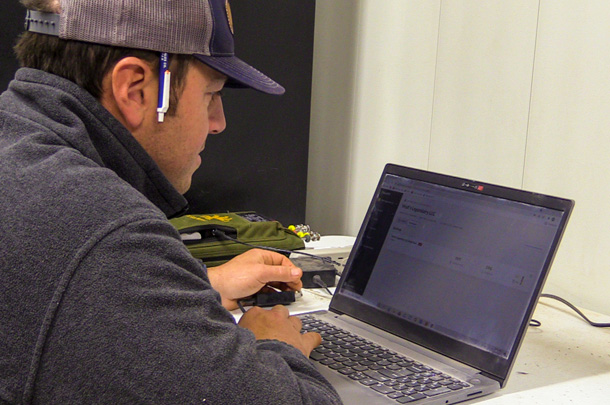 He started exploring large rotaries that were common in other parts of Texas. That vision shifted four years ago when a friend and local dairy services partner encouraged him to consider the large robotic dairies being built up north. Wolf traveled to the Midwest touring over 200 barns to start planning his own robotic facility, but he recognized adjustments needed to be made for the hot summer months in Texas.

“We were worried about our heat down south and knew we needed a facility built to optimize cow comfort,” says Wolf. He pursued a different game plan: build a tunnel-ventilated, 12-stall robotic dairy barn large enough for his herd and suited to keep them cool. He made plans to install fans and a wall of high-pressure misters programmed to turn on based on outside temperatures.

After securing layouts, permits and projections, it was time to find a lender – all while still running Wolf’s Legendairy at the old facility. The process proved challenging, with numerous lenders hesitant to provide capital for the automation components of the new dairy. At that point, Wolf wondered if he would have to keep milking cows at the 40-year-old facility for the rest of his life.

“It was a kick to the stomach, but I didn’t give up,” he says. “I was all in and didn’t want one person saying no to stop us.” The perseverance paid off. One early morning while making feed, Wolf received a phone call that created an opportunity to present his plans to a local farm credit organization that eventually approved the loan.

“They had been doing dairy loans for 20 years and said I was the most prepared they had ever seen,” says Wolf. “They stepped into the unknown to build this facility. Now it’s my job to optimize cow comfort and productivity to do the best job possible.”

The new robotic barn for Wolf’s Legendairy broke ground in fall of 2019 and started milking on Oct. 12, 2020. Like how most people can easily name a loved one’s birthday, Wolf knows that date well. His transition process to the robotic barn was a calculated one, done with the help of family and friends while employees kept the old facility running during calving season.

Wolf moved his herd in batches from the old dairy 16 miles away, dividing cows into small groups where they were pushed through the robots three times a day to build routine before going into the general population. According to Wolf, the cows became used to the robots after a few weeks. The process was successful, but it required all hands on deck with the help of family and fellow farmers.

“It was 24-hour days at the beginning, and the other dairymen were very supportive,” he says. “The community, friends, even some of my high school classmates really stepped up.” 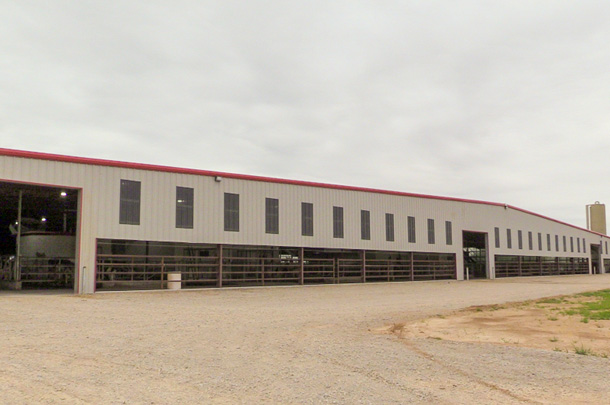 Now his herd is settled in, with the help of key technology optimizing sustainability and cow comfort. Wolf’s Legendairy uses “green bedding” on top of water beds to give cows more cushioning and save costs for hauling in sand. After flushing lanes six times a day, the water and manure go through a separator. The water is re-used to flush lanes, and the dry material gets composted for bedding. “I know the cows like it because immediately after we add it about 90 percent of them are laying down,” says Wolf.

Maximizing genetic potential has also been a priority in breeding for ideal teat size and placement to align with the robot’s sensors. And, to overcome limited water sources in the area, Wolf built a 17-million-gallon reservoir for pumping into storage tanks at the new dairy.

From growing up milking cows with his dad in a flat barn, to using robotic technology and data that comes with it, stands out to Wolf as a unique experience. “I tell people that you have to trust technology and not go back to your old management ways,” he says. “I’ll walk through the new facility, see a cow in heat and just walk on by with full confidence the robots will detect it.”

While Wolf is not finished looking to the future for Wolf’s Legendairy, he’ll tell you the most rewarding part of this experience has been having flexibility and creating a legacy that he and Hilary can continue passing on to their three kids.

“I want to provide a dairy sustainable enough for my kids to come back, where they can work side by side with me every day,” he says. “Something they’re proud of. Something I’m proud of, too.”

This article is brought to you by Dairy Max. Click here to learn more about the Wolfs and other local dairy farm families.

PHOTO 1: Wolf's Legendairy was one of the first robotic milking facilities in Texas.

PHOTO 2: Wolf secured layouts, permits and projections for an automated dairy, then presented his plan to lenders.

PHOTO 3: To start up the new 12-stall robot dairy in October 2020, Wolf moved his herd 16 miles from their former location to the new facility near Scotland, Texas. Photos courtesy of Dairy Max.