Three years ago, the De Jongs entered into this venture to satisfy their quest to become more carbon neutral and sustainable in their organic operation. “I’m in the dairy industry, so we're always looking for what I would say the ‘holy grail’ of how to solve and actually turn what we know is an asset into a better asset,” Donald says.

The Varcor system they installed at their farms in Texas and Indiana works differently than a traditional dairy manure management system, in that the mechanical vapor recompression and distillation process functions comparably to a milk powder plant, Donald says.

In this process, sand and manure are separated from the slurry, like many standard manure separators. The remaining components of the slurry are put into the new system, which brings the temperature near boiling point. The product is then sprayed onto a disk, which dries the manure, and once scraped and collected, results in a highly concentrated nitrogen-phosphorus-potassium (NPK) powder fertilizer, he explains.

“The manure is actually vacuumed on a daily basis and then run through this process, so that manure is handled much easier and on a much more timely basis than what most people are doing,” Cheri says.

The remaining water and ammonia are turned into vapor and recompressed to transform into liquids. The system then develops two final products, Donald says. “You'll end up with clean H2O water coming out one side, and the other side would be an aqua ammonia, which is a mixture of about twenty percent ammonia and water.” 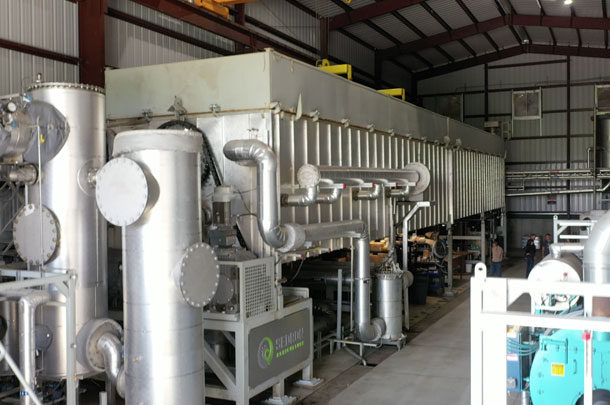 The creation of this system was a true collaboration of the right people in the right place and time, Donald says. The idea initially sparked when Donald joined forces with Peter Janicki of Sedron Technologies, formerly known as Janicki Industries.

While Janicki’s main area of expertise lies in aerospace engineering and toolmaking, he and his team previously partnered with the Bill and Melinda Gates Foundation to produce the Janicki Omni Processor, which processes human waste into clean, drinkable water in developing nations.

Janicki, whose wife’s family dairies in Washington, saw potential for a similar system on a dairy. “I sat in a room with 70 engineers, and we said, ‘Hey, we can solve this problem,’” Donald recalls. ‘“We can do this, and we can do it economically and add value.’”

One of the ultimate aims of this system is to eliminate the need for a lagoon and remove the methane production that comes with it, Donald says. Currently, the De Jongs are still utilizing their lagoon for storage of the water being produced, which they are using for irrigation. However, once they are able to prove a consistent clean water supply that satisfies regulatory agency standards, their goal is to store the water in a potable tank for the dairy.

Furthermore, the NPK powder produced is more convenient to use. While applying manure to farmland can be time sensitive for the farmer, NPK powder can be applied at any time or location and can be placed directly within the root structure instead of on top of fields, Donald says.

The powder is also storable, which ensures a steady supply during the growing season and can be worked in whenever and however plants need it. “We’ll be able to apply it in the time and place of our choosing, not because we’re forced to get rid of it,” Donald says.

The direct application method allows for added benefits for farmers striving to be carbon neutral because there will no longer be a need to disk and plow, which opens the land to release carbon. “We’re hoping with this fertilizer product, dairies can be on an equal footing with other no-till operations,” he says.

For dairies in water-conscience states, the closed-loop system helps stretch the water supply because no additional water is needed to carry out operations, he adds.

Expenses are not cost-neutral for every farm size, though they are working on establishing various partnerships and possible hybrids to spread out costs more evenly. The De Jongs say this technology has the potential to be both an efficient and economic addition for dairies.

Before installing this system, their dairy was losing 80% to 90% of their nitrogen due to volatilization, Donald says. Now, being able to capture their nitrogen has provided a huge financial lift, especially as an organic operation.

Another plus: Weed seeds are sterilized during the process. “From an organic standpoint, having a weed-free fertilizer with that amount of nitrogen capture is very big,” Donald says.

Overhead costs are also minimized, as tractors, dump trucks and fuel used for handling manure are no longer needed. Additional revenue is possible, as the fertilizer product is in a form that can be sold to neighbors or other farmers in the area, Cheri says.

With all the positives Natural Prairie Dairy Farms has experienced as a result of this system, Donald and Cheri are hopeful others can see promising results too, so long as they can modify their management style to focus on the system daily. “It’s going to be another system, just like your dairy barn, that you have to manage every day,” Donald says. 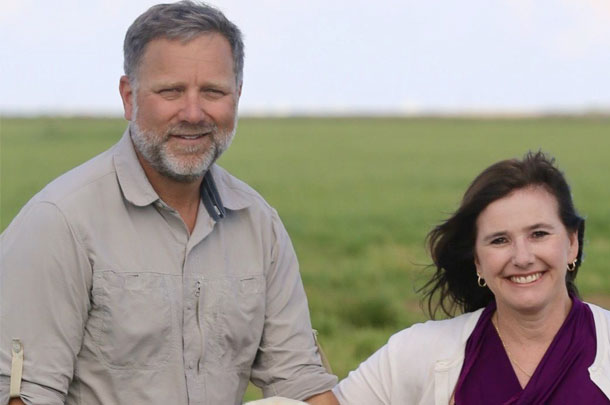 The De Jongs see the potential this technology has to be available for multiple uses in addition to the dairy industry, including swine and poultry operations, wastewater treatment plants and various food-processing plants. “Our dream is to be able to commercialize it and be able to distribute not just in the dairy industry,” Donald says.

While they are eager to get this system on the market, Donald and Cheri emphasize the need for making sure the system provides quality results first. They’re hoping to begin trials with Texas A&M University, Purdue University and other extension centers to test performance over a variety of facilities, they say.

“We know [trials] will be very critical for when people are looking, not only at the technology, but at what the outputs are,” Cheri says.

As more consumers become cognizant of where their food comes from, Donald and Cheri are confident this will be a showstopping system to help farmers, both economically and environmentally. “It’s going to be a game changer on how we handle the backsides of our operations,” Donald says. “I know if it’s helping us, it’s going to help a lot of guys and gals.”

PHOTO 1: The new manure processing system transforms manure into clean water, which can be used for other uses on the farm.

PHOTO 2: Natural Prairie Dairy Farms has installed the Varcor system to process manure at their Texas and Indiana locations. The machine works similarly to a milk powder plant, which results in two final products: clean water and an organic powdered fertilizer.