Dave Natzke
After limiting year-over-year milk production growth to about 0.5% in the second quarter of the year, July 2020 output bounced up about 1.5% compared to a year earlier, according to the USDA’s monthly
Dave Natzke

Email Dave Natzke
Milk Production report, released Aug. 19. The increase was fueled by higher milk prices that were incentive enough for producers to reverse a three-month trend to cut cow numbers but limited by very modest growth in milk production per cow. Also on Aug. 19, the USDA’s Ag Marketing Service announced the September 2020 Federal Milk Marketing Order (FMMO) Class I base price of $18.44 per hundredweight (cwt). After peaking last month, the September price is down $1.34 from August 2020 but 59 cents more than September 2019. Through the first nine months of 2020, the Class I base price average is $16.65 per cwt, just 14 cents more than the same period a year ago.

Reviewing the USDA preliminary estimates for July 2020 compared to July 2019:

Compared to a year earlier, July cow numbers were reported higher in nine states and lower in nine states, with six others unchanged. Cow numbers were up a combined 62,000 in Texas, Idaho, South Dakota and Colorado, but down 29,000 head, collectively, in Wisconsin, Minnesota, Florida, Vermont and California. 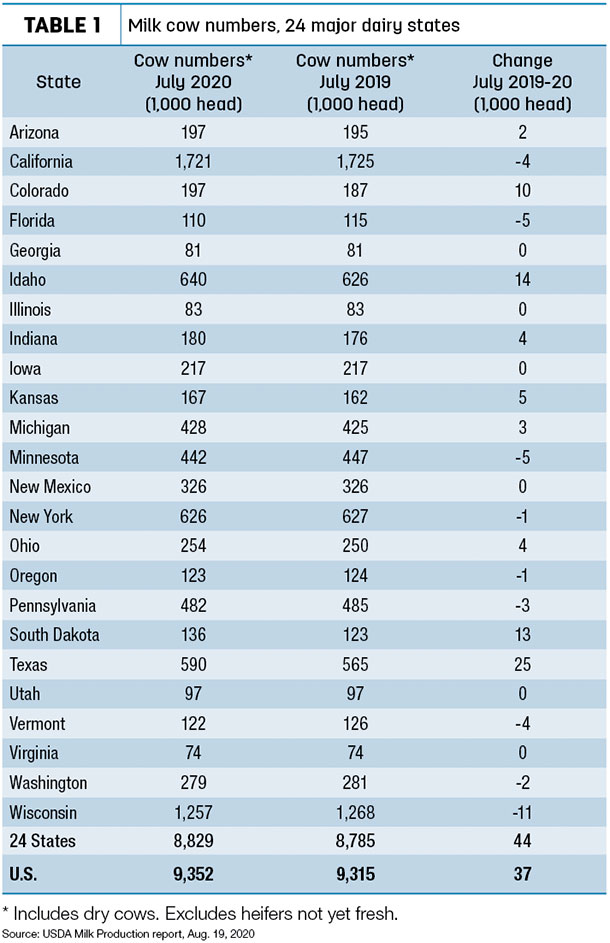 Compared with last year, the growth in U.S. and major dairy state average milk output per cow remained subdued in July, up about two-thirds of a pound per day from the same month a year earlier (Table 2). In the 24 major dairy states, production was lower in eight states, led by a 115-pound decline in New Mexico. Year-over-year monthly output per cow was up in 13 states, paced by Pennsylvania and Indiana, up 80 and 70 pounds, respectively.

Michigan remained the nation’s leader, averaging 2,300 pounds of milk per cow in July 2020. 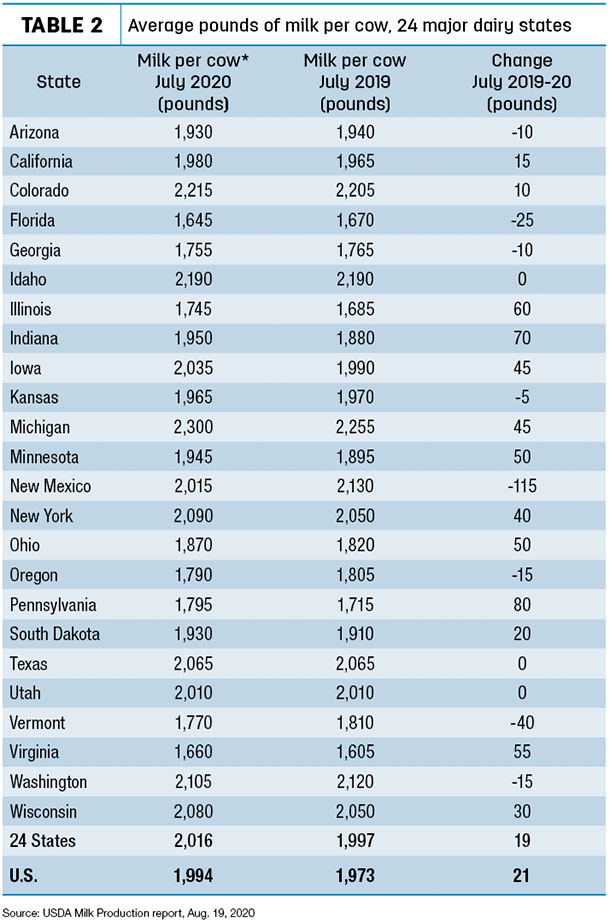 In contrast, July 2020 milk production was lower than a year earlier in six states, with Georgia, Oregon, Washington, Florida, Vermont and New Mexico down a combined 74 million pounds.

On a percentage basis, South Dakota production grew 11.5% compared to July 2019, with Indiana and Colorado each up about 6%. Florida, Vermont and New Mexico were each down more than 5%.

The dairy situation and outlook continues to be dominated by coronavirus pandemic-related events and will continue to be so for many months to come, according to Peter Vitaliano, chief economist for the National Milk Producers Federation (NMPF).

Price volatility should be expected as long as COVID-19 makes its way through the economy, Vitaliano, said in a recent NMPF Dairy Defined podcast. Vitaliano, who writes NMPF’s monthly Dairy Market Report, said the extent of coronavirus-related closures this fall and how much farmers increase milk production following the strong recovery in milk prices this summer will remain significant questions for the rest of the year.

The July all-milk price will be one of the highest recorded since 2014 and will potentially rival those booked in the final months of 2019. Thereafter, however, the monthly all-milk price is expected to recede to about $18 per cwt by the end of the year, Vitaliano said. The lower price expectations reflect the currently swelling second wave of the coronavirus and the resulting setback to food service demand for dairy products, plus the cloud it raises over school use of milk and dairy products this fall.

As a reminder, another view of the dairy situation and outlook will be shared on Aug. 25. Rabobank’s Global Dairy Strategist Mary Ledman and Vice President of Dairy Research Ben Laine will discuss global and U.S. dairy markets in a I-29 Moo University Consortium webinar at 12 p.m. (Central time). There is no registration and participants can access the webinar here.

Tranel provides insight into the milk and feed markets and flexible marketing strategies to fit a producer's needs. He noted that the USDA typically purchases two-tenths of 1% of annual U.S. milk production for food assistance programs; this year it’s closer to 2.5%. Uncertainty – related to future trends for restaurant and food service and retail dairy sales – remains a driving force in milk markets. Listen to the archived podcast here.