Fat-feeding is a useful strategy to limit excessive feeding of highly fermentable carbohydrates (i.e., high-starch feeds), thus reducing the risk of sub-acute acidosis and milk fat depression (MFD). Although fat feeding can be advantageous for the above-mentioned reasons, its use in lactation diets is constrained by adverse effects on dry matter intake at high feeding levels (≥7 percent of ration dry matter), limits associated with feeding rumen-degradable unsaturated fat (i.e., oils that contribute to MFD), and cost of commercial fats.

Producers and nutritionists need to carefully consider the type, composition, and feeding level of fat to leverage the advantages of this source of dietary energy, while maximizing their cost-effectiveness in changing market conditions.

While typical diets for cows may contain two to four percent crude fat, high-energy diets for early lactation cows may contain four to seven percent crude fat on a dry matter basis. However, the use of “crude” fat is of limited interest from a nutritional perspective. Similar to protein nutrition, where the interest is centered on amino acid supply, fat nutrition ought to be focused on fatty acid (FA) supply. We now know that different FA can uniquely modulate cow metabolism; energy partitioning towards growth or lactation, fertility, and health. In this context, the so-called FA composition of fat supplements and the total mixed ration is an important consideration when making dietary decisions for fresh cow diets.

We can’t forget that forages and cereal grains provide some FA to the cow. These natural fats may contribute to two to three percent of ration dry matter. The addition of natural-added fats should then be considered. These include oilseeds such as canola, cottonseed, or flaxseed; however, these sources can be very high in unsaturated FA (e.g., oleic [C18:1], linoleic [C18:2; an omega-6 FA], and linolenic acids [C18:3; an omega-3 FA], respectively) that may potentially compromise fiber digestibility. Whole cottonseed is an unsaturated FA source but also provides protein and neutral detergent fiber. Whole soybeans are high in unsaturated fat and protein. 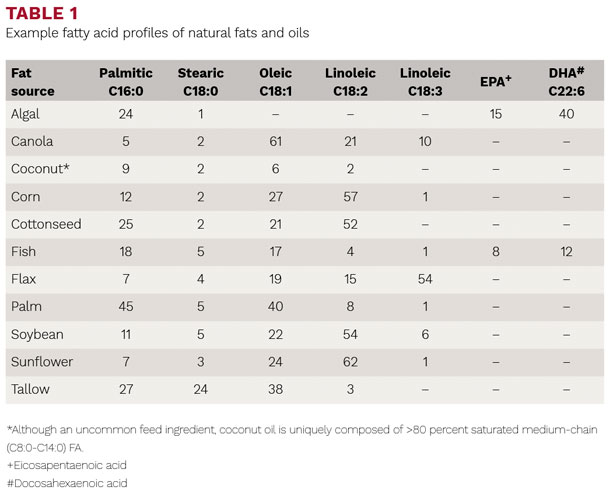 If storage and handling can be managed, rendered animal fats are an alternative feed source rich in saturated FA. Regardless, farmers may be limited to feeding one to two percent natural-added fats to limit the rumen unsaturated FA load (RUFAL; the sum of C18:1, C18:2, and C18:3) and shifts in rumen bacteria populations to maintain balanced rumen fermentation and fiber digestion. To overcome this limitation, commercial fats are a go-to source. Because they are often highly saturated, including palmitic and stearic acids (C16:0 and C18:0, respectively), they are generally accepted as “rumen inert”. These FA are commonly palm distillates, which can positively impact milk fat secretion and fiber digestion. 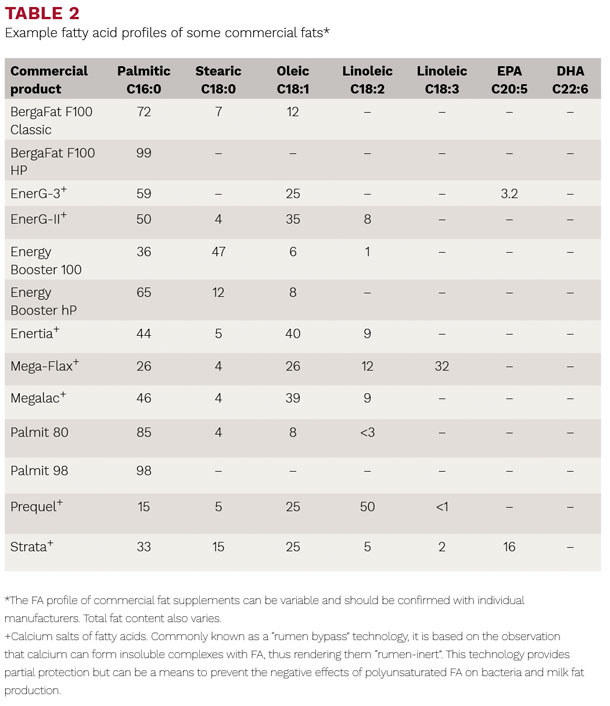 They may contain some oleic acid; however, the post-ruminal supply of rumen biohydrogenation intermediates is less of a concern for MFD. Calcium salts of FA (e.g., palm or fish oil) are supplements that may increase the post-ruminal delivery of unsaturated FA. This can include omega-3 FA like linolenic acid and docosahexaenoic acid (C22:6; an omega-3 FA) for fresh cows.

Once absorbed, FA serve different purposes, which are influenced by the chemical composition of the FA. For example, palmitic acid can be preferentially incorporated into milk fat, consistent with research showing increased milk fat content and yield, as well as increased fat-corrected milk. Palmitic acid feeding also enhances energy partitioning towards milk production, and away from body fat reserves. In fresh cows, palmitic acid feeding has accelerated body condition loss.

At Cornell, we hypothesize that palmitic acid decreases insulin sensitivity in adipose tissue to enhance lipolysis and partition glucose towards the mammary gland for lactose synthesis. In contrast, increased availability of monounsaturated oleic acid seems to increase the incorporation of FA into body fat reserves and less energy is diverted towards milk synthesis. These findings from Michigan State University were supported by recent work that oleic acid acts as an insulin sensitizer in postpartum bovine fat tissue. The current thought is to feed commercial fats with some oleic acid in fresh cows. Such an approach favors increased FA digestibility and maintenance of body condition; however, this may be at the cost of milk production. Cows fed high palmitic acid that maintain high milk production, health, and fertility may not require a substitution with oleic acid.

Omega-3 FA like C18:3 and C22:6 are anti-inflammatory compounds that likely enhance insulin sensitivity. Although data is limited in dairy cows, these FA (that escape rumen biohydrogenation) likely have strong potential to minimize body fat loss, enhance hepatic health, prevent inflammation, and reduce the incidence of postpartum disease. However, we should be careful, because cows with a high genetic merit for milk production innately mobilize body fat to support lactation.

Dietary approaches that enhance endogenous omega-3 FA supply should be considered as an approach to enhance herd health in situations where disease and infertility are current challenges to achieve high milk production. The McFadden lab is studying dietary approaches to enhance the post-ruminal delivery of omega-3 FA using various forms of protection. In addition, our research group is considering the possibility that omega-3 FA feeding enhances the efficacy of rumen-protected methyl donors (e.g., methionine or choline) to maximize hepatic methylation, phosphatidylcholine synthesis, and the removal of triglyceride in fresh cows. We are considering this possibility because the transition cow often experiences a decrease in the proportion of polyunsaturated FA, relative to total FA supply.

In conclusion, dietary fats provide FA of varying composition to the fresh cow. These FA can vary in dietary amount, susceptibility to biohydrogenation, digestibility, metabolic utilization, and bioactive properties (i.e., not all FA are created equal). Future research is likely to identify feeding recommendations for specific FA or ratios of FA in fresh cow diets that optimize health and milk production.