Milk solids: A better indicator of supply and demand 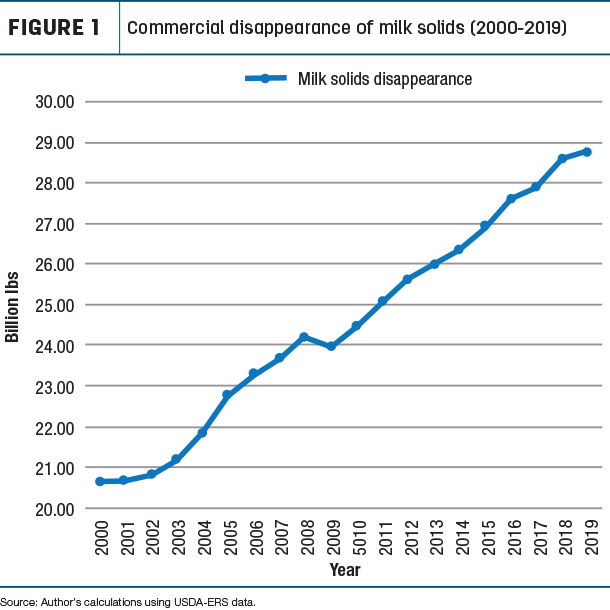 As I’ve written about previously in Progressive Dairy (May 7, 2018), using milk solids (milkfat plus nonfat solids) instead of pounds of dairy products sold or pounds of milk produced provides a more accurate measurement of supply and demand.

Disappearance of milk solids through exports was 7% lower in 2019 compared to 2018. This is the reason for the smaller increase in total demand (domestic and export) last year. Even though exports were lower, 2019 was the second-highest year for exports, only trailing 2018. Back in 2000, exports only accounted for 3.9% of milk solids disappearance. Last year, it was 14.2% (see Table 1).

Separating domestic demand into milkfat and nonfat solids, we find milkfat is driving demand. Since 2000, milkfat disappearance increased 36%, while nonfat solids domestic disappearance increased 19%. Increased consumption of cheese and butter help explain the higher increase for milkfat. Cheese averages about 28% and butter 80.5% milkfat. From 2000 to 2018 (most recent year available for individual products), cheese and butter’s total use of milkfat increased 54%.

Opposite of domestic demand, over 90% of milk solids exported are nonfat solids. This is expected with nonfat and skim milk powder, along with various whey products, being the major dairy products exported. In 2019, 65% of nonfat dry milk powder, 35% of dry whey, 50% of whey protein concentrate, and 68% of lactose production were exported.

As shown in Table 2, cheese is the major user of milk solids. 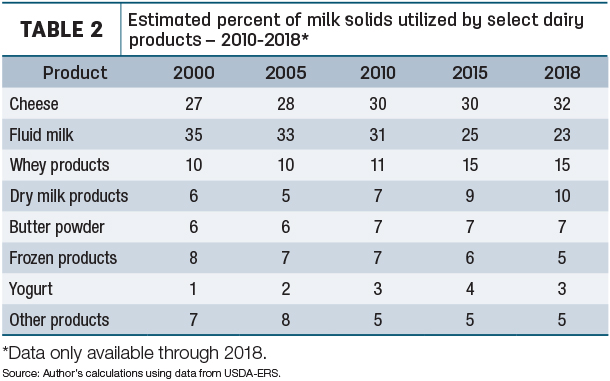 Cheese increased its share of milk solids utilized from 27% in 2000 to 32% in 2018. In that whey is a byproduct of cheese, both products combined utilized 47% of milk solids in 2018. At the current rate of growth, the cheese industry could soon be utilizing at least one-half of all milk solids production.

Looking at other products, yogurt showed growth from 2000 to 2010 but, since 2018, milk solids utilized through yogurt have declined slightly. Likewise, frozen products were steady from 2000 to 2010 but have been on a decline since. Dry milk products, which include nonfat and skim powder, have grown, especially since 2010, and utilized 10% of the nation’s milk solids in 2018. Increased exports are driving more milk solids used in dry milk products.

Now turning to the supply side of the equation, milk solids production in 2019 compared to 2018 was only 0.63% higher, just slightly more than the increase in demand. This is the lowest annual production increase since 2013 and less than one-half the increase from 2017 to 2018. The close supply-to-demand ratio was a primary reason for higher milk prices in 2019. Production of milk solids increased from 20.8 billion pounds in 2000 to 28.1 billion pounds in 2019 (see Figure 2). 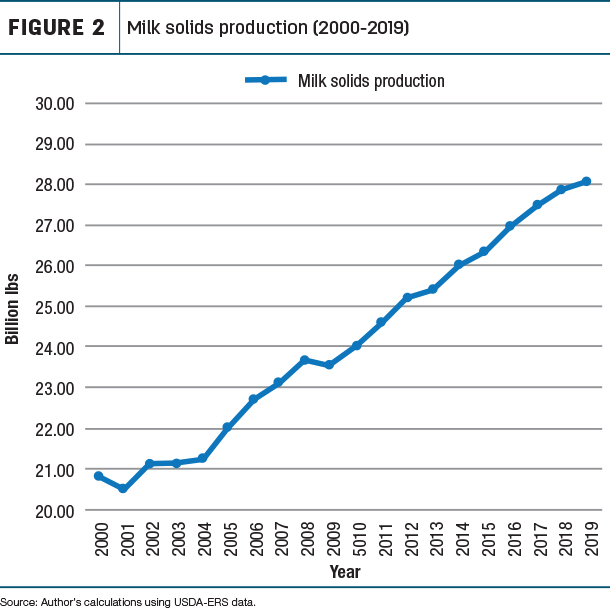 We need to point out, pounds of milk produced in 2019 was 0.34% more than 2018, about one-half of milk solids increase. About 75% of the nation’s milk production is manufactured into various dairy products and ingredients. The more solids in milk, the more pounds of manufactured products from the same volume of milk. Again, this shows measuring production by milk solids better indicates change in milk supply. 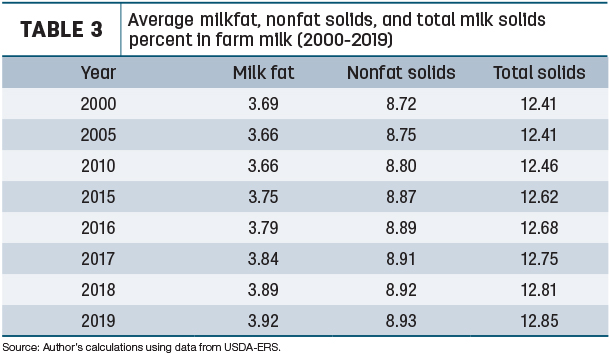 In looking at milk supply, we must also consider imports. Imports represented 2.6% of the milk solids supply in 2019. Since 2010, the percent of imports ranged from a low of 2.3% to 2.9% of the supply of milk solids. One important change in imported dairy products is the shift to milkfat. For the last three years, milkfat was over 70% of imported milk solids. Ten years ago, it was less than half of dairy imports. Butter is likely the main reason for the shift. The high domestic butter price relative to the world price, in recent years, made imported butter more competitive. Plus, the increased consumer demand for certain imported butter.