Editor's note: The Federal Reserve cut its benchmark interest rate on March 3, in an effort to support the economy in the face of the spreading coronavirus. The one-half percentage point cut lowered the benchmark rate to a range of 1% to 1.25%.

Based on quarterly lender surveys from Chicago, Dallas and Kansas City Federal Reserve districts, interest rates on most agricultural loans continued trending lower at the start of 2020 (Table 1). 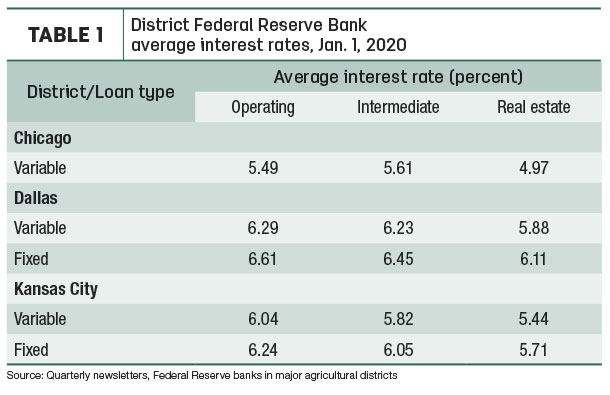 Federal Reserve Chair Jerome Powell told the House Financial Committee that the Fed’s interest rates are not likely to move higher in 2020 but warned that the coronavirus could negatively impact the global economy.

Latest estimates from the USDA show the 2019 decline in the number of U.S. licensed dairy operations was the largest since 2004. And, last year marked the largest year-over-year percentage decline registered since 2003, when the data was first collected.

While year-over-year declines in operations are nothing new, the striking increase in the loss of dairy farms in 2019 shows this challenging price environment proved to be too much for many operations throughout the country, according to Michael Nepveux, economist with the American Farm Bureau Federation. The Upper Midwest and the eastern Corn Belt lost the most licensed dairy farms. For more analysis, read: Largest Decline in U.S. Dairy Farms in 15-Plus Years in 2019.

The Pennsylvania Department of Agriculture, Bureau of Food Safety has issued a guidance document to Pennsylvania dairy processors outlining how milk may be labeled in relation to its fat content.

In its guidance document, the Pennsylvania ag agency said that milk labeling laws and regulations are established by the FDA, and that the federal agency only allows “% Fat Free” label claims on 1% low-fat milk or skim milk.

Milk measured at 3.5% natural milkfat could be labeled as “whole milk” or “3.5% fat whole milk,” for example.

The FDA defines whole milk as milk containing a minimum of 3.25% fat, up to 18% fat. Those who label milk with a specific fat percentage would have to assure compliance with that specific fat level to avoid conflicts with the federal labeling regulations.

The Pennsylvania Department of Agriculture is reviewing the federal labeling regulations to determine options for interested processors.

If you sold dairy cows, you may want to check to see how your tax preparer reported the income, advises Andrew Cerio, a tax specialist at Farm Credit East.

Writing in ag-specific tax provisions, posted in the Farm Credit East Knowledge Exchange, Cerio noted the 2017 Tax Cuts and Jobs Act brought about sweeping changes to the U.S. tax code. Some of those provisions may be overlooked if a tax preparer isn’t well-versed in the business of agriculture.

As an example, Cerio said income from the sale of dairy cows is not subject to self-employment tax and, if held for at least 24 months, can be taxed at long-term capital gain rates which are lower than ordinary income rates. If the tax preparer reported this as ordinary income on Schedule F instead, it may cause the farmer to pay a higher tax rate on certain cow sales.

The California Department of Food and Agriculture (CDFA) has changed the dates for a public hearing on a petition seeking to suspend a statute implemented to create the state’s Quota Implementation Plan (QIP, also called the Quota Administration Plan, or QAP). The hearing will be held April 7-8 beginning at 8 a.m. each day at the Visalia Convention Center, Visalia, California.

The Stop QIP Dairy Tax Coalition filed the petition, calling for suspension of a section of the California Food and Agriculture Code (Chapter 3.5), which would effectively terminate the QIP.

Meanwhile, the United Dairy Families of California (UDFC) continues to seek signatures for a separate petition seeking approval of a plan to establish a five-year sunset on the QIP.

The plan was originally submitted to CDFA. However, Karen Ross, California ag secretary, rejected the proposal on the grounds it was not submitted in the form of petition with the necessary signatures of at least 25% of California’s dairy producers.

The UDFC recommendation followed months of study and meetings seeking ways to resolve how state milk quota payments are funded and distributed. Under the proposal, California’s QIP sunsets on March 1, 2025. In the meantime, a Regional Quota Adjuster (RQA) will be modified to result in an equalized quota differential of $1.43 per hundredweight. The plan will give existing quota holders a cumulative payment of $300 per pound of solids quota, distributed over the five-year period.

Separately, Stop QIP filed a lawsuit last December, seeking to invalidate the QIP. A hearing is set for May 15 in the California Superior Court for Sacramento County.

The newly adopted rule defines which cattle are classified as BVDV-PI and requires the seller of a BVDV-PI animal to disclose the status in writing to the buyer prior to or at the time of sale. The new rule also establishes a BVDV program review working group who will meet annually to evaluate and review the current rules.

Bovine viral diarrhea is caused by BVDV, a pestivirus, and can affect cattle of all ages. The major reservoir responsible for the disease spread is the persistent infection syndrome in calves. Persistent infection can occur in calves if a female is infected during the early stages of pregnancy. BVDV-PI animals shed the virus for life and expose pen mates and adjacent cattle to the virus.

The new rule is published in the Texas Administrative Code under Title 4, Part 2, Chapter 44.

Schools and other educational institutions that purchase milk coolers for their meal programs are eligible to apply for up to $1,500 per proposal. A maximum of three proposals will be accepted for each organization or school district. Eligible costs include the cost of the equipment and associated installation expenses.

Applications for equipment grants must be submitted by 4 p.m. on April 17.