Dave Natzke
U.S. milk production closed out 2019 about the same way it began, capping a year that saw annual production grow just 0.3% compared to the year before.
Dave Natzke

December 2019 production rose 0.7% compared to December 2018, according to the USDA’s monthly Milk Production report, released Jan. 23. Based on that preliminary estimate, monthly year-over-year production grew 0.9% or less in 10 of 12 months during 2019.

December’s restrained growth was due to a slowdown in the increase in milk production per cow. And, cow numbers were unchanged from a month earlier, although the USDA again adjusted cow numbers higher for two previous months for both the U.S. and the 24 major dairy states.

Cow numbers up since summer

Compared to a month earlier, producers in Texas added 4,000 cows, with Kansas up 2,000 head. Producers in Pennsylvania and Wisconsin reduced herds by 2,000 head each, according to the USDA. 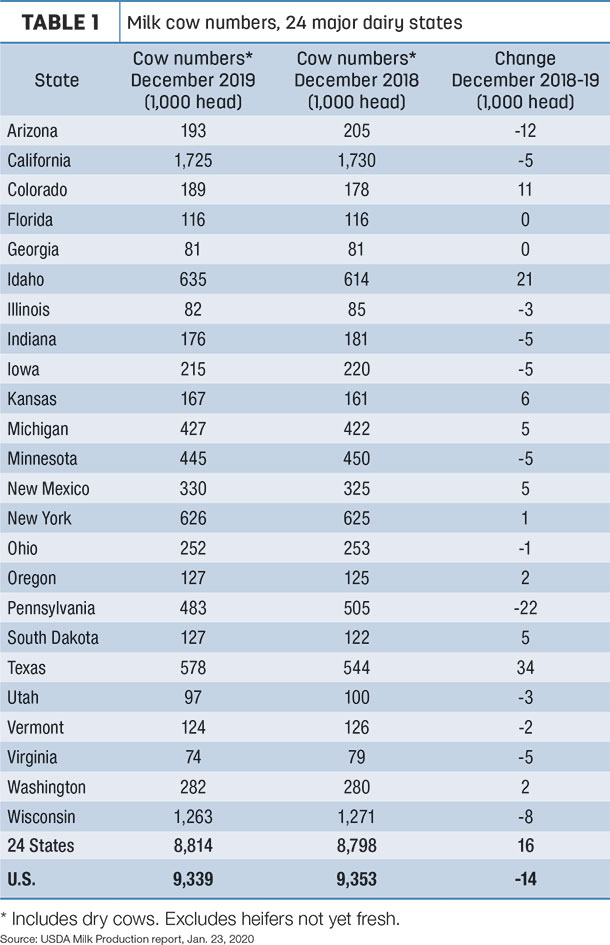 Looking at December’s preliminary estimates, year-over-year monthly growth in milk per cow slowed to about one-half pound of milk per cow.

Cows in 15 states yielded higher milk output per cow in December compared to the same month a year earlier (Table 2). Biggest gains were in Virginia and Pennsylvania (up 55 and 50 pounds, respectively). Cows in Oregon and Washington averaged declines of about 25 pounds each compared to December 2018. 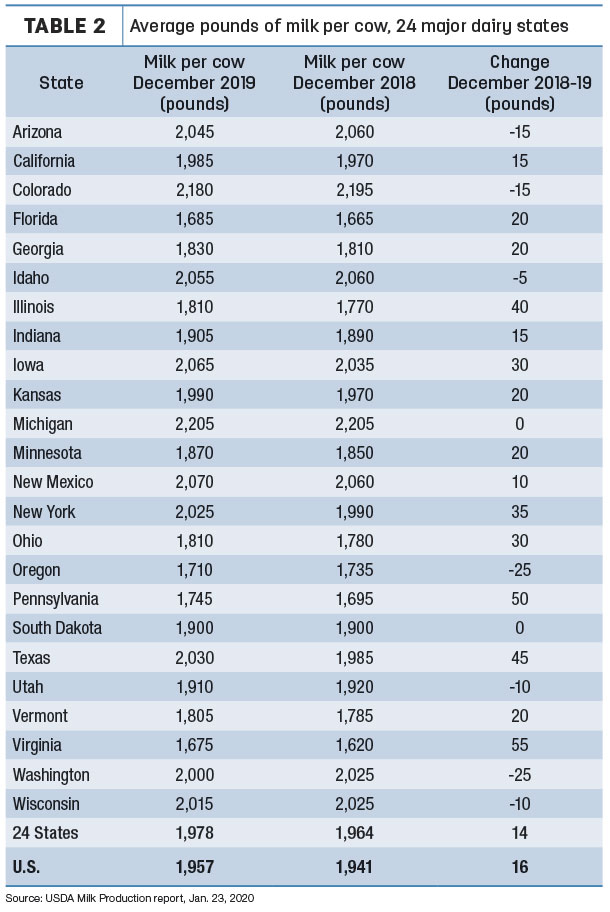 At 2,205 pounds, Michigan continued to be the national leader in milk output per cow on a monthly basis.

Among all major states, Texas led in terms of milk volume and percentage growth in December 2019, up 93 million pounds (8.6%) from a year earlier.

Progressive Dairy will provide analysis of national 2019 milk production, cow numbers and milk output per cow estimates when they become available from the USDA, and Progressive Dairy’s annual dairy statistics poster will be available in the April 1, 2020, issue of the magazine.

Cropp and Stephenson: Keep an eye on spring flush

Stephenson said cold storage data from the end of December showed that while cheese inventories shouldn’t be considered tight, they were moving more toward “comfortable” levels, helping add some bullishness to the Class III market.

In contrast, year-end butter inventories were up 6% from a year earlier, providing some continued softness to the butter market. That will, however, bring U.S. butter prices in alignment with global prices, which may aid butter exports.

Both Stephenson and Cropp agreed the small increase in milk production will support higher milk prices. December production per cow, up just 0.8%, is likely being held down by forage quality issues.

With the peak cheese-buying season now passed, the next big piece of information affecting the dairy market will be the strength of the spring flush production period, Stephenson said.

“If it’s a big flush, buyers will sit back and wait for prices to go lower,” Stephenson said. “If it feels like it won’t be a big flush, and we aren’t going to build product inventories like we normally do, I think folks are going to step in and buy early.”

Cropp agreed, and he doesn’t foresee a big spring flush coming. He questioned the latest USDA outlook forecasting a 1.7% milk production increase in 2020. Cropp said he believes that outlook is overstating milk production growth, and that feed quality challenges will restrict any large increase in milk production per cow. He also expects dairy farmers to continue to exit the business.

Other factors with a positive influence on dairy markets include strong U.S. cheese exports and softer global milk production. A cloud is the possibility of a global recession.

Cropp is sticking to his more optimistic milk price outlook. He sees first-quarter Class III prices in the strong $17s, reaching high $17s and $18s in the second quarter, and maybe even $19 per cwt by the end of the year.

Cropp said any influence of recent trade agreements will be longer term and won’t have a big impact on 2020 prices.