More major dairy states entered winter with larger on-farm dry hay inventories compared to a year ago, based on a semiannual hay stocks report from the USDA. For many, however, hay quality remains a question.

All hay stored on U.S. farms as of Dec. 1, 2019, totaled nearly 84.5 million tons, up 7% from a year earlier, according to the USDA. Despite the rebound, the total still represents the third-smallest inventory since 2006.

Overall, the largest increases in stocks from one year ago were seen in Kansas, Missouri, Montana, South Dakota and Texas, all resulting from increased production. Hay stocks levels for Dec. 1 were record lows in Connecticut, Illinois, Indiana, Maine, Minnesota, Pennsylvania and Rhode Island. 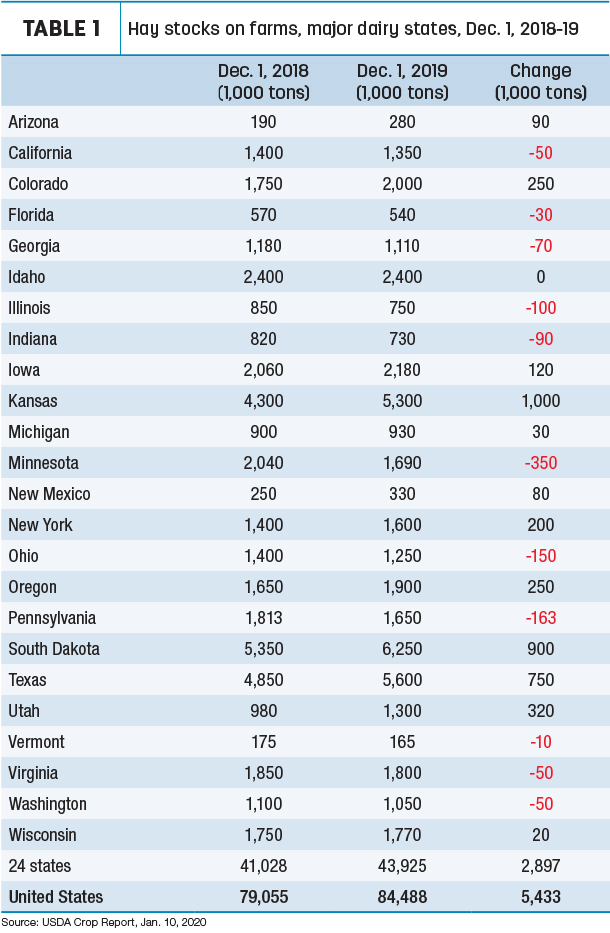 Dairy states with largest hay inventory increases compared to a year earlier were Kansas (up 1 million tons) and South Dakota and Texas, up 900,000 and 750,000 tons, respectively.

Decliners were led by Minnesota, where hay stocks were estimated to be down by 350,000 tons. Pennsylvania and Ohio inventories were down 163,000 tons and 150,000 tons, respectively.

The Calgren facility now collects methane from more than 66,000 cows at 10 area dairy farms. Calgren partnered with Maas Energy Works to develop the four new dairy digesters, adding to six dairy digesters that have been operating since 2018. The additional dairies are projected to nearly double the amount of RNG produced at the facility, further reducing greenhouse gas emissions and displacing more traditional natural gas. After processing, the RNG is injected into SoCalGas' system.

The Animal Agriculture Alliance launched a new website and updated resources to help farmers, ranchers, veterinarians and others engage in conversations about animal agriculture.

One of the newly updated resources is the animal welfare activist groups web. The web details how activist groups are connected through funding, project collaboration, and flow of staff and volunteers.

The USDA’s Dairy Margin Coverage (DMC) Decision Tool estimates margin ranges and payment probabilities based on current milk and feed futures prices. After peaking at $12.21 per hundredweight (cwt) in November 2019, DMC monthly margins were expected to move lower in December 2019 (to be announced on Jan. 31) and into the first half of 2020.

As of Jan. 6, the USDA reported that 12,866 operations, or 47.2% of operations with production histories, had enrolled in the 2020 DMC program. About 114.4 billion pounds of milk, or about 55% of total annual established milk production history, was covered for 2020.

Republican Kelly Loeffler was formally sworn in as the newest U.S. senator from Georgia, replacing retired Sen. Johnny Isakson. Among her appointments, Loeffer will serve on the Senate ag committee.

Loeffler’s term is short; she’ll be up for re-election this November.

U.S. Rep. Dina Titus (D-Nevada) introduced the Opportunities for Fairness in Farming (OFF) Act, a bill that proponents say will add accountability and transparency to producer-funded checkoff programs.

The legislation, H.R. 5563, would prevent USDA checkoff programs from paying organizations that lobby on agricultural issues, prohibit anticompetitive behavior, ban activity that involves a conflict of interest and require audits to ensure compliance. It has been referred to the House ag committee.

The U.S. Dairy Export Council’s Alan Levitt, vice president of market analysis and communications, and William Loux, global trade analyst, have compiled a list of factors that are most likely to influence dairy trade in the year ahead. These eight “signposts” will help guide the direction of global dairy markets and influence U.S. dairy export performance in 2020. They include:

1. Impact of the U.S.-Mexico-Canada Agreement (USMCA) and Japan trade deals, and further talks with Japan

6. Buyer (and consumer) willingness to spend more for dairy

7. Milk production is coming back, but growth will still be modest.

Get more details on the U.S. Dairy Exporter Blog.

Hawaii’s Big Island Dairy is out of business, but it met all of the state department of health’s enforcement actions to address water pollution act violations.

According to Keith Kawaoka, the health department’s deputy director of environmental health, the former 2,500-acre dairy operation met requirements that included: stopping all milking and creamery operations, eliminating its wastewater system, removing all dairy cows from confinement and reducing its herd to nearly zero and paid $87,000 to the Center for Food Safety to complete environmental projects. The Center for Food Safety represented the local citizens group that filed a federal lawsuit against the dairy owners for Clean Water Act violations.

“It’s disappointing that Big Island Dairy was unable to fill the need for local milk and milk products, while also meeting all federal and state environmental regulations to protect local communities and our delicate ecosystems,” Kawaoka said.

In 2019, DOH issued an administrative order requiring the dairy owners to ultimately cease discharging wastewater, pay either a monetary penalty or support a DOH-approved environmentally beneficial project. Due to factors associated with its operation, owners of the dairy decided to close its business and seek the sale of its assets in late 2019.

With Coca-Cola finalizing the purchase of fairlife LLC, the company has debuted fairlife creamers. The line of premium products, made with ultrafiltered milk, is available in four varieties: hazelnut, caramel, vanilla and sweet cream.

Average milk hauling charges in the Upper Midwest Federal Milk Marketing Order (FMMO) rose in 2019, although the increase was lower than the year before.

A summary of an annual study, “Milk Hauling Charges in the Upper Midwest Marketing Area, May 2019,” shows the simple average hauling charge for all producers was 48.5 cents per cwt, up from 46.8 cents (about 3.7%) per cwt the year before.

As a producer’s milk volume increased, the average hauling charge on a per-hundredweight basis decreased. The weighted average cost across all milk deliveries was 29.6 cents per cwt, up from 27.8 cents (6.4%) per cwt in 2018.

The report, prepared by Corey Freije with the Upper Midwest market administrator’s office, examined hauling charges to the first point of delivery for 4.1 billion pounds of milk from 10,831 producers in FMMO #30. Milk volume was up about 12 million pounds, but producer numbers were down 586 from the year before.

Other highlights of the summary include:

The hauling charges consist of deductions shown on producer payrolls, submitted to the FMMO administrator’s office by handlers. Charges may not necessarily reflect the actual cost of the hauling because in some cases, handlers or cooperatives waive or subsidize hauling costs. Also, some producers pay the hauling costs directly.

Once published, full studies are posted on the Upper Midwest FMMO website.