Several major dairy states entered winter with substantially lower on-farm hay inventories compared to a year ago, based on a semiannual hay stocks report from the USDA.

All hay stored on U.S. farms as of Dec. 1, 2018, totaled 79.1 million tons, down 6 percent from a year ago, according to the USDA’s Crop Production report, released Feb. 8. This marks the lowest Dec. 1 hay stocks since the drought of 2012 and second-lowest inventory for that date since 1977.

Based on preliminary 2018 hay estimates, last year’s acreage, yields and total production were down from 2017. About 64 percent of all hay produced last year was in storage on Dec. 1, 2018.

Whereas last year much of the hay inventory declines were located in the drought-stressed West, this year’s numbers are more geographically diverse. One common theme is that many of the states where hay inventories are lower are also states where the nation’s 9.4 million dairy cows reside (Table 1). 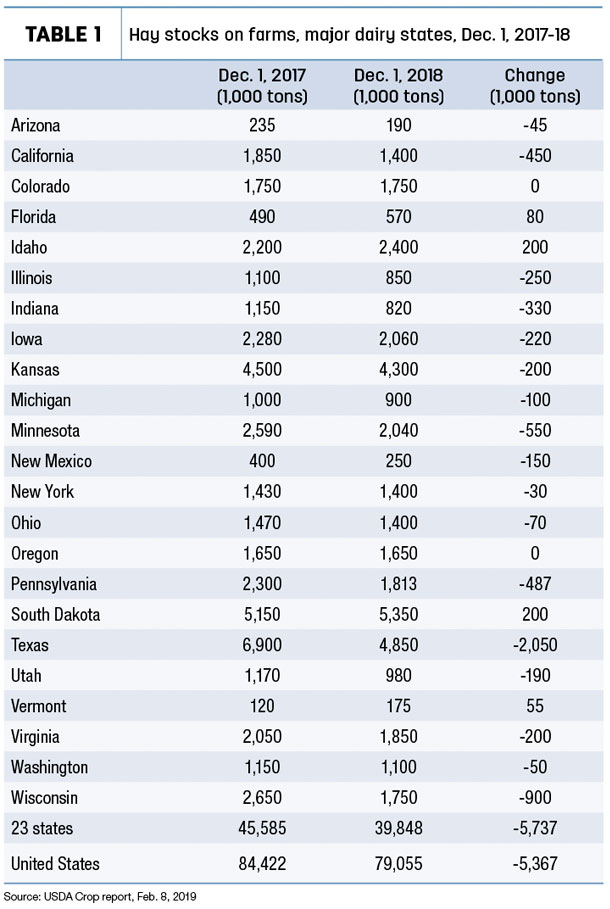 Among the 23 “major” dairy states listed by the USDA, 17 had less hay in storage compared to a year ago. Decliners were led by Texas, where hay stocks were down by a whopping 2.05 million tons. Wisconsin and Missouri hay stocks were each down 900,000 tons. Hay inventories slipped by 450,000 to 550,000 tons in Minnesota, Pennsylvania and California.

States with largest hay inventory increases compared to a year ago were North Dakota, Montana and Nebraska in the Northern Plains, and Tennessee and North Carolina in the Southeast.

The University of Idaho will pay $2.5 million, while the Idaho Dairymen’s Association (IDA) will contribute $2 million to the purchase of the land from the Whitesides family, who will in turn donate another parcel of land.

The land will house a research dairy, one of several south-central Idaho-based facilities planned as part of the $45 million Idaho Center for Agriculture, Food and the Environment (CAFE) initiative. When completed, the project will include the research dairy – said to be the nation’s largest — an outreach and education center, and a food-processing component.

IDA members first began working with the University of Idaho 15 years ago on the project.

“One of our key focuses will be to have this dairy represent what this industry looks like in the West,” said Rick Naerebout, IDA chief executive officer. “Being the largest research dairy in the country will help support the industry and put Idaho on the map as a premier location for environmental research.”

Brandon Whitesides, who is selling the property with his sister, Stacey Jackson, and father, Brent, said the family’s goal is supporting the dairy industry. As a student at Brigham Young University, he worked at the 500-cow university dairy. BYU no longer operates the dairy.

In 2017, the Idaho Legislature appropriated $10 million to help finance the project, with an additional $5 million investment anticipated as the project progresses.

Craigs Creamery, a joint venture of eight New York dairy farms and Dairy Farmers of America (DFA), has launched a branded cheese line. The marketing strategy carries a “sustainable” message to consumers, highlighting the brand’s locally sourced, high-quality milk and a focus on the environment.

The operation maintains the tradition of family farming while incorporating the forward-thinking, innovative practices of modern agriculture. One of the farms features a biodigester that powers the creamery. In addition to processing dairy manure, the digester also handles food waste that otherwise would have gone to a landfill. Other practices include solar panels and extensive water recycling.

County soil and water conservation districts can apply for the grants on behalf of eligible farmers. The maximum award amount per proposal is $385,000, which includes funding for engineering and construction expenses. Grants can be used to help CAFO-permitted farms offset the cost of manure storage construction, site preparation and associated best management practices.

The program, administered by the New York Department of Agriculture and Markets, funds projects designed to meet state department of environmental conservation requirements. Since the program's launch, nearly $32 million has been awarded to 89 farms. New York has more than 500 CAFO farms, most of which are dairy farms with 300 or more cows.

The application and additional information are available on the New York State Department of Agriculture and Markets' website.

Natural gas produced by Calgren’s Dairy Fuels, a dairy manure digester facility in Pixley, California, has, for the first time, been injected into the Southern California Gas Company (SoCalGas) pipeline, the companies announced.

Calgren's facility is a dairy digester pipeline cluster, collecting biogas from anaerobic digesters at 12 Tulare County dairies, then cleaning it to produce pipeline-quality renewable natural gas. The cluster is expected to add nine other dairies later this year, making it the largest dairy biogas operation in the U.S. The facility will capture the methane produced from the manure of more than 75,000 cows. SoCalGas will be capable of adding up to 2.26 billion cubic feet of renewable natural gas each year to its pipeline system from the facility, enough to fuel more than 1,200 Class 8 heavy duty trucks.

Renewable natural gas can be produced from dairy manure, food waste, landfills, wastewater treatment plants and other sources. Capturing this otherwise wasted gas and turning it into a renewable fuel significantly reduces greenhouse gas emissions from these waste sources.

The Calgren project and others like it are partly funded under California's Dairy Digester Research and Development Program, which aims to reduce greenhouse gas emissions from manure generated at state dairy farms.

There are currently 24 California dairy methane capture projects either operating or in development, and officials estimate there could be as many as 120 projects funded and operating in next five years.

Did you know: Who holds farm debt?

There are a variety of creditors that lend into agricultural credit markets. John Newton, chief economist with the American Farm Bureau Federation, provided a summary of institutions holding farm debt at the end of 2017 (Read: Who holds farm debt?)

Leading creditors, ranked by volume and percentage of total farm-sector debt at the end of 2017, were:

While the Farm Credit system was the second-largest creditor in agriculture at the end of 2017, these customer-owned cooperatives were the largest creditors in farm real estate, holding about 45 percent of the total.

For non-real estate debt, the largest creditors in agriculture are commercial banks, holding nearly 50 percent of the total. The Farm Credit system held about 33 percent with individual creditors holding 17 percent.

Class IV milk prices could continue to be the “higher of” in comparison to Class III prices throughout 2019, although the gap will narrow in the latter half of the year, according to the USDA’s February 2019 Livestock, Dairy and Poultry Outlook report.

The midpoint of the forecasted range for Class IV prices changes little during 2019, remaining near $16 per hundredweight (cwt) in each quarter. The projected Class III price improves incrementally throughout the year, but the weak first and second quarters leave the 2019 average at $15.05 per cwt at the midpoint.

Following a decline in the number of milk cows in November and relatively high slaughter rates during December, the forecast for the size of the milking herd has been lowered 5,000 head for the first half of 2019; however, the rounded estimate for the year remains at 9.365 million head. Based on relatively weak yield growth continuing in November, the 2019 milk per cow forecast has been lowered 50 pounds to 23,505. These changes result in a milk production forecast of 220.1 billion pounds for 2019, 0.5 billion pounds lower than the previous forecast.

The “Healthy Climate-Friendly School Lunch Act” (AB 479), was sponsored by Adrin Nazarian (D-Van Nuys), a member of the California State Assembly. The bill is co-sponsored by Animal Hope in Legislation, Friends of the Earth, Physicians Committee for Responsible Medicine and Social Compassion in Legislation.

The bill does not mandate plant-based diet in schools, but incentivizes schools to offer plant-based options, according to the sponsoring organizations.

The bill would also include state support for staff training, student engagement, recipe development and other technical assistance to move public school toward plant-based lunch programs.

The USDA’s February Crop Production report indicated last year’s weather challenges led to the loss of substantially more cotton acreage than anticipated earlier, according to Nigel Adcock with Cottonseed LLC. The report estimated 2018-19 cottonseed production at 5.79 million tons, down 64,000 tons from a December estimate, and down more than 628,000 tons from the 2017-18 crop.

Most of the cotton crop acreage reduction resulted from the drought in Texas and hurricanes and flooding in Georgia. Total U.S. cotton acreage abandonment was estimated at 26 percent. There is further downside potential. About 10 percent of the 2018-19 cotton crop remains to be harvested and is in very poor condition with samples containing sprouted seeds, Adcock said.

In addition to the USDA report, the National Cotton Council (NCC) published their annual economic outlook. Based on surveys, growers intend to plant 14.2 million acres for the 2019-20 crop year, up about 2.8 percent from a year earlier.

Based on normal acreage abandonment (10 percent) and yield trends, cottonseed production would total about 7 million tons. That would be the largest cottonseed crop since 2006.

Initial 2018 numbers are out and fluid milk sales continued to decline, according to the USDA’s Dairy Market News. Here’s a summary:

Prices for all major product categories were modestly higher:

The report, prepared by Corey Freije with the Upper Midwest market administrator’s office, examined hauling charges to the first point of delivery for 4.1 billion pounds of milk from 11,417 producers in FMMO #30. Milk volume was up about 60 million pounds, but producer numbers were down 690.

Highlights of the study include:

Read also: Hauling charges a drag on basis in Midwest.

Modest growth forecasts, shifting consumer tastes and increased domestic competition mean dairy companies will need new strategies at home and abroad to capture growth, according to research presented at the International Dairy Foods Association 2019 Dairy Forum. About 1,000 dairy executives from across the country attended the event, held in late January in Orlando, Florida.

The presentation, “Resilience and Growth: Perspectives from McKinsey & Company,” summarized interviews with 30 chief executive officers of international dairy companies and findings from a survey of more than 1,000 American households. McKinsey’s Roberto Uchoa de Paula, Ludovic Meilhac and Christina Adams told the dairy forum attendees that U.S. dairy manufacturers have the option of chasing international opportunities or competing for share in their home market.

Their report’s findings revealed that globally focused companies have increased their revenues significantly from 2007 to 2018, while those active in local markets have seen their revenues fall. Dairy’s future is global, the consultants stressed, and the greatest gains lie in markets beyond American borders, primarily in Africa and Asia.