State of the Dairy 2019: Southeast: Weathering the storm

Dave Natzke
When final numbers are in, 2018 milk production in the 10 Southeast states will be down about 4 percent from 2017, according to Calvin Covington, retired dairy co-op executive.
Dave Natzke

In Florida and Georgia, which produce about 45 percent of the region’s milk, output will be down about 4.5 percent.

Dairy producers in the Southeast continue to weather the storm – literally and figuratively – with mounting concern and frustration, said Farrah Newberry, executive director of the Georgia Milk Producers. Last fall’s hurricanes, Florence and Michael, resulted in heavy financial and structural damage to the region’s agriculture, and dairy was not spared. Hurricane Michael’s economic impact on Georgia’s dairy industry alone was estimated at $12 million.

The dairy economy is having a more lasting impact. And while forecasts that regional milk prices will be $1 to $1.50 higher in 2019 are welcome, most producers don’t believe it will be enough to recover losses incurred from the last four years.

“Producers are making every effort to squeeze production costs and trying to stay positive,” Newberry said.

Dairy farm exits aren’t new to Georgia. In the latest cycle, Newberry is seeing the loss of many small (under 200 cows) dairies, as well as third- and fourth-generation “legacy” farms. Contributing to the overall decline in milk production, cow numbers and dairy farms are the seasonal supply programs implemented by co-ops in 2017-18, in an effort to manage and even out supply and demand.

“For those still operating, they are adjusting calving seasons and scaling back on cow numbers to ensure they aren’t penalized for overproducing during surplus months,” Newberry said.

Moving up the coast, the latest round of dairy farm exits is different this time around, said Brittany Whitmire, dairy extension associate with North Carolina State University.

“Until mid-2018, a significant number of dairy cattle leaving those farms were simply moving to other dairies and remaining in production,” she said. “More recently, more (cows) have been sold for slaughter, so the exit of farms concerns me more in terms of infrastructure and logistics.” 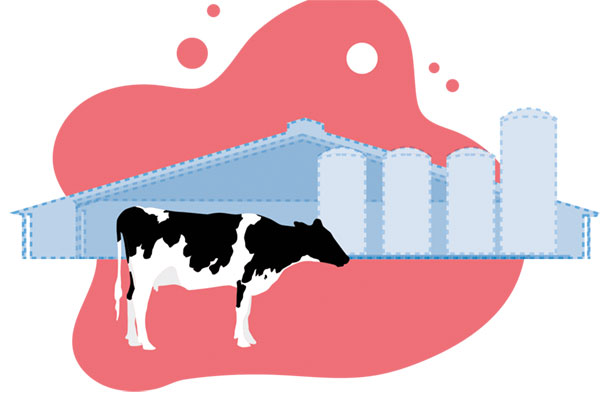 For producers shipping less than a tanker load a day, being the “last one standing” increases hauling costs and results in other lost efficiencies. Those geographically distant from “dairy centers” face lack of access to service providers – feed dealers, equipment suppliers and veterinarians – who must increase their service coverage or focus less on dairy to compensate for the loss in concentration of clientele.

Whitmire said she’s working with farm families making the difficult decisions to exit dairying as the result of accumulating farm debt. In some cases, a proactive decision makes sense for the owner-operators because of their life stage and other factors. In other, more heart-wrenching cases, leaving dairying is a reaction to the acute financial and mental stress of dealing with prolonged negative margins.

“In all cases, the decision to exit is difficult, but it is really essential not to equate exit to failure,” she said. “For anyone in the dairy business today, it’s essential to have open conversations with all the stakeholders … to move the business along in 2019.”

“Dairy farmers are resilient and resourceful folks, but they are tired,” Whitmire said. That’s required changes in the focus of extension programming. While adding programs on dealing with farm financial stress and mental health, there’s also been increased interest in regional programming focused on value-added dairying and other alternative income opportunities.

As of early 2019, Kentucky lost nearly 100 of the 600 dairy farms that were in business on Jan. 1, 2018, said Maury Cox, who is retiring as executive director of the Kentucky Dairy Development Council. Some of those were farms receiving cancelation notices of milk purchasing contracts by Dean Foods in March of 2018.

Depending on the individual market, balancing costs, hauling charges and evaporation of remaining premiums are resulting in mailbox milk prices $2 to $4 per hundredweight (cwt) below federal order blend prices, Cox said. Concern over the future extends all the way to the state’s Amish communities.

Herd size in Kentucky is now about 100 head. Production per cow is climbing but is still under the national average. Milk quality has improved significantly, but recent Dairy Herd Improvement Association reports indicate somatic cell counts average are inching up as milk prices have fallen. Most Kentucky dairy producers will say their cost of production is in the $17- to $20-per-cwt range.

“Going into 2019, it is evident that unless a plan to curb production, such as a base/excess or a two-tier pricing program, is implemented nationally and managed regionally, the long-term future for the medium to small dairy farms becomes even more difficult,” Cox said.

Southeast Milk Inc. (SMI) is a co-op with about 150 members in six states, mostly in Florida and Georgia but extending into Alabama, South Carolina, Mississippi and Louisiana. Producers in the membership area are “uneasy and truly beaten down,” said Jim Sleper, chief executive officer. “Tempers are high and patience is short right now as producers hope for a better tomorrow.”

Labor and transportation shortages compound challenges brought on by the potential of a fifth consecutive year of lower milk prices, Sleper said. Even some historically profitable producers are starting to feel the pinch, and any thoughts of dairy farm expansion have been put on hold.

Like Covington, Sleper said the region is seeing milk production decline at a fairly significant rate. In a cloudy dairy economy, that has created one silver lining: SMI, long on milk in 2017, saw milk supplies much more in balance in 2018, easing pressures on an area with few local balancing options for surplus milk.

“Those of us in the Southeast encounter much greater cost in surplus disposal than costs associated with importing milk,” Sleper said. With lower balancing costs, dairy farmer “basis” improved somewhat, despite lower milk prices. “While not where we would like it to be, this basis movement is a positive sign moving into 2019,” he said.

But lower local milk production, in a region of population growth, means milk has to come from somewhere. An increasing portion of the Southeast fluid milk deficit is being met by processed-packaged milk from neighboring states versus movement of raw milk into the Southeast for processing and packaging.

Infrastructure poses challenges, as processing facilities in the Southeast are outdated and lack the equipment for new product lines or packaging, Newberry said. That’s created marketing openings for others. “Packaged milk from outside of the Southeast continues to flood our market,” Newberry said.

According to Covington, 2018 blend prices in the three Southeastern federal orders – Appalachian, Southeast and Florida – averaged about $1.50 per cwt lower than 2017. Looking to 2019, he forecasts prices will return to 2017 levels, with no expected increases in over-order premiums or balancing costs.

While Covington said he’s heard from some dairy producers who want to expand, there are three limiting factors: profitable milk price, permitting and market for the additional milk production.

“Number three may be the most limiting,” he said. “In the Southeast’s fluid milk market, there is less need for additional milk production due to the continuing decline in fluid milk sales.”

Regional labor shortages are creating growing interest in technology. According to Newberry, Hillcrest Farms in Dearing, Georgia, will install the first milking robots in the state this spring. “Our producers are curious to see how the owners, employees and cows adapt to this new technology. If robots are successful in filling our labor void, then I predict many farms will look into this technology,” she said.

Dairy consolidation occurring at producer, processor and retailer levels raises other questions. “Dairy farms get larger while smaller farms fall off,” Sleper said. “The food industry now features big-time players like Walmart, now in the milk processing game, and Amazon, who purchased Whole Foods. New cheese facilities that can process several million pounds of milk a day are being built. Many SMI members continue to ask: Where this is leading the dairy industry for the future?” Sleper concluded.