State of the Dairy 2019: Northwest: Economic toll adding up

Email Dave Natzke
press deadline, more than 1,830 dairy cows in Washington’s Yakima Valley reportedly perished as a winter storm hit the county, dumping up to 2 feet of snow and carrying 30- to 80-mile-per-hour winds.

While it may be too early to tell what lasting effect the storms will have on dairy production, the losses compound the financial stress faced by farmers from several years of low milk prices.

The ongoing financial picture has turned the producer mood negative in Idaho, according to Rick Naerebout, chief executive officer of the Idaho Dairymen’s Association (IDA).

“Three years of breakeven or less financial performance is wearing on producers, and they are reaching the point of mental fatigue and losing desire to continue to battle through the losses,” he said. “Nearly every dairyman I have talked with has stated they lost money in 2018. We are hearing of more dairies finding themselves in the special assets category with their lenders.”

Some states are reporting 10 percent of dairy farms exiting the business year-over-year. “So far, we have not seen losses of farms at near that level in Idaho, but we could without significant financial recovery in the near future,” Naerebout said.

About 15 of the state’s dairies sold out in the latter half of 2018. The largest herd dispersal was 17,000 animals, in December, when the dairy lost its milk market and was left with little choice but to sell the herd. It’s a trend that’s expected to continue into the early part of 2019.

“A number of dairies are still without a solid market and are selling milk at distressed prices,” Naerebout said. “That world gets a lot messier once we reach the flush season and market access gets even more difficult to come by. The milk has to be shipped farther and farther away to find a home.”

Idaho’s cow numbers (+12,000) and milk production per cow both grew in 2018, not a recipe for price recovery in an oversupplied market. However, that growth could be attributed – at least in part – to even weaker dairy replacement heifer and cull cow prices.

“I think a lot of this is due to the fact dairymen were not left with any good options on selling animals out of their herds,” Naerebout said. “Many have excess heifers, but you cannot sell them without taking substantial losses. Heifer values are noticeably less than what you have into her cost of raising.

“Cull cows were worth less than 40 cents per pound on a good day, and below 30 cents per pound much of the time, so there is not a good cull market to sell animals into either,” he said. “Both situations incentivized dairymen to hang onto animals they otherwise may have sold. You also have the consideration for those struggling financially that (a cow) is worth 1,400 dollars to the bank in their loan-to-value calculation, and they simply cannot afford to sell her without putting themselves in a worse position with their lender.”

When it comes to milk, the Idaho market remains “significantly oversupplied,” Naerebout said.

Processing capacity is expanding. The Magic Valley Quality Milk Producers invested $20 million in a facility at Jerome, Idaho, enabling them to condense milk, reducing freight costs for some of the milk leaving the market.

And Idaho Milk Products is expanding capacity by 1 million pounds per day, although most of the benefit will be for growth opportunities for their producer owners more than the general marketplace, Naerebout said.

“A few other companies are taking a look at Idaho for processing, so there is optimism we may work our way out of our oversupplied situation over the next few years,” he said.

“Plant-based beverages masquerading as ‘milk’ are only going to increase,” Naerebout said. “Consumer/customer inquiries into farm-level practices from animal husbandry to environmental practices to worker well-being are ever-present and growing.”

Those pressures will likely lead to an increase in the rate of consolidation in the dairy industry over the next few years.

“The irony is: The consumer groups putting much of the pressure on the industry want to see smaller farms survive, yet those are, more often than not, the ones their activities are pushing out of business.”

One new development that could aid Idaho dairy producers in the future is the announcement that the Idaho State Board of Education approved the purchase of land for a University of Idaho research dairy.

Jim Werkhoven, Werkhoven Dairy, Monroe, Washington, is a member of the Northwest Dairy Association (NDA), a cooperative with about 450 dairy farm members in four states: Washington, Oregon, Idaho and Montana. He characterizes the mood of fellow dairy producers in the Pacific Northwest as “frustrated and concerned.”

“We knew the first half of 2018 was going to be tough, but when the market failed to go up in the second half as was commonly expected, it took a lot of the optimism away from producers,” he said. “For many producers, the milk price has been too low for too long. I have visited with normally progressive, optimistic dairymen who are now worried about keeping the lights on.”

Heading into the new year, a “decent” crop year in 2018 has boosted milk production per cow slightly. However, plant capacity in the Pacific Northwest is full.

Darigold, a subsidiary of the NDA and one of the area’s prominent processors, was scheduled to implement a production base program on March 1, 2019, assessing penalties on any milk produced above a farm’s base. 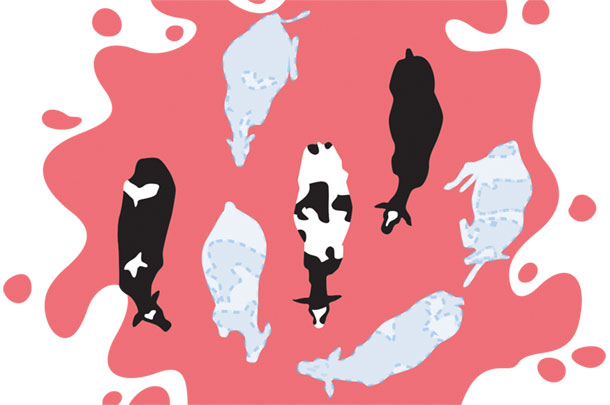 Darigold handles approximately 10 billion pounds of milk annually, operating 11 plants throughout the Northwest. It is using innovation to improve marketing conditions, launching FIT, an ultrafiltered, lactose-free, high-protein/low-sugar fluid milk, and preparing to roll out a new, premium European-style butter. And the company has changed its export business dramatically in the past year, developing direct relationships with customers instead of working through a broker.

Dairy remains under the environmental microscope in the Pacific Northwest, and attention has become even sharper following regulatory and legal publicity related to Lost Valley Farm in Boardman, Oregon. Bills introduced in the Oregon Legislature would classify dairies with 2,500 cows or more as “industrial” rather than agricultural operations, requiring more oversight. The proposals also include a moratorium on new construction of large dairies while their environmental and economic impacts are studied.

Oregon lawmakers are also considering a proposal to implement a carbon “cap and trade” policy, aimed at controlling greenhouse gas emissions. While agriculture would be exempt, dairy and ag leaders fear the impact will be higher fuel and energy costs, costs producers can’t pass along.