Yet it is often one of the most difficult areas to assess in a timely manner, given the lag present in how common start-up milk measurements are calculated.

Start-up milk is likely a measurement you are already focused on, whether you are monitoring week four milk, looking at average milk in the fresh pen or using second-test-day 305 milk to assess early lactation performance.

When you make a change in the transition period, whether it is by adding supplemental fat, altering fresh cow treatments or changing close-up pen movement protocols, how do you assess the impact of that management change? Start-up milk is one of the most visible ways to assess if there was tangible improvement or if the changes did not create the desired result.

Let’s look at the most common measures for start-up milk performance and the pitfalls from these measures.

While weekly milk plots are not brand-new to DairyComp, it is a hidden gem that does a great job at reducing lag in monitoring start-up milk while providing a built-in cohort analysis to compare how cows started up over the past year.

Weekly milk plots can be created using DC305’s “PLOT” command that plots weekly milk (WMLK1 item) over the lactation and by breaking the data down “by stage” (Figure 1) or “by month fresh” (Figure 2), which gives you a visual of how cows are starting up over time versus other cohort groups. 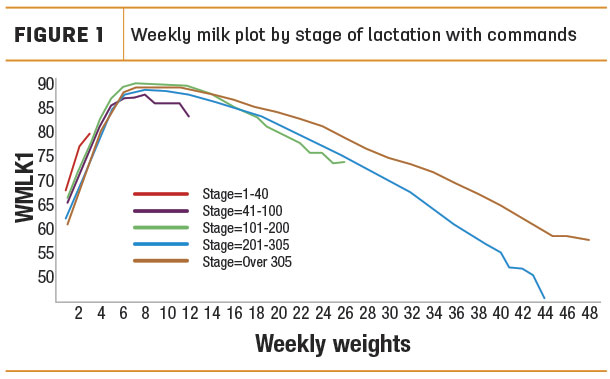 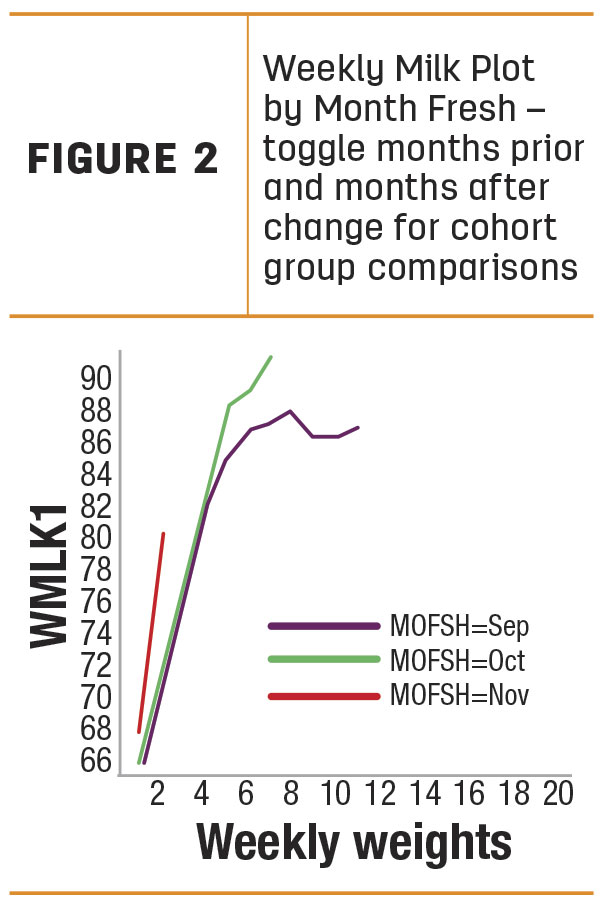 The third way to utilize weekly milk plots is to plot data for an on-farm study where cows are coded to different groups (Figure 3).

The good news is: The weekly milk item already exists for daily milk weight herds, as that is a roll-up of their daily milk weights into a weekly number. For monthly test-day herds, the weekly milk is an estimation based on their test-day data, which is similar to how week four is calculated, but some of that lag time is removed since the data is calculated for weekly versus monthly values.

Since there can be variation in the percent of first-lactation versus older cows, it is a good idea to run the weekly milk plots by lactation group to give the most accurate comparison. Also, pay attention to seasonal impacts, as hot summer months will impact the lactation curve.

As you look to what you want your herd to accomplish in 2019, add weekly milk plots as an early indicator on positive or negative impacts in the transition period. Early awareness that something has changed can help you make adjustments early versus waiting until the impact is evident in the bulk tank.