Walt Cooley
Temperatures at World Ag Expo 2019 started out colder than usual, and skies that began clear progressively clouded over. The final day of the show was wet and blustery. During the drier parts of the show,
Walt Cooley

Email Walt Cooley
Progressive DairymanEditor Walt Cooley found the newest products that may be of interest to dairy producers. Below are his thoughts on what he found. 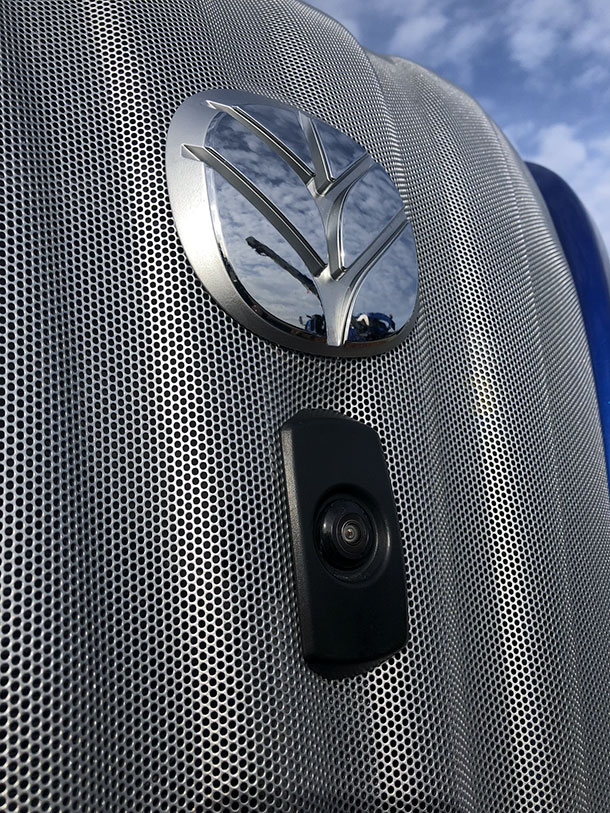 One of the cool new features of New Holland’s T8 series tractor is an embedded front-grill camera with in-dash display. The new 180-degree camera is a safety feature to improve visibility for the driver. For example, the driver can now poke the front of the tractor out of a barn to check for other equipment traffic without having to drive most of the tractor out into view before he or she can see clearly around obstacles.

The video feed when activated also shows up in the steering wheel dash so the driver can keep watch on the horizon ahead. The new feature is just one of many new safety features, driver comforts and customizable controls of the company’s tractor cab. The tractor’s technology platform is also “autonomous ready.”

These technology upgrades move tractor use one step closer to “supervised autonomy.” In explaining the new equipment line, company reps said that soon field operators may only “be watching for obstacles that aren’t usually there.” 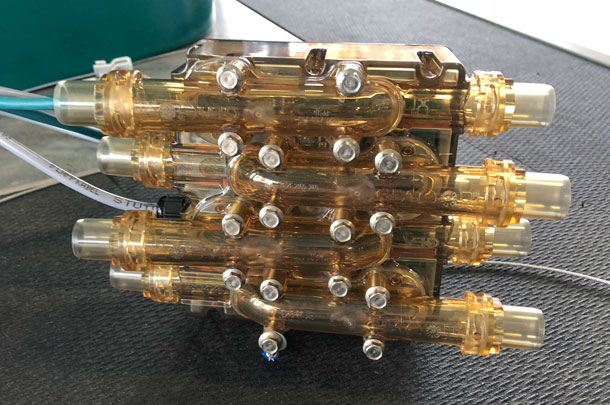 A flow-through, in-line mastitis sensor was new from GEA at the show. The sensor requires no reagents or separation of milk to sample milk for somatic cell counts (SCC). The company claims the product is the first continuous, individual quarter SCC monitor in the industry. It uses patented electrical permittivity threshold (EPT) technology to test milk. There’s a lot of physics involved in how it’s testing the milk. In short, the company claims this technology is capable of early detection to help minimize treatment time. It has proven useful in Europe; more than 100 units are in use there. The unit is available only with installs of the company’s DairyProQ robotic rotary or box-style dairy robots. 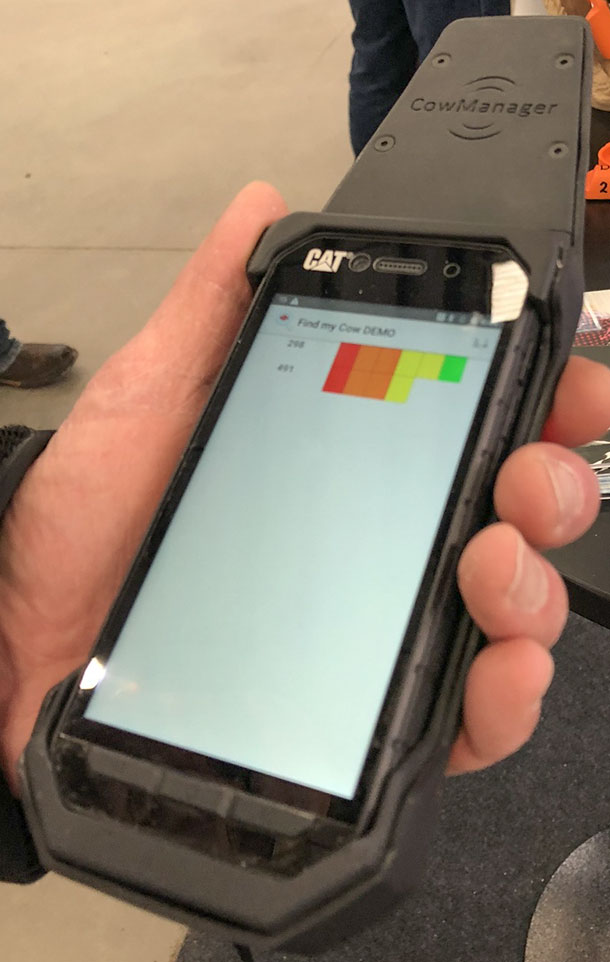 Locating cows via beacon was a new feature presented by CowManager and its Find My Cow technology. The company’s activity monitoring eartags can now broadcast a signal to aid in locating cows in a pen. The signal is received by a rugged cell phone provided by the company. The cell phone receiver has a stubby directional antenna with a 30-degree reception radius that shows visually on the screen when the user is getting closer to the cow sought after. When pointing directly in the direction of the beacon, the cell phone vibrates, indicating it’s found the right cow. Multiple cows can be searched for at the same time. The unit can also time stamp when the cow was located and by what user.

Managers can activate the beacon of the cows who need to be located on desktop herd management software, send an employee with the locator cell phone and get to finding cows in need of attention. The beacon will send out signals for predetermined time frames. The new unit may be useful for dairies using the company’s activity monitors for breeding and health monitoring. Users interested in the technology would need to buy the rugged cell phone and activate the cow-finding feature in their pay-for-service package. 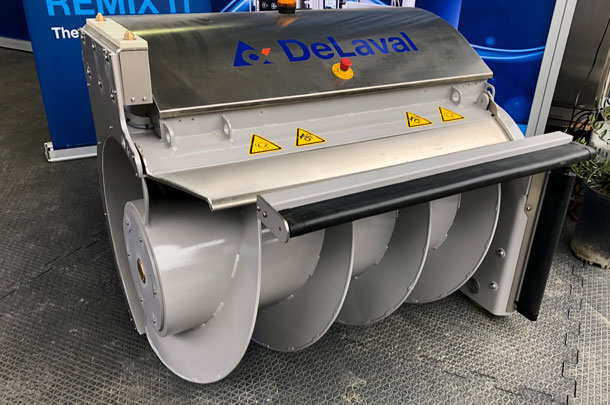 A new automated feed push-up unit was on display from DeLaval. The battery-powered, induction line-following OptiDuo is a slow-moving feed pusher. Different from other barrel pushers, the unit has a slow-moving, counter-clockwise-rotating auger to remix and refresh feed as it pushes it closer to the cows. For safety, the unit has two emergency crash bars – one just in front of the auger and one on the auger’s intake side. If something were to be accidentally picked up by the auger, just a slight amount of consistent pressure against the crash bars would stop the unit.

The unit has an adaptive drive to modulate its speed relative to uneven amounts of feed throughout a bunk, producing a uniform and steady remix. An optional upgrade is a concentrate bin to dispense a feed dressing, which could help entice dry matter intake. 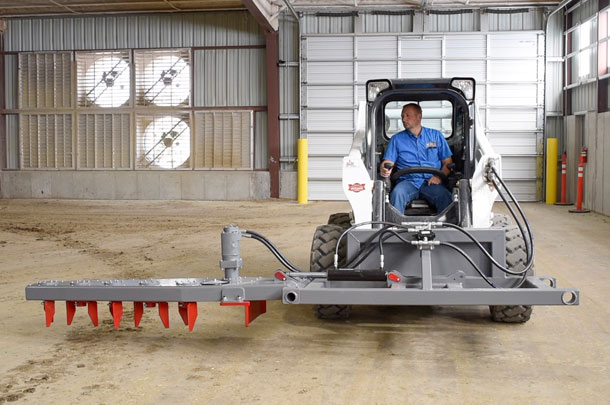 A new implement from Hatfield Manufacturing Inc. (HMI) aims to make bedded freestall maintenance easier. The arm of the attachment slides under stall loops, while its five individually rotating teeth break up packed manure solids, compost or sand in freestall beds. Its teeth chew and stir the bedding to a depth of 8 inches. It can be mounted to a skid steer, three-point hitch or loader. The implement includes a curb guide to aid operators in holding a straight line while driving the unit through a lane of stalls. The skid steer version has built-in steps for an operator to use to access the cab. Hatfield Manufacturing’s sales manager Kade Walker says the first customer to use the implement since it became available this year has been operating it once a week for bedding reconditioning but will likely move to using it every other week. Walker recommends producers continue to also use a top-dressing groomer on a regular basis to optimize stall comfort. 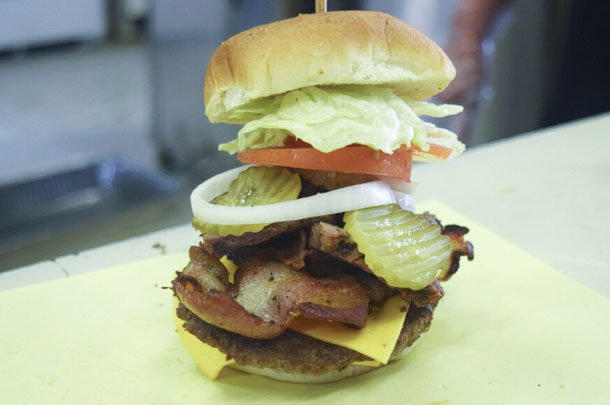 A ‘Trump burger’ is HUUUUGGE

One of the locally sponsored food booths sold a supersized burger bearing President Donald Trump’s name. The “Trump burger” included two quarter-pound patties, two slices of cheese, two slices of bacon and a quarter-pound of tri-tip. Nearly lopsided to begin with, customers could further embellish the entree with all the regular hamburger toppings. With fries and a drink, a meal cost $15. When asked how the burger got its name, concession stand worker Pete Lara Jr. said it was meant to be “fun.”

The burger drew many comments, mostly positive but some negative as well. Lara said the most impressive part of advertising the burger was how passionate Trump supporters are. One customer bought nine of the burgers “just because of the name” and another “tried to give me 20 dollars to donate to his campaign. We had to tell them this is a nonprofit fundraiser, not a political fundraising campaign,” Lara said.

PHOTO 7: The Trump Burger as sold at one concession stand at World Ag Expo. Photo provided by Pete Lara.