Michael T. Harper
Crop rotation is an important part of a resilient and sustainable farming system because it breaks pest cycles, spreads the risk of crop failure and improves nutrient utilization, among other benefits.
Michael T. Harper

Pearl millet is a warm-season annual grass that produces a crop very quickly, uses water very efficiently and has a brown midrib (BMR) variety; therefore, it is a candidate to increase crop diversity. Using new crops (or at least crops new to the farmer) requires learning how to plant, harvest and feed them. As a first step to help nutritionists and dairymen know how BMR pearl millet could be fed to high-producing lactating dairy cows, a feeding trial was undertaken.

We chose a BMR dwarf variety of pearl millet harvested when the flag leaf was visible to achieve high fiber digestibility in the silage. The study was conducted at Penn State with 17 lactating Holstein dairy cows averaging 66 days in milk (plus or minus 20) at the beginning of the experiment.

For 28 days, half of the cows were fed the treatment diet and half were fed the control diet. For the next 28 days, the cows were switched to the opposite diet. The diets, shown in Table 1, contained 60 percent forage and only differed by the inclusion of 10 percent pearl millet silage in the place of corn silage. 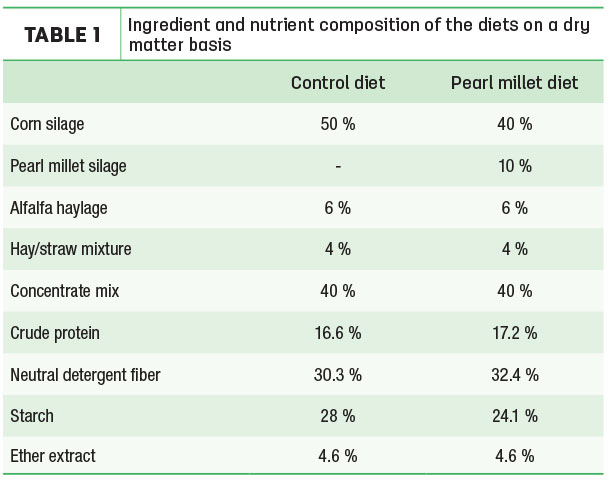 Nutrient levels for the pearl millet diet were higher in crude protein and neutral detergent fiber (NDF) and lower in starch, also seen in Table 1.

What did the cows tell us? Inclusion of the pearl millet silage in the ration did not change dry matter intake or energy-corrected milk yield, which averaged 64 pounds and 103 pounds, respectively. Milk fat concentration tended to increase with the pearl millet silage, 3.71 versus 3.47, but had no effect on milk fat yield. The concentration of milk trans fatty acids was decreased in the pearl millet diet, with a decrease in the trans-10 18:1 fatty acid, which is a marker of a detrimental biohydrogenation pathway in the rumen. Milk protein and lactose were not affected by diet.

The pearl millet silage had a lower concentration of lignin per unit of NDF than corn silage, and ruminal incubations of the silages showed more rapid NDF degradation of the pearl millet fiber (Figure 1). 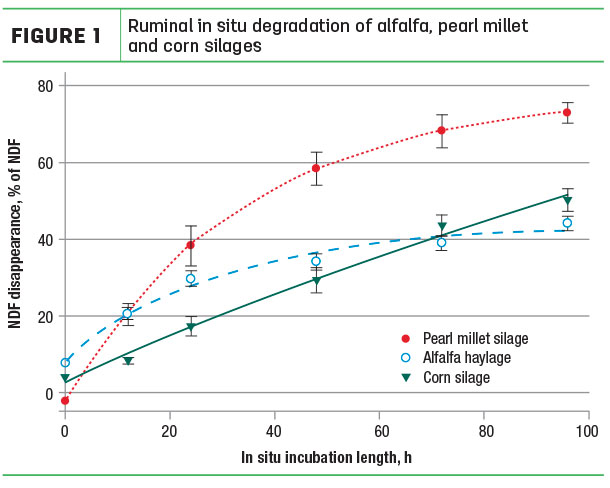 The setup of this experiment, with pearl millet as a simple replacement, was chosen so that changes in production could be directly attributed to the forage change. In a commercial dairy herd, however, when forage nutrients change, the ration is adjusted to maintain nutrient levels (e.g., starch levels).

What are the broader implications of this research? There are several. First, BMR pearl millet can be a viable forage option for high-producing lactating dairy cows. If it makes sense on a farm agronomically (i.e., fits in the overall crop rotation and can yield well), it can easily fit into the ration. It is a great “emergency” forage option for times when the cornfield needs to be replanted for one reason or another, but it is too late in the season. Pearl millet can also be double-cropped easily with small-grain silages.

Second, the 2 percentage point increase in NDF content in the pearl millet diet did not limit intake (at least not more than the control diet). This is because of the more rapid ruminal degradation (and potential passage) of the pearl millet NDF. Forage NDF is relatively slow to digest and pass from the rumen, which can cause rumen fill to limit intake. But there is a wide range of digestibilities and rates of NDF within and among forages. Bookends of NDF digestibility might be vegetative perennial ryegrass and straw with corn silage NDF somewhere in the middle.

Modeling NDF digestibility with time points such as 30 and 120 hours can be helpful, particularly within a forage. However, comparing different forages with this analysis does not assess differences in rates of passage of the forage, which is why research such as the one described is quite useful.

Third, increased NDF digestibility can partially replace starch in the diet. This point is a reminder to everyone to consistently work at harvesting forage properly (e.g., appropriate timing, good packing, etc.).

Dairy cows are extremely versatile animals that can utilize many different forages. The bottom line is that if an alternative forage has a higher NDF digestibility than corn silage, it can be fed to lactating cows with success.

This project was partially funded by the Northeast Sustainable Agriculture Research and Education (SARE) program of the National Institute of Food and Agriculture, USDA. A more detailed explanation of the study can be found in the Journal of Dairy Science 101:5006–5019.