Crude protein (CP) is a required nutrient for dairy cattle and typically ranges from 15 to 18 percent on a dry matter basis. Dietary CP is often the most expensive macronutrient, and there has been considerable interest in reducing the inclusion rate of high-CP ingredients to decrease costs.

In addition, there is greater focus on reducing the environmental impact of the dairy industry, and much of this focus has been on improving nitrogen efficiency in cows by reducing nitrogen excretion and ammonia emissions.

Researchers at Cornell University reported that CP can likely be reduced by 0.5 to 1.5 percent without negatively impacting milk production while significantly improving income over feed costs and reducing ammonia emissions.

These treatments were part of a larger 4-by-4 Latin square design with a 28-day period length to determine the effect of supplemental rumen-protected methionine in normal-CP diets on lactational performance. (The full results of the study will be presented at the 2015 Joint Annual Meeting held in Orlando, Florida, this summer.)

Cows were housed in tiestalls on bedded mattresses to allow for measurement of individual dry matter intake (DMI). Cows averaged 1,568 pounds and 112 days in milk at the beginning of the study and were administered rbST throughout, according to the manufacturer recommendations. Diets consisted of 41 percent corn silage, 10 percent hay crop silage and 49 percent concentrate.

The diets also contained 32.2 percent neutral detergent fiber and 26.7 percent starch. Dietary CP was reduced by replacing canola meal, urea and some soybean meal with soybean hulls. Both diets were balanced to meet metabolizable protein requirements. Based on actual dry matter intake, the predicted supply of metabolizable protein was approximately 3,165 grams per day for the normal-CP diet and 3,100 grams per day for the low-CP diet. 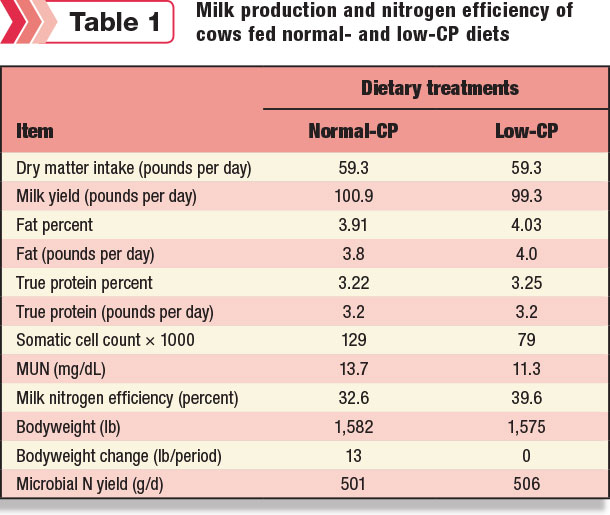 Somatic cell count was unaffected by diet and averaged 129,000 in milk for cows consuming the normal-CP diet and 79,000 for the low-CP, indicating cows were healthy and absent of mastitic infections.

Losses in bodyweight can be masked to some degree because body condition score can be a relatively poor predictor of bodyweight gain, since fat will continue to be deposited if cows are in a positive energy balance, even if tissue protein is catabolized. The relatively short-term nature of this study (28-day periods) may have masked potential decreases in milk production.

However, DMI, milk yield, fat and protein yield, and bodyweight change were similar for cows consuming diets containing 14.6 or 16.2 percent CP. The results from this long-term study support observations in our own study and suggest that lowering dietary CP by 1 to 2 percent shouldn’t result in negative effects on milk production or bodyweight gain.

The most effective tool to monitor excessive or inadequate dietary CP and metabolizable protein supply is bulk tank or test-day MUN concentration. According to Cornell University researchers, optimal range for MUN is 8 to 12 mg per dL. Dietary CP and metabolizable protein is limited when MUN concentrations fall below 8 mg per dL, likely reducing milk production.

Gradually reducing dietary CP is a good strategy for mid- and late-lactation cows, but care should be taken when modulating CP fed to fresh cow groups due to lower expected DMI in this group. Also be sure to monitor milk protein content since it is responsive to lack of metabolizable protein. Bulk tank MUN concentrations only provide herd-level protein status. More detailed information on lactation cow groups will require monitoring test-day MUN concentration.

MUN and milk nitrogen efficiency data suggest cows consuming the low-CP diet wasted less protein while maintaining a high level of milk production. The minimum amount of dietary CP to achieve high milk production will not be the same for all farms.

However, most farms should be able to decrease CP by 1 to 2 percentage units when CP is replaced by fermentable carbohydrates, such as high-quality highly digestible forage or non-forage fiber sources. These modifications should not limit bodyweight gain or microbial protein synthesis.

Bulk tank or test-day MUN concentration is an effective tool to monitor protein status. Low-CP diets can maintain high milk production and improve nitrogen efficiency and income over feed costs as long as the diets supply adequate amounts of metabolizable protein, and methionine and lysine in metabolizable protein. PD