Genome has good indicator for fertility

Research from the University of Guelph has found an association between genomic daughter pregnancy rates and reproductive parameters in Holstein dairy cattle.

Infertility of lactating dairy cows represents a major challenge for dairy production. Reduced reproductive performance has been associated with declines in economic returns due to reduced milk yield per cow per day, lower production of replacement heifers and increased culling.

Historically, high milk production has been associated with decreased fertility in lactating dairy cows. The decrease in fertility could be due to genetic factors as other characteristics (e.g., milk production and conformation traits) were prioritized over fertility in the selection for dairy cattle. Increased individual milk production has been achieved in part due to improvements in management as well as intensive genetic selection. This increase in milk production has also been shown to be associated with reduced reproductive performance, which became a major concern of farmers and the dairy industry. However, the interpretation made from observed associations between greater milk yield and poor reproductive performance may require critical evaluation, as it has been shown to be a complex relationship. Additionally, inappropriate management practices of high-producing dairy cows may be a significant contributor to the inability of dairy cows to conceive and maintain pregnancy, regardless of milk yield.

Genomic daughter pregnancy rate (GDPR) is calculated using the risk of pregnancy of a bull’s daughters and predicts the genetic improvement in pregnancy rates for a future daughter of a bull. Better pregnancy rates are associated with increased profitability of a herd and reduced days open. An increase of one point in GDPR results in reduction of four days open. The improvement of genomic prediction for GDPR gives the opportunity to use the GDPR as selection criteria to improve fertility of lactating dairy cows. It was reported that using the GDPR in reproductive programs reversed the phenotypic decline in fertility in dairy cows.

In addition to conception risk (or pregnancy per A.I.), embryonic mortality can be considered as reproduction performance indicator. Indeed, late embryo loss causes economic losses due to delays in the establishment of pregnancy. As multiple reports have demonstrated embryonic mortality during the first third of gestation (3.2% to 42.7%), it is an important component of dairy cow reproduction and assessing its association with an indicator such as GDPR would be interesting.

A study conducted on two large herds in Brazil between 2018-2020 titled “Association between genomic daughter pregnancy rates and reproductive parameters in Holstein dairy cattle” was recently published in the Journal of Dairy Science. This study assessed the relationship between GDPR and pregnancy at first insemination, overall pregnancy per A.I., pregnancy losses and estrus behavior. A total of 12,949 events from 3,499 Holstein cows were included, from a single herd. Hair samples were collected, for genetic analysis, from the tail switch of every animal, with most samples being taken at approximately 2 months old. 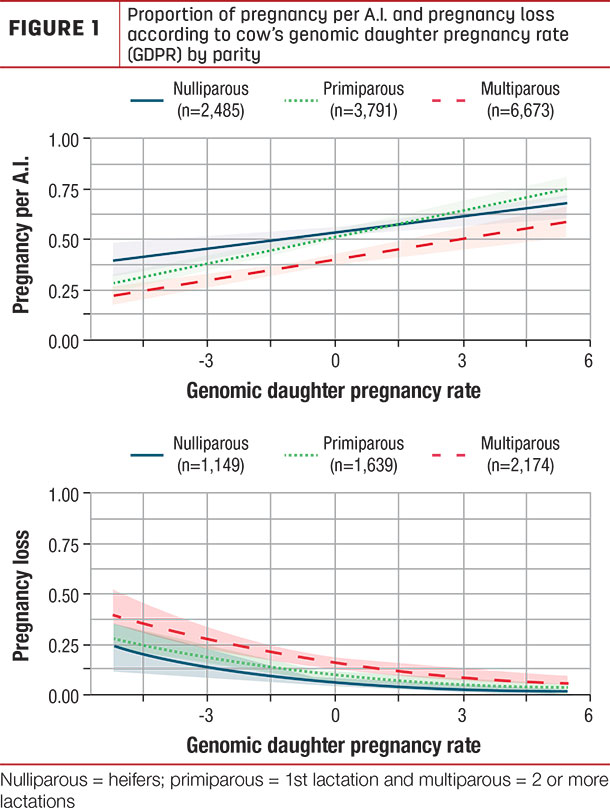 Interestingly, cows with higher GDPR were more likely to demonstrate estrus on the day of timed A.I. than cows with lower GDPR. Furthermore, cows that were inseminated following an estrus event (i.e., observed in heat either using tail chalk or an automated activity monitor) were more likely to become pregnant, both at first insemination postpartum and subsequent inseminations, and had decreased pregnancy loss than cows with lower GDPR (Figure 2). 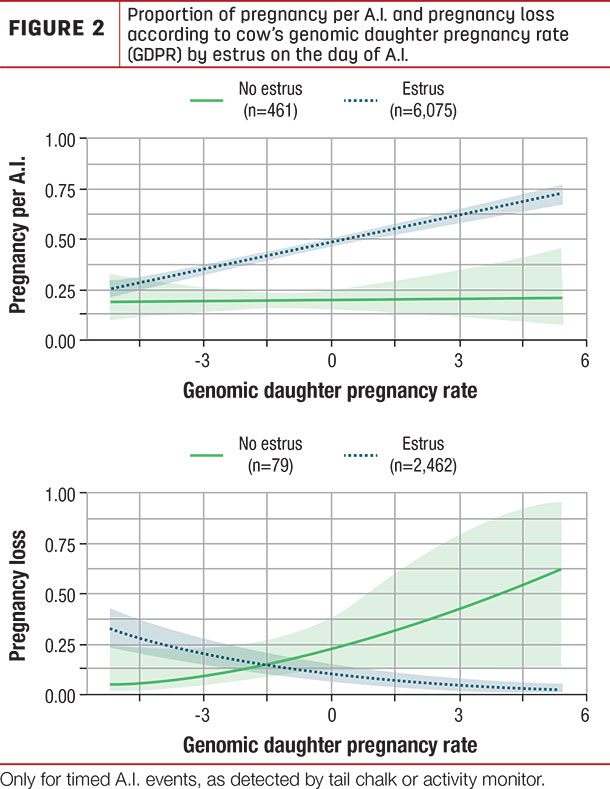 The association of GDPR and fertility was unchanged regardless of the breeding strategy used (i.e., receiving embryo transfer, or beef, sexed or conventional semen; Figure 3). 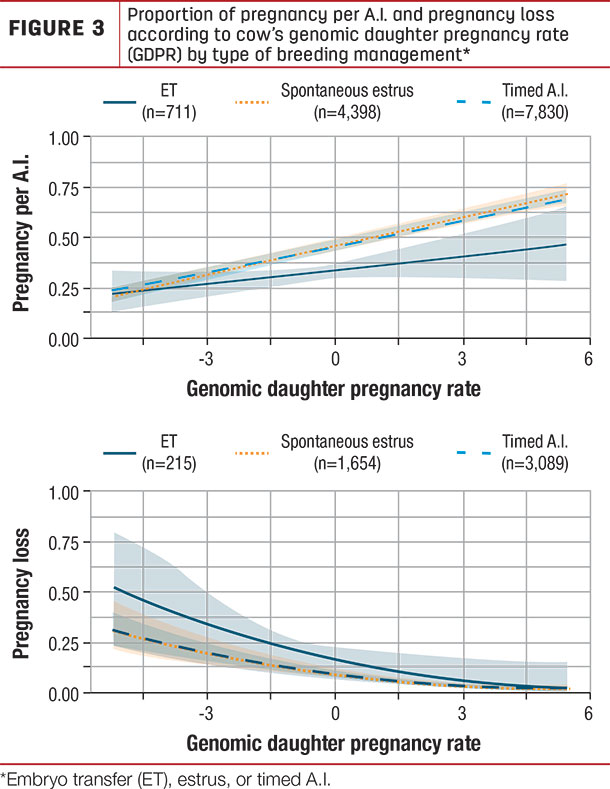 The association between GDPR and reproduction outcomes suggests it is possible that selecting for higher GDPR can result in better reproduction performance in a herd. This is one of the first studies that has been able to demonstrate and confirm this genetic marker for fertility indeed results in greater conception risk, lower pregnancy loss as well as better expression of estrus.