Audrey Schmitz
Change is hard for anybody, and when things have been done a certain way for so long, they tend to continue to be done that way.
Audrey Schmitz

However, when Kinnard Dairy in Casco, Wisconsin, started seeing serious issues with mastitis post-dry-off, they knew something needed to change.

“We would dry off healthy cows [that] were doing well, and then we were seeing a couple of days after, maybe even a week at max – mastitis,” says herd team leader and vet technician Carissa Koeppel. “We noticed when we were walking the pens, we’d see swollen quarters – and sure enough, when we went to check them, they had mastitis. In some cases, they were going toxic right away and we had cows dying on us. When that started happening, we knew we had a problem.”

Koeppel decided to reach out to both their herd health vet and Merck Animal Health rep Jessica Lundgren.

“Jessica is always saying, ‘How can I help you? What can I do?’ So at the time, I said, ‘Well, this is the problems we’re having. We’d love some help.’ And she said, ‘Well, this is great. I have this dry cow checklist. Let’s look at it and see what we can change,’” says Koeppel.

After hearing about the issue Lundgren notified the farm manager, worked with the herd veterinarian and received permission from the farm to set up a time to come in and observe the herd team’s normal routine. Kinnard Dairy milks 8,000 Holstein cows in a 100-cow rotary parlor. On dry-off day that occurs once a week, the herd team dries off approximately 80 to 120 cows. 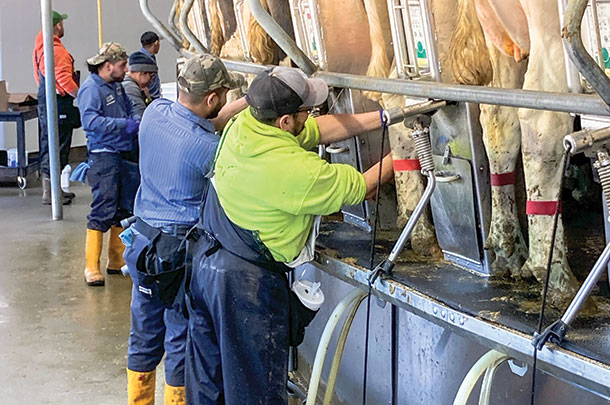 “Jessica stood back and watched us and didn’t correct us because she wanted to see what we were doing,” Koeppel says. “She filled out her sheet, and then afterward we sat down and went through the checklist step-by-step.”

Koeppel found that their efforts to make the process smoother and shorten the amount of time the cows were in parlor were detrimental. All the dry cow treatment tubes were being laid out next to each cow’s feet on the rotary parlor deck, where there was water and likely manure.

“We also found that the wipes we had been using and thought were good wipes to clean the teat ends with didn’t have enough alcohol in them,” Koeppel says. “And then when you’re wiping the teat ends, you’re supposed to hold the quarter with one hand and use the other hand to wipe the teat. We weren’t doing that or using two hands.”

After going through the checklist, Koeppel decided to fix the problems right away.

“Immediately, the next week, we were not allowing anything to be set on the deck by the cows’ feet, whether it was dry-off tubes, alcohol wipes or the post-dip. We were not allowing anything because we couldn’t guarantee that it was a clean surface,” Koeppel says. “Everybody also had to wear a clean bib or apron around their waist to hold the dry cow treatment and wipes, or we had a cart to pull behind if they didn’t want to wear a bib.”

Next, Koeppel reached out to their farm supply company and asked for wipes with a 70% alcohol content, and also started requiring the cleaning of the teat end to be a two-handed process.

“Truthfully, we didn’t know we weren’t using the correct wipes. We thought they were perfectly good wipes,” Koeppel says. “So everything they found, we corrected.”

Following implementation of the clean bibs and correct wipes, they saw great results.

“After, I could just visually see that our area and supplies were so much cleaner,” Koeppel says. “I think it really helped knowing we needed to have more focus on cleanliness, and it felt great knowing the cows were doing better and we were doing better as a team as well.”

Brian Miller, a veterinarian with Merck Animal Health, co-wrote the dry cow checklist with Lundgren to work together with herd health veterinarians and producers to look for areas of opportunity to improve dry-off practices that could negatively affect milk quality and cow health.

“You’d be amazed at what you see when you do a number of these audits, and I’ve watched it my whole life,” Miller says. “People put tubes in their mouth, on the platform in poop, dirty pails, dirty aprons, they don’t clean the teats properly, they cross-contaminate with their hands, you name it.”

Miller says the dry-off checklist was also designed to educate producers and employees.

“Many times, the employees are never told the reason why they do something, and that’s criminal,” Miller says. “They need to know the importance and the why because if they don’t know the why, what reason do they have to do it better, right? They just want to get it done and move to the next thing. But if you explain the reason why it’s important, they typically do a better job.”

After the checklist was created Lundgren took it and ran with it, and has been doing dry cow audits throughout her region.

“It’s kind of caught on with other reps [who] want to do a similar thing to bring something of value,” Miller says. “Not every rep will take the bull by the horns, so to speak, and go out and implement it. What she has quickly done is earned the trust and respect of the customers in her area, including the veterinarians, because she’s done a very, very good job with this.”

When asked what the most challenging part of the dry cow audit was, Koeppel says it was implementing the changes.

“Unfortunately, nobody likes change. To make big changes after you’ve been doing things a certain way for so long, that’s difficult,” Koeppel says. “So I think having the conversation and making sure everyone was following through on the procedure, that was the most challenging part.”

For producers who are also experiencing similar problems or looking to complete the dry cow checklist, Koeppel says they should 100% do it.