Facility design as a cooling strategy

Simply put, reducing solar radiation should be the first and easiest heat abatement strategy to implement. Barn-housed cattle accomplish this with the use of a roof, but due to the sun rising and setting, it is recommended to orientate barns in east-west orientation. If a barn has outside stalls or is orientated north-south, the use of shade cloth may be advised to reduce solar radiation. As for open lot facilities, using shade structures (metal or cloth) is highly recommended. Dairies that provide shade in the lot (lot and/or over the feedbunk) produced 14 more pounds of milk per cow per day than open lots without any shade.

The second-most-used heat abatement technique relies on water and fans for evaporative cooling, either to cool the cow’s environment or to increase the rate of evaporation from the cow’s skin by applying water. Based on human research, it has been estimated the amount of heat dissipated from a body submerged in water is nearly 26 times greater than when the body is exposed to a similar air temperature. In dairy cows, the use of increased wetting frequency and supplemental air flow has been estimated to increase heat dissipated two- to eightfold. It has been estimated that a high-producing dairy cow can generate 6,000 BTUs of heat per hour. This highlights the importance of the use of water to facilitate cow cooling and comfort. 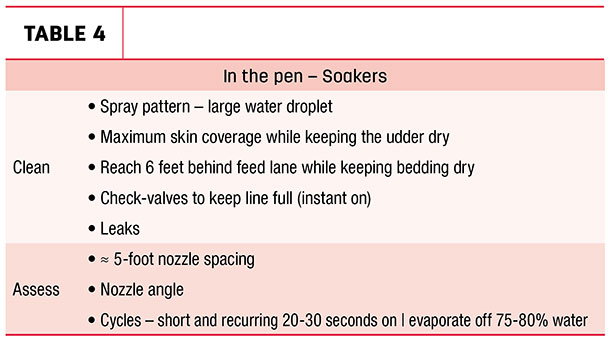 Due to energy costs and water scarcity, conductive cooling has been evaluated by some researchers. Cow cooling through using heat exchangers buried below the bedding surface, as well as cooled waterbeds, have been studied. Bedding choices can help promote cow cooling but have limited ability to cool due to less than 20% of the cow’s body being in contact with the stall base. Alternatively, the type of bedding can help promote cooling. For example, sand bedding is more effective at cooling than dried manure and shavings. While it may not be realistic to replace your current stall base to promote cow cooling, potentially targeting the use of sand during the warmer months may be an option. 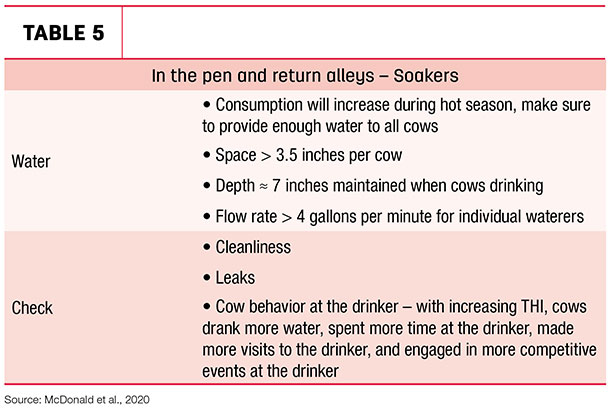 The holding area is arguably the hottest place in a facility for a cow. If water availability is a limiting factor, this would not be the area to skimp. Even on dairies that provide additional space and proper cooling (fans and soakers) to cows in the holding area, only a marginal difference is made in lowering core body temperatures (less than 0.2ºF per hour). Dairies with less-than-ideal holding pen cooling may observe increased heat load in their cows. In the holding area, it is recommended to have air flow at cow level at 5 mph. This may require angling fans down to approximately 45 degrees to promote air flow between the cows. Soakers should be mounted to allow for an overlapped spray pattern with large water droplets.

Herd managers should reduce the amount of time a cow spends in the holding area or in transit to or from the parlor, where heat abatement may not be ideal. When there are large holding areas, cows are often brought up to the parlor upward to an hour earlier than their actual milking time, increasing their time away from the pen. Time away from the pen is recommended to be under 3.5 hours per day; 55% of pens assessed exceeded 3.5 hours per day.

Overstocking can increase the heat load of the pen and reduce the effectiveness of fans reaching all cows in the pen. Midwest, Northeast, Southeast and Pacific Northwest high-production pens average just over 110% of stall stocking density regardless of rows in the pen.

Water intake can increase upward of 21% during times of heat stress due to increased need for evaporative cooling. Dairies in all regions of the U.S. had pen water space under 3.5 linear inches per cow, and only 26% of pens assessed provided the recommended linear water space in the pen. Waterers need to be cleaned frequently (two or three times per week) to provide clean water and encourage intake.

Finally, one of the most effective ways to improve heat abatement is by maintaining and cleaning equipment. Fans in the barns are often covered in a layer of dust, have loose belts or are not functioning altogether. Simply removing the layer of dirt on fans can improve fan efficiency up to 50%. Soakers missing nozzles reduce pressure on the line for the remaining soaker heads.

In certain regions of the U.S., heat stress has already been occurring. Taking steps now to check if equipment is working properly and fans are cleaned and at the correct angles will improve heat abatement in your cows.