Is there an optimal amount of muscle reserves for transition cows?

Conor McCabe
The transition period is marked by low dry matter intake (DMI) that is inadequate to meet energy and amino acid requirements for the fetus and milk production post-calving.
Conor McCabe

Conor McCabe is a Ph.D. student at the University of California – Davis studying dairy cattle sus...

When cattle experience this negative nutrient balance, they utilize their body tissue reserves to overcome this deficit. Dairy cows use approximately 40% and 20% of their fat and muscle reserves from calving through the first two months in lactation. However, there remains a large amount of variability between cows in the amount of tissue consumed based on a variety of factors, including genetics, management and the amount of tissue present. While most research has been focused on fat, there is a renewed focus on the role of muscle tissue through this period.

Cow body condition scoring (1-to- 5 scale) allows for visual assessment of body fat reserves. In general, cows with greater fat reserves utilize more tissue for lactation needs. Too great of fat reserves at calving leads to the cow metabolizing large amounts of fat in early lactation and the development of metabolic diseases (i.e., ketosis and fatty liver), reduced feed intake and reduced milk yield. However, insufficient fat reserves at calving don’t give the cow an energy source to use in early lactation. Therefore, somewhere between these extremes has been termed the ideal fat reserves for dairy cows at calving to maximize the combination of milk production, animal health and feed intake.

Unlike fat, muscle plays a different role in the body, as it is less energy-dense, plays a structural tissue role and can provide amino acids as well. From our work, we observed muscle tissue being used before calving until approximately three to four weeks in lactation. Amino acids from muscle have both prepartum and postpartum applications for the developing fetus and milk production, respectively.

These amino acids can be applied to the metabolism modifications cows undergo in the transition from the dry period to lactation. These alterations, such as increased liver size, increased digestive tract and mammary gland modifications, allow cows to achieve high levels of milk production. Fat tissue utilization for negative energy balance (NEB) has been thought to begin at the time of calving and carry out through at least five weeks in lactation to help provide a source of energy for lactation needs. Thus, muscle tissue may be seen as an energy and amino acid fuel source to start the transition to lactation, and fat serves as bridging the gap until cows have sufficient nutrient intake from feed.

There are multiple ways to assess a cow’s muscle reserves, but the simplest way is using ultrasound images. One of the most common locations for ultrasound is between the 12th and 13th rib (Figure 3a). 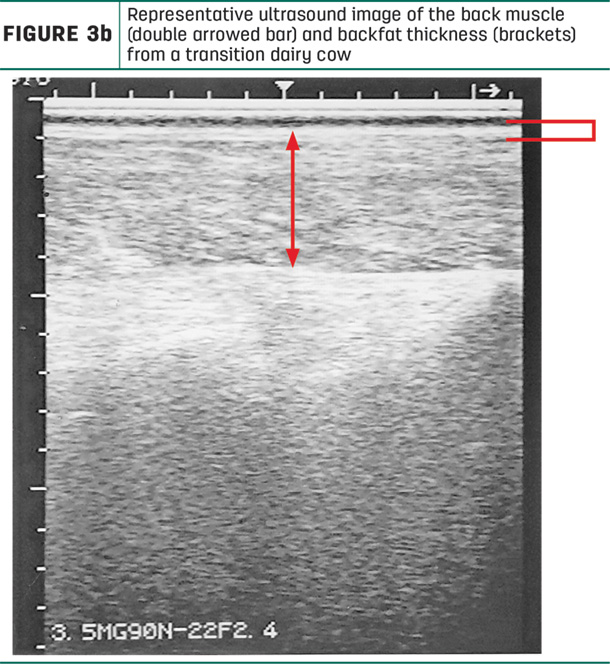 Similarly, cows with greater backfat thickness tend to have greater total body fat. Our research focused on tracking changes in these reserves from one month prior to calving through the first two months of lactation in cows with either high or low muscle reserves.

Cows that had greater muscle reserves in late gestation gained additional fat through the dry period. On the contrary, those cows that had less muscle gained more muscle tissue (Figure 1). 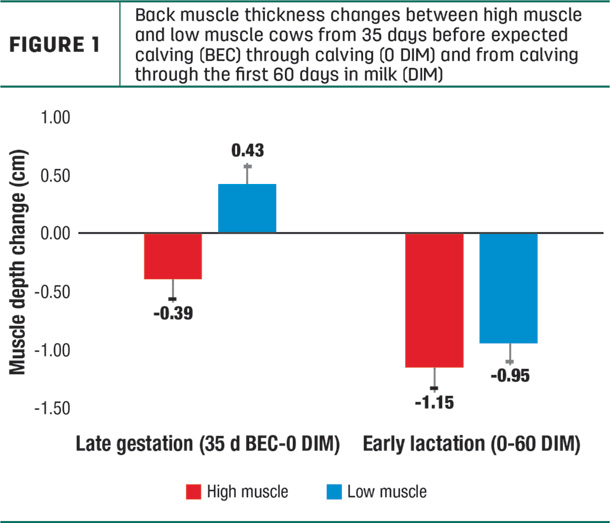 Once animals calved, cows with more muscle used more muscle, and cows with more fat used more fat. The high-muscle cows used more of both reserves (muscle and fat) throughout the studies. Given this observation, there may be a relationship between the quantity of these two body reserves used in dairy cows over the transition period.

Outside of tissue reserve changes, cows with greater muscle reserves gave birth to larger calves. On top of this, they also produced 5 pounds of milk less per day (Figure 2). 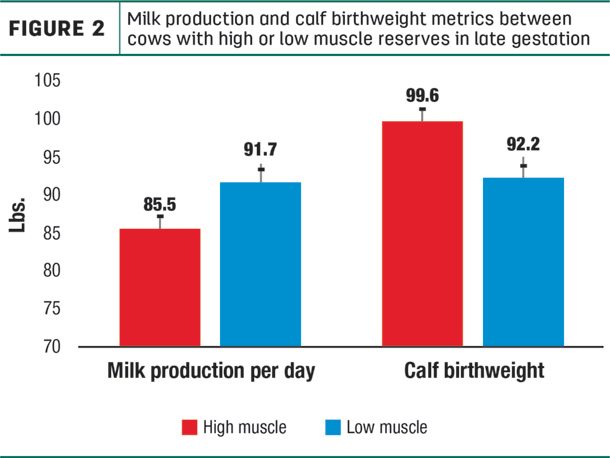 Thereby, the amount of muscle reserves a cow has can influence the nutrient flows from the dry period through early lactation.

Can we manage muscle reserves?

Given the observed production implications from our study, this provokes further research into modifying muscle reserves in dry cows. Previous research in body condition scores and fat mobilization has shown that genetics and management system as well as diet can influence tissue reserves throughout lactation.

Recent work has investigated the link between dietary protein amino acid profile and changes in protein reserves in the first four weeks of lactation. Multiparous cows fed a diet deficient in metabolizable protein (MP) suffered a greater loss of body muscle and increased stress and inflammation compared to a group fed an adequate level of rumen bypass or byproduct protein sources. When looking at diets of the same protein concentration but inadequate or adequate amino acid profiles, there were no differences in muscle reserve changes. Therefore, if transition cows have sufficient MP, they should not overly utilize their muscle reserves.

However, this begs the question about providing cows in early lactation surplus protein to minimize the use of these reserves. Certain studies have used an amino acid profile infusion of casein (milk protein) to look at this scenario. Instead of using this protein for themselves through increasing muscle mass, the extra amino acids resulted in an increase in milk production and milk protein output. Therefore, increasing early lactation supply of amino acids may result in them being used for milk production over being synthesized into body reserves. Given what we know about dietary protein supply and cattle tissue reserves, current recommendations remain to provide adequate protein levels and attempt to maximize DMI in early lactation for health and production performance.

Conor McCabe is a Ph.D. student at the University of California – Davis. This article is based on research performed during his master’s degree at Purdue University.