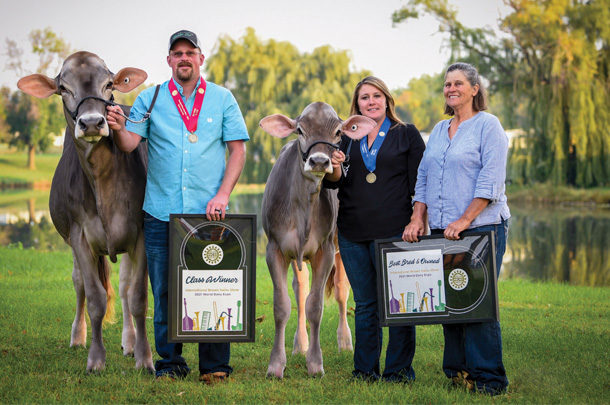 Katie Coyne
As we look to a new year, whether you are just beginning a show season or just ending one, it’s a great time to look ahead to 2022 and what you would like to achieve.
Katie Coyne

For younger showmen, it may be simply to learn some show techniques and get better at working with your clippers. At the other end of that scenario are those who are looking at the last years of their junior careers in the show ring and staring at their future in the fast-paced world of exhibiting cattle at another level. We suggest finding a mentor or two, setting some goals and seeking success. Don’t get discouraged if it takes a few years; as Billie Jo Rhodes of Jennings Gap Dairy LLC says: “Always believe in yourself.”

For as long as she can remember, Billie Jo has loved the show ring. Her grandfather, Bill Hughes, was her first mentor and her biggest supporter. He taught her the basics of washing, clipping, leading, how to pick a good one, how to win with gratitude and how to learn from a loss. Bill was also a teacher to many dairy youth in North Carolina and Virginia throughout his colorful life. He was a fan of the Brown Swiss breed and passed that love on to Billie Jo. Billie Jo’s mother and Bill’s daughter, Betty Ann, is also a longtime 4-H leader, an active and key owner at the farm and extremely proud of all her daughter has accomplished in recent years with her dairy cattle. In addition to the dairy, Billie Jo’s father, Dwight, is an award-winning, large-scale poultry producer. As in most families, Billie Jo’s parents and grandparents were her first mentors.

In 2017, Cindy Warner, an outstanding Brown Swiss breeder from Maryland, collected oocytes from her award-winning Wanda cow. After a very successful IVF session, Cindy had embryos to sell, and Billie Jo purchased some. Unfortunately, the tank of embryos never made it to Billie Jo. Cindy, always known for her generosity, sent another batch of embryos to Billie Jo so she could follow her goal of upgrading her Brown Swiss herd. Enter mentor number four, Cindy Warner.

Wanting to add a top-of-the-class Holstein heifer to her herd, she sought the advice of Kelly Reynolds of Reyncrest Farm in western New York. Reyncrest had been producing winning heifers, and Billie Jo set her sights on one. She and Kelly became quick friends over conversations about what to feed and how much, daily routines and more. The calf Billie Jo selected sold in the March Madness sale, managed by Chris and Jen Hill. Chris and Jen enjoy show ring success at all levels, and Billie Jo had been their night-line person at World Dairy Expo. This opportunity led to a strong friendship and business association as they helped Billie Jo source and purchase several key members of her current herd. They continue to work together, but in 2021, Billie Jo wasn’t the night-line person but the breeder and owner of the first-place winter calf, tied in Chris and Jen’s string. Kelly, Chris and Jen add to the list of people who have been key to the success in the show ring for Jennings Gap.

At the home farm, Jennings Gap, Billie Jo has converted an old horse barn at the farm to a show barn. This barn houses a dozen or so heifers and allows her to separate the special heifers and feed them individually and according to their needs. Billie Jo is also responsible for feeding calves and makes all of the mating decisions at the farm, roles she has had since returning to the farm in 2015. Her husband, Blake, is a key partner in her success as he works on both his home farm and Billie Jo’s family farm.

This past October, Billie Jo nervously entered the show ring of purple shavings on the most elite stage of dairy cattle shows, the World Dairy Expo. She was leading her bred-and-owned entry of Jennings Gap WF Harmonie, a winter calf. As the class progressed, she found herself pulled in first out of a huge class of calves, and first is where she stayed. A dream became reality. This story began a few years ago when Harmonie’s dam was a calf and Billie Jo’s grandfather, Bill Hughes, stated she was a winner.

The story continues with feeding tips and friendly advice taken and applied from friends in the industry. The goal was achieved by the hard work and determination of a young woman who didn’t stop believing in herself. Not only did she win the winter calf class but placed second in the spring yearling class with Round-Hill Cadence Wave, bred by her mentor, Cindy Warner.

As a new year approaches, find a mentor or two, set some goals and seek your success, and “always believe in yourself.”

PHOTO 1: Mentorships have been a success factor for Billie Jo Rhodes (center). She is pictured here with her husband, Blake (left), and mother, Betty Ann Swope. Photo by Andrew Hetke Photography.