As a mother to two young boys, I struggled with postpartum depression – and as a wife, I watched my husband, Matt, struggle with anxiety as a farmer. Our efforts to manage stress, overcome our mental health challenges and help others led me into co-founding The Do More Agriculture Foundation, a Canadian not-for-profit organization focusing on mental health in agriculture.

Our farm was hit hard financially over a couple of years of excess moisture. We lost hundreds of acres and Matt built two side businesses to help ease the financial load. Increased stress started to take a toll on Matt, and I came home one day from work as he was having a panic attack in the living room. I didn’t know what to do other than hold him tightly to get him to focus on my breathing, and it was at that moment I knew we had to do something differently for our family and farm.

This was our turning point. We knew we needed to address our struggles but also help others who were facing similar situations. Matt and I decided to share our story in a live online video in the hopes that it would help someone else in agriculture. But before we shared our experiences, we talked through some potential outcomes. We often hear about the stigma surrounding mental health, but once Matt and I started to talk about the risks of doing a live video, we realized how the stigma surrounding mental health in agriculture is different. Not only could the stigma impact how others treated us and our family, but also our farm. Would the bank take away our operating loan? Would insurance see us as a higher risk? Would people go to our landlords and tell them we were crazy and our rented land be gone?

But after we aired the video, the opposite happened. We received an outpouring of support from countless farmers who have faced similar struggles. This video played a role in co-founding Do More Ag in 2018 with the goal of championing the mental well-being for farmers.

Since its inception, Do More Ag has received immense support from all levels within agriculture across Canada to help us achieve our objectives and continue to grow.

Some of the services Do More Ag offers:

1. Mental health training sessions, including our very own, agriculture-specific Talk, Ask, Listen workshop at zero cost for those within agriculture.

3. Ongoing and crisis support – We know that farmers lack access to agriculture-specific mental health support. This past winter, many British Columbia farmers and their families were affected by catastrophic flooding. Do More Ag partnered with TELUS Health MyCare to bring counseling at no cost to all British Columbia farmers and their families, and to those who provide support/services to farmers, growers and ranchers. We hope to expand this type of service across the country in the future.

We’ve come a long way in only four years, both as an organization and as an industry. Mental health has become a priority and we are slowly breaking the silence, barriers and stigma. I am encouraged to know that if my boys farm in the future, they will be encouraged and supported to talk openly about their struggles and have resources available to them. Mental health resources, services, support and information can be found at domore.ag 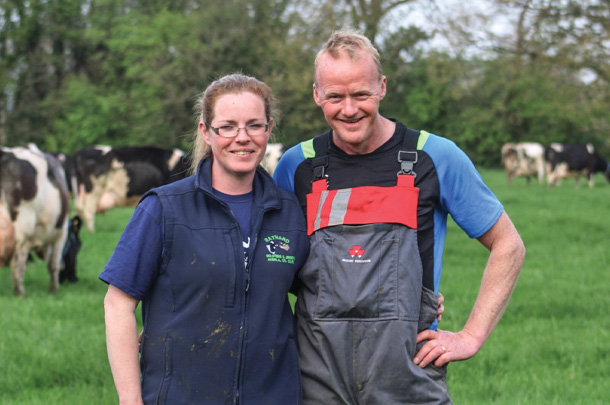 Pete and Paula Hynes are a couple who are passionate about mental health awareness, which stems from personal experience as Pete previously struggled with depression. Together, they farm in southwest Ireland with a herd of 180 spring-calving pedigree Holsteins.

In 2018, they became ambassadors for the Tackle Your Feelings mental well-being campaign – and while spreading the message about the importance of mental well-being, they were both acutely aware of the struggles of farmers across the world and the constant challenges the agricultural sector faces. Tragically, more farmers are lost to suicide than farm accidents in Ireland, a statistic that is similar in so many other countries. With that stark reality, they set upon themselves the task of setting up Ag Mental Health Week in 2020, a global mental health awareness campaign aimed at trying to break down the stigma around suicide and mental health while also promoting mental well-being in the farming community. The week runs from Oct. 10-16 and with two years passed, the campaign has big plans for 2022.

Given the global nature of the campaign, it spearheads the week online with livestreamed interviews on Facebook and they have had guests from 11 different countries ranging from doctors, veterinary surgeons to politicians and young farmers, all of whom openly discussed the challenges, personal struggles and also solutions as to how we can keep ourselves in a better frame of mind. 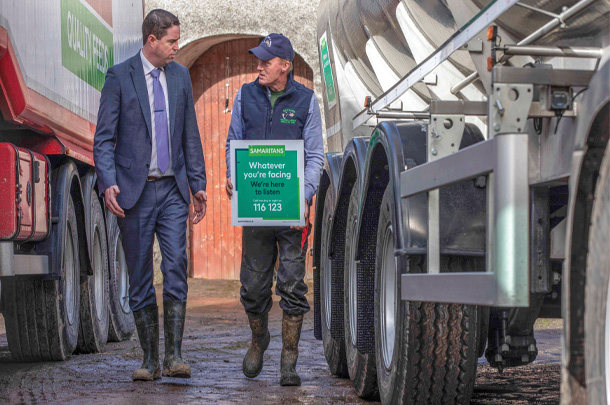 Ag Mental Health Week has received tremendous backup support from companies such as Alltech and Zurich Insurance, and the addition of Mile For Mental well-being to the 2021 week mobilized thousands across the world to run or walk 1 mile to highlight the importance of taking a break and getting out for some exercise; schools and colleges joined in with their students.

To succeed in promoting mental health awareness, it is vital to empower others, and that is something Ag Mental Health Week strives for, linking up with companies who have since trained staff on mental health first aid; it has also helped many more to fundraise during the October week in order to support their local support services in different parts of the world. In October 2021, they began a conversation with the Irish dairy industry and the Samaritans, which is an Irish and UK-based support service; the goal for Ag Mental Health Week was to get the crisis support number on milk tankers.

The Irish dairy industry certainly rose to the challenge as 14 dairy processors came together, placing the crisis number 116 123 on 500 of their milk tankers and feed trucks in March 2022, an initiative that was launched by Minister for Agriculture Martin Heydon on the Hynes dairy farm. It is a message that will be spread across Ireland, covering over 50 million miles a year, but it highlights what can be achieved with a united message – which only began with a conversation at the Hynes’ kitchen table a little over two years ago.

Pete always believed Ag Mental Health Week was worth running even if it only saved one life; through private conversations, Pete knows the campaign has indeed saved lives, encouraged people to go and seek support and, further than that, also shown that with so many coming together with a common message that no one should ever feel alone; the united voice gets louder.

Ag Mental Health Week will run from Oct. 10-16, 2022, further details of which can be found on their social media platforms on Facebook, Instagram and Twitter later in the year.

PHOTO 1: Lesley Kelly, along with her husband, Matt, and two sons, have been instrumental in founding the Do More Agriculture Foundation.

PHOTO 2: Pete and Paula Hynes are dedicated to spreading awareness for Ag Mental Health Week, which will run from Oct. 10-16, 2022.