A replicated complete block design study was implemented at the Kearney Research and Extension Center (KARE) in Parlier, California, testing three treatments (three days of flooding followed by four days without flooding, four days of flooding followed by 10 days without flooding, control) for a duration of six weeks in spring 2019 and spring/summer 2020. A total of 5.4 and 11.9 acre-feet per acre (2019) and 4.9 and 8.1 acre-feet per acre (2020) were applied in the four-on-10 and three-on-four flood treatments, respectively.

The spring 2019 experiment did now show significant differences in yield in the first and second cutting but in feed quality (most notably in crude protein and neutral detergent fiber content, which were of fair quality). In contrast, the 2020 experiment, which was conducted much later in the year (April to mid-May), again resulted in no significant differences in alfalfa yield but extremely poor feed quality (Utility grade). Together, these results indicate that while caution is appropriate to prevent deterioration in feed quality, winter recharge in alfalfa fields with highly permeable soils appears to be a viable practice that has no effect on total alfalfa yield.

Winter groundwater recharge, where farmland is flooded during the winter using surface water to recharge the underlying groundwater, could potentially provide a wide range of opportunities for long-term water security given the large irrigated acreage and water distribution infrastructure available in California. Among the perennial cropping systems planted in California’s Central Valley, alfalfa is one of the most promising ones because it seldom receives nitrogen fertilizer, which reduces the risk of leaching excess nitrate to groundwater, one of the main concerns when using farmland for groundwater recharge. However, challenges and concerns remain regarding the effect winter groundwater recharge could have on alfalfa yield and crop health.

One of the main concerns when flooding alfalfa is the risk of crop injury, yield reduction or stand loss under saturated conditions. Excessive anaerobic conditions could damage roots, increase the risk of root diseases, could cause excess aboveground humidity affecting insects or diseases, excessively high water tables, nutrient and herbicide leaching, and inability to perform field operations due to wet conditions. In addition, in the southern Central Valley where demand for groundwater recharge is greatest, excess surface water for groundwater recharge becomes available late in the rainy season (e.g., March to May) because water originates from snowmelt from the Sierra Nevada Mountains, which might not align with the growing cycle of semi-dormant alfalfa varieties that enter an active growing stage in February. To evaluate the suitability of semi-dormant alfalfa for groundwater recharge, we conducted replicated on-farm experiments on a mature Ameristand 835NT RR alfalfa stands with a fall dormancy rating of 8 on a Hanford fine silty loam to assess crop response to different excess winter water application rates and timings.

We implemented three treatments: four days of flooding and 10 days off (four-on-10), three days of flooding and four days off (three-on-four) and control in a randomized complete plot design with three replicates on nine 20-by-44-square-foot plots. Treatments were applied for a total of six weeks between Feb. 11 and March 24, 2019, and between April 6 and May 17, 2020, respectively.

For the low (four-on-10) and high (three-on-four) frequency treatment, a total of 5.4 acre-feet per acre and 11.9 acre-feet per acre of water were applied in addition to 2.32 inches of precipitation during 2019. In 2020, a total of 4.9 and 8.1 acre-feet per acre in addition to 0.56 inch of rainfall were applied on the low-frequency and high-frequency treatment, respectively. Treatments were instrumented with volumetric moisture sensors, electrical conductivity and soil temperature sensors (Meter TEROS 12), oxygen sensors (Figaro KE-25) and redox sensors (built-in hose), which were installed at 2, 20 and 40 inches measuring at 10-minute intervals. Plots were harvested with a small, flail-type harvester and subsamples were collected for biomass, yield and feed quality analysis.

One can see that during water application, soil water content quickly increased to field capacity, indicating saturated conditions. Oxygen measurements during 2019 and 2020 indicate that available oxygen in the soil pore space gradually decreased over the course of the experiment, reaching nearly anoxic conditions (0% to 2%) during the last two weeks. Alfalfa yield of the first and second cutting of the growing season in 2019 and 2020 did not show significant differences between treatments. Yields in 2019 varied between 3,150 and 3,284 pounds per acre for the first and 3,393 to 3,762 pounds per acre (12% moisture content alfalfa) for the second cutting (Figure 1 a and b). 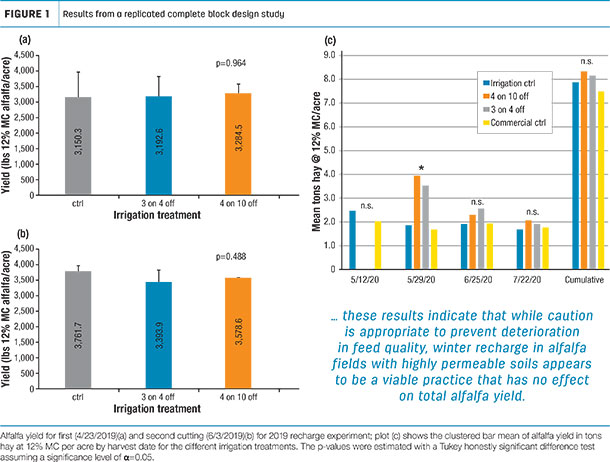 In 2020, yield was measured during the first four cuttings of the season.

Because of the late onset of the groundwater recharge experiment in 2020, the alfalfa in the flood treatments could not be harvested at the time of the first cutting (May 12, 2020), leading to double the yield in the second cutting (first cutting in the flood treatments) on May 29, 2020 (Figure 1 c). For the third and fourth cutting, no statistical difference in yield could be observed between treatments and neither for the cumulative yield over the first four cuttings, indicating the flooding for groundwater recharge did not have a negative effect on biomass production (Figure 1 c).

Alfalfa forage quality was assessed both in 2019 and 2020. Subsamples of the collected biomass from all harvests were sent to Rock River Laboratory for feed quality analysis. The forage quality test results showed a significant difference in crude protein (CP) content and total insoluble fiber content (aNDF) but not in the least digestible fiber content (ADF) between the control and flood treatments in 2019, indicating the flooding for groundwater recharge has an effect on forage quality.

CP content varied between 20.17% and 21.56% (P value = 0.036), and aNDF varied between 39.75% and 40.72% between the flood treatments and the control in 2019. Because alfalfa quality in the control plots (that were located in between the flood plots) was also comparatively low in 2019, we decided to harvest two additional checks in 2020, one far away (commercial control) from the flood plots and the other adjacent (irrigation control) to the flood plots in 2020. There was a significant difference in CP, aNDF, ADF and ash content between the controls and the flood treatments, but overall feed quality was poor (in the control) and extremely poor in the flood treatments. The overall poor feed quality could be the result of winter management of the alfalfa stand. The alfalfa was not cut late in the fall season, resulting in a heavy stand early in the growing season that might have created favorable conditions for pests and pathogens. However, despite these management issues, the results show clearly that water application for groundwater recharge late in the spring (May) is influencing alfalfa forage quality much more heavily than early in the spring season (March), when temperatures are cooler.

Results from our experiments indicate that high-frequency and low-frequency flooding of dormant and semi-non-dormant alfalfa during late winter, early spring showed no significant effect on alfalfa yield (biomass production) but on feed quality, particularly the digestible fiber content of the alfalfa. However, more research is needed to identify whether decreases in hay quality are purely due to spring flooding, or due to stand management during the winter, or both.

Helen E. Dahlke is with the department of land, air and water resources at the University of California – Davis. Email Helen E. Dahlke.

Portions of this article first appeared in the 2021 Western Alfalfa and Forage Symposium proceedings.