Pennsylvania dairy farmers continue legislative efforts to offer whole milk as a choice in schools. 97 Milk is an educational campaign formed by this same group to further promote these efforts.

For the past few years, Pennsylvania dairy farmers and industry enthusiasts have been hard at work through legislation and education efforts to offer whole milk as a choice in schools. Composed mainly of dairy producers, the Grassroots Pennsylvania Dairy Advisory Committee is focused on legislative endeavors for whole milk while an educational campaign, 97 Milk, was formed three years ago.

When the campaign around whole milk promotion first started, it was to market whole milk as 3.25% fat, considering consumer misconceptions that it is 100% fat. Neither the committee nor the campaign negatively promote other milk types but rather develop education centered on whole milk and its benefits.

“There is no discrimination on other types of milk,” says Sherry Bunting, a freelance journalist who serves both on the committee and as a liaison to the 97 Milk campaign. “It is just that other groups are not promoting whole milk specifically.”

The legislative efforts around whole milk with representatives began in 2014, and the 97 Milk campaign started in 2019 after Nelson Troutman – a Richland, Pennsylvania, dairy farmer – painted a message on a white plastic-wrapped hay bale to promote whole milk as 97% fat free.

“I was so frustrated after milk marketing meetings,” Troutman says. “It felt like I had lost my best cow. I looked around the farm and an idea came to mind to paint the bale.”

Troutman has painted over 50 bales since the start of the campaign, and the need to continue education about the benefits of whole milk was advanced by Bunting and Jackie Behr, who serves as a consultant and manager for R&J Dairy Consulting.

After seeing the bales around Pennsylvania, Bunting wrote an article about the effort. Two weeks after the article was published in January 2019, a group of farmers and agribusiness people came together to discuss more ways of promoting information on whole milk. That was where the idea for the 97 Milk website and Facebook page originated. Behr oversees social media posts, creating advertisements, running the website and keeping information up to date for consumers. 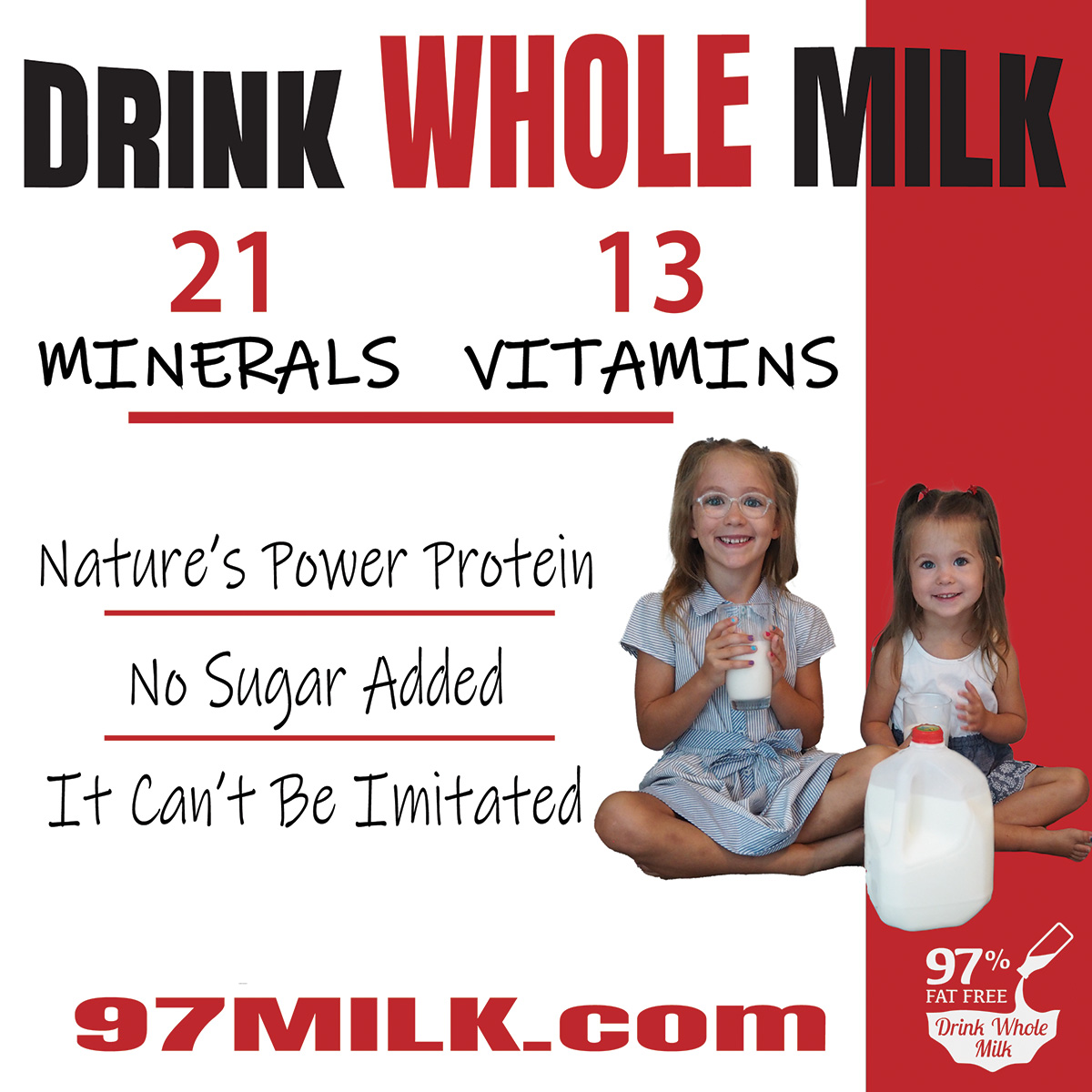 Facebook posts for 97 Milk focus on promoting the nutritional benefits of whole milk.

Behr shared the impact of the social media and website presence for 97 Milk in testimony during a 2021 hearing on whole milk. “In less than 24 hours, our Facebook page had 1,000 likes, and in seven days, we reached 2,000 page likes as well as reached 1.2 million views,” Behr said. “We also started seeing a steady flow of website traffic. People want to know about whole milk, and they want to know how to help local farms.” Today, the Facebook page has over 16,000 followers.

In the last few years, the 97 Milk campaign has experienced great success in Pennsylvania and other states to promote dairy products with facts. On the legislative side, members of the committee organized a petition in 2019 and 2020 to bring whole milk back to schools as a choice. The petition brought 25,000 signatures. With 95 cosponsors supporting the bill introduced by U.S. Rep. Glenn “GT” Thompson (R-Pennsylvania), the Whole Milk for Healthy Kids Act is in its third try and third legislative session.

“As adults, we get to choose every day, but our children and grandchildren are getting two meals a day, five days a week for nine months out of the year, and they do not have this choice,” Bunting says. “If children have a choice, they will likely drink the milk that is offered.”

An effective tactic used to engage consumers has been a 6-by-6 card that shares about whole milk and eight different foods that an 8-ounce glass of whole milk is equivalent to, such as broccoli and salmon. These cards serve as an impactful method of communication through powerful imagery and interesting facts, especially with young parents and members of Congress. 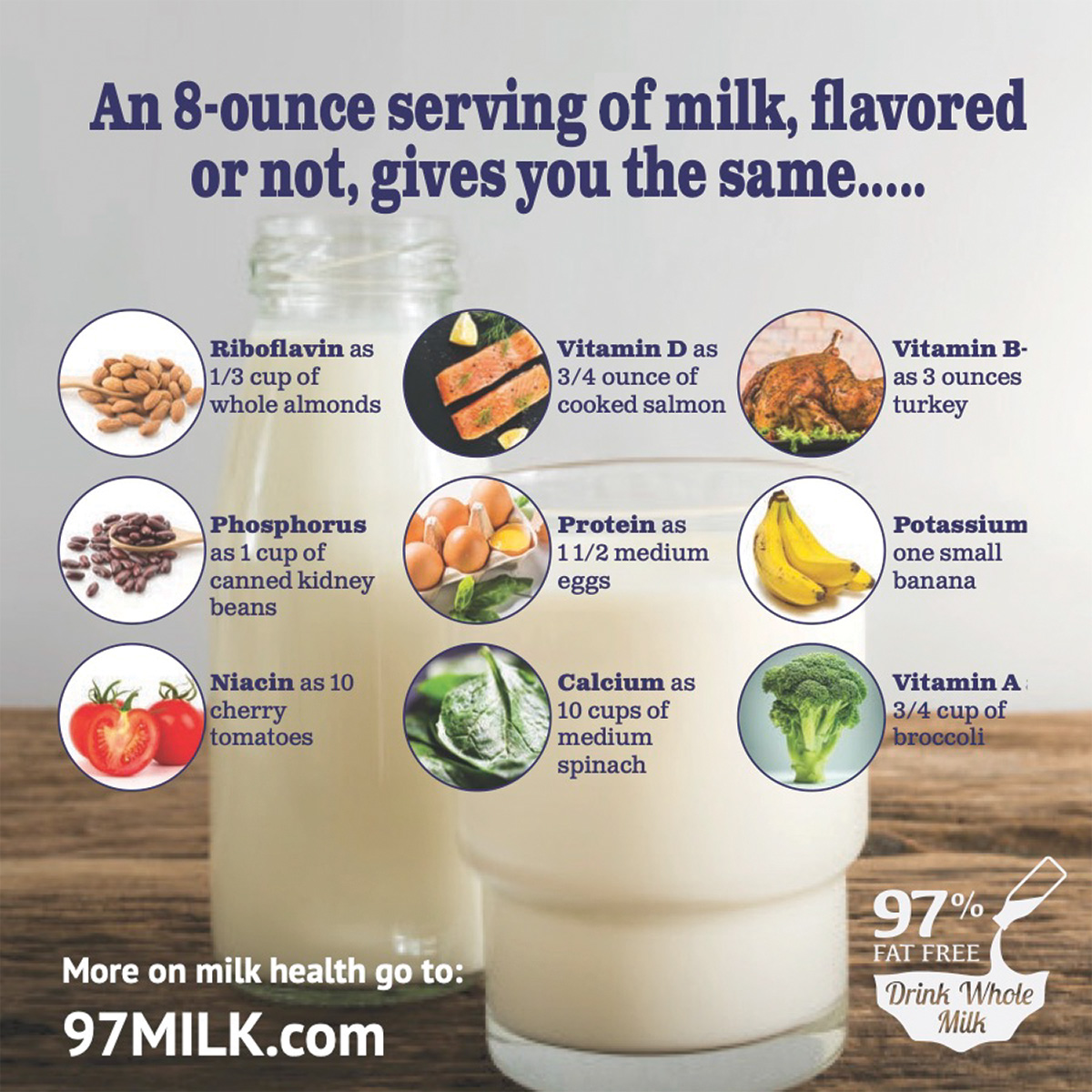 This 6-by-6 handout card was one of the most effective forms of communication with legislators and consumers about the benefits of whole milk. Photos provided by Jackie Behr.

“I went to a meeting in Harrisburg focused on policy and gave the cards to senators,” Troutman says. “Halfway through the hearing, one representative read the card to the audience and made sure the content was on record.”

Bunting has gathered many resources for the website and social media related to research about whole milk and its health benefits. “Whole milk is healthy and has certain advantages with absorption of vitamin D and other fat-soluble vitamins,” Bunting says. “There is research that shows those who drink whole milk have three times more vitamin D absorption, which is good for immunity. Those who drank whole milk were also 40% less at risk for becoming overweight.”

Additionally, several studies in schools show a 52% increase in selection of milk when whole and 2% milk was offered with 1% and skim milk. Students preferred whole milk 3 to 1, and there was a 95% reduction in milk waste in these studies. With the three-pronged effort of nutrition as a choice, milk waste reduction and health benefits, this is a win-win situation and why the bill is trying to be passed in the first place.

Tricia Adams, owner of Hoffman Family Farm in Potter County, Pennsylvania, and parent to three active girls, is a member of the committee and integrates whole milk into her family’s busy lifestyle. Adams is dedicated to children’s nutrition and uses her family as an example when advocating for whole milk in schools.

“I often use my kids as examples, and for a lot of children, this is possibly the only full meal they will receive in a day,” Adams says. “Many kids leave home early and without breakfast, and many kids have after school activities where it takes up the majority of their evenings.”

Looking to the future

With the aim of the 97 Milk campaign and its legislation continuing to grow, Behr reflects on how the campaign has gained momentum within the dairy community and beyond. “Consumers want to hear about dairy education,” Behr says. “97 Milk from the beginning has been successful by being real, transparent and positive.”

Even though the campaign is currently nationwide, there is still a lot of room to grow. There has been interest and feedback from other states such as Maryland, Wisconsin, Indiana, Kentucky, Ohio, Georgia, South Carolina, Virginia and Tennessee to buy promotional materials such as billboards and banners, and the campaign has also gained a strong following in New York. The campaign hopes to keep expanding community events to reach new consumers.

“When I have just one person listen and take the message home to try for themselves or make a dietary change, that is all I ask for,” Adams says.

What started as a way to promote the nutrition of whole milk and offer students in schools the choice to consume this dairy product has since developed into fostering positive consumer engagement. “These are grassroots, producer-driven efforts,” Bunting says. “We are making a difference for individual consumers to have the information they need to make informed choices.”

Earlier this year, 97 Milk filed for nonprofit status, which allows them to accept tax-deductible donations from individuals, businesses and others who support their efforts to grow milk education. As of August 2022, 97 Milk is pleased to announce that they are officially a nonprofit organization under IRC Section 501(c)(3). Donors can deduct contributions they make to 97 Milk under IRC Section 170 or tax deductible bequests, devises, transfers or gifts under Section 2055, 2106 or 2522. 97 Milk has always operated solely from donations and hopes that by becoming a 501(c)(3) organization it will encourage farmers, agribusinesses and others to support their efforts with a tax-deductible gift.

"Our goal has always been to connect with our local communities, but we are limited on how much we can do because we rely solely on donations," Behr says. "The more donations we receive, the more events, billboards and milk education information we can share with our communities."
If you are interested in donating please visit the website, or you may mail checks to 97 Milk, P.O. Box 87, Bird In Hand, PA 17505.