It may be hard to believe, but in the midst of a lengthy stretch of record-high temperatures, hay growers in some areas are turning attention to the arrival of frost. The Western drought sent regional hay prices higher, especially for dairy-quality hay. Demand from China pushed alfalfa exports to an 11-month high, but global sales of other hay continued to slump.

While drought intensity increased in some areas, U.S. Drought Monitor maps indicate overall moisture conditions improved over the past month, with most of the improvement in Missouri and parts of Montana. As of Sept. 6, about 39% of U.S. hay-producing acreage (Figure 1) was considered under drought conditions, 8% less than a month earlier. The area of drought-impacted alfalfa acreage (Figure 2) was unchanged at 45%. 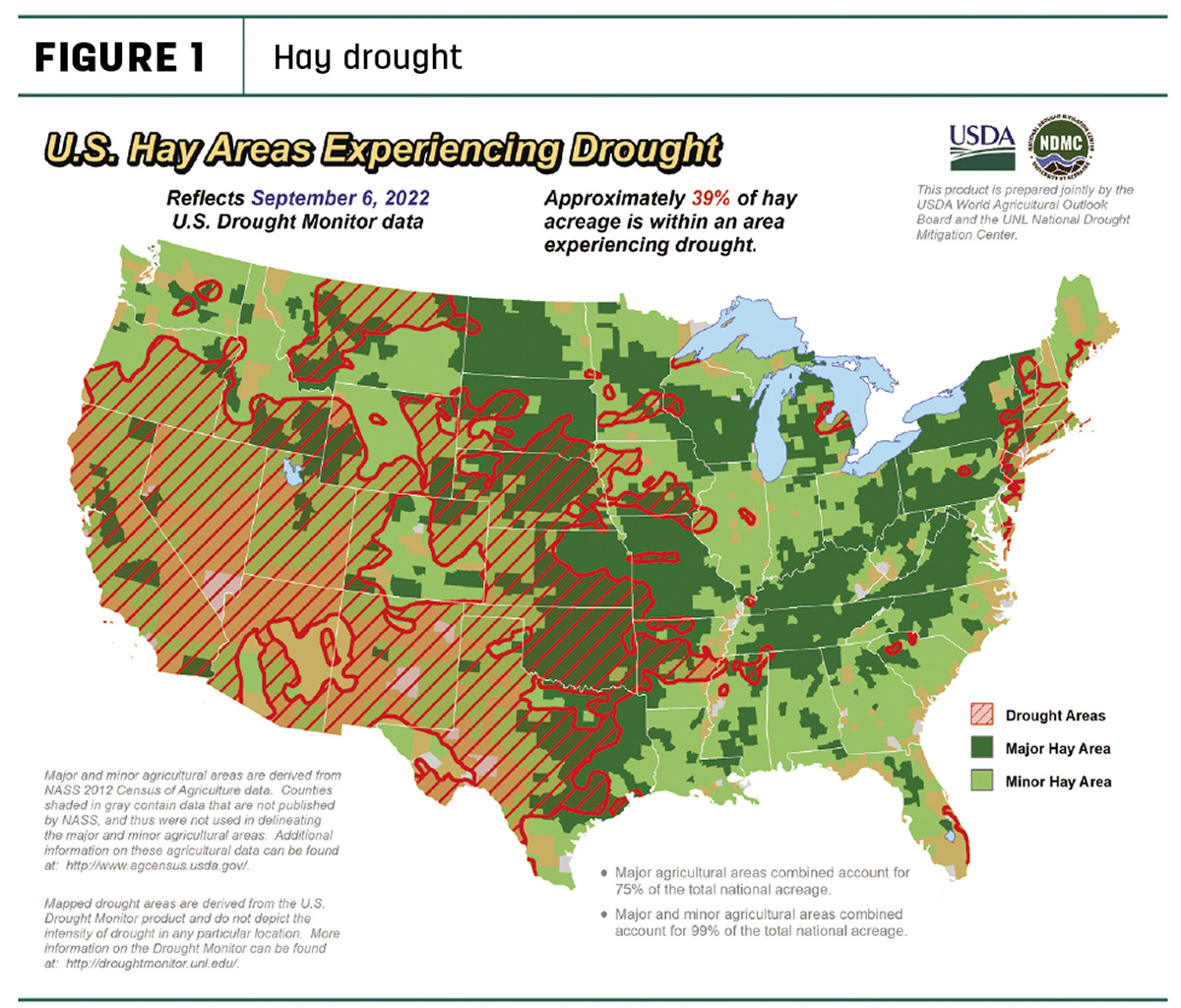 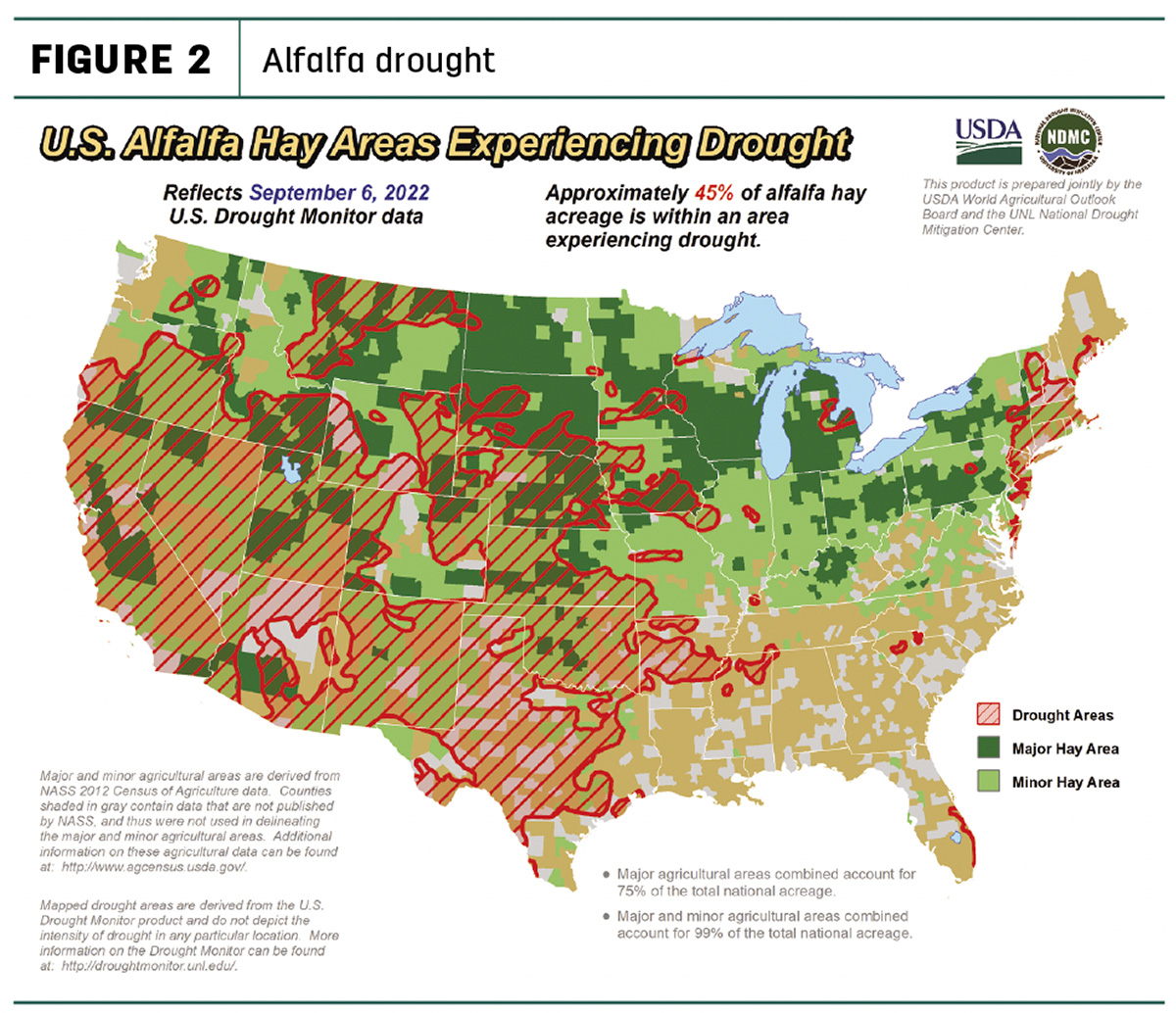 With Western surges in prices for both alfalfa and other hay, the U.S. average alfalfa price was $112 more than the average for other hay, likely an all-time record.

Price data for 27 major hay-producing states is mapped in Figure 3, illustrating the most recent monthly average price and one-month change. The lag in USDA price reports and price averaging across several quality grades of hay may not always capture current markets, so check individual market reports elsewhere in Progressive Forage. 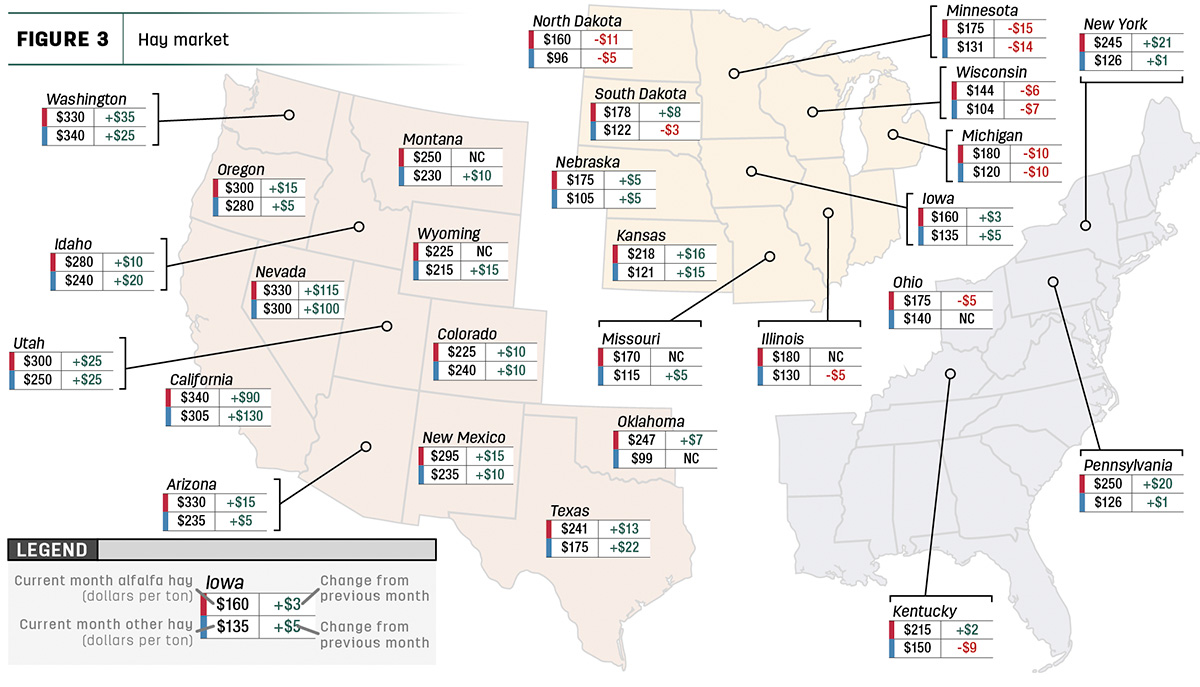 Pressured by skyrocketing prices in the drought-impacted West, July average prices for Premium and Supreme alfalfa hay in the top milk-producing states jumped $56 from June to $333 per ton (Table 1) and are up $101 per ton from a year ago. 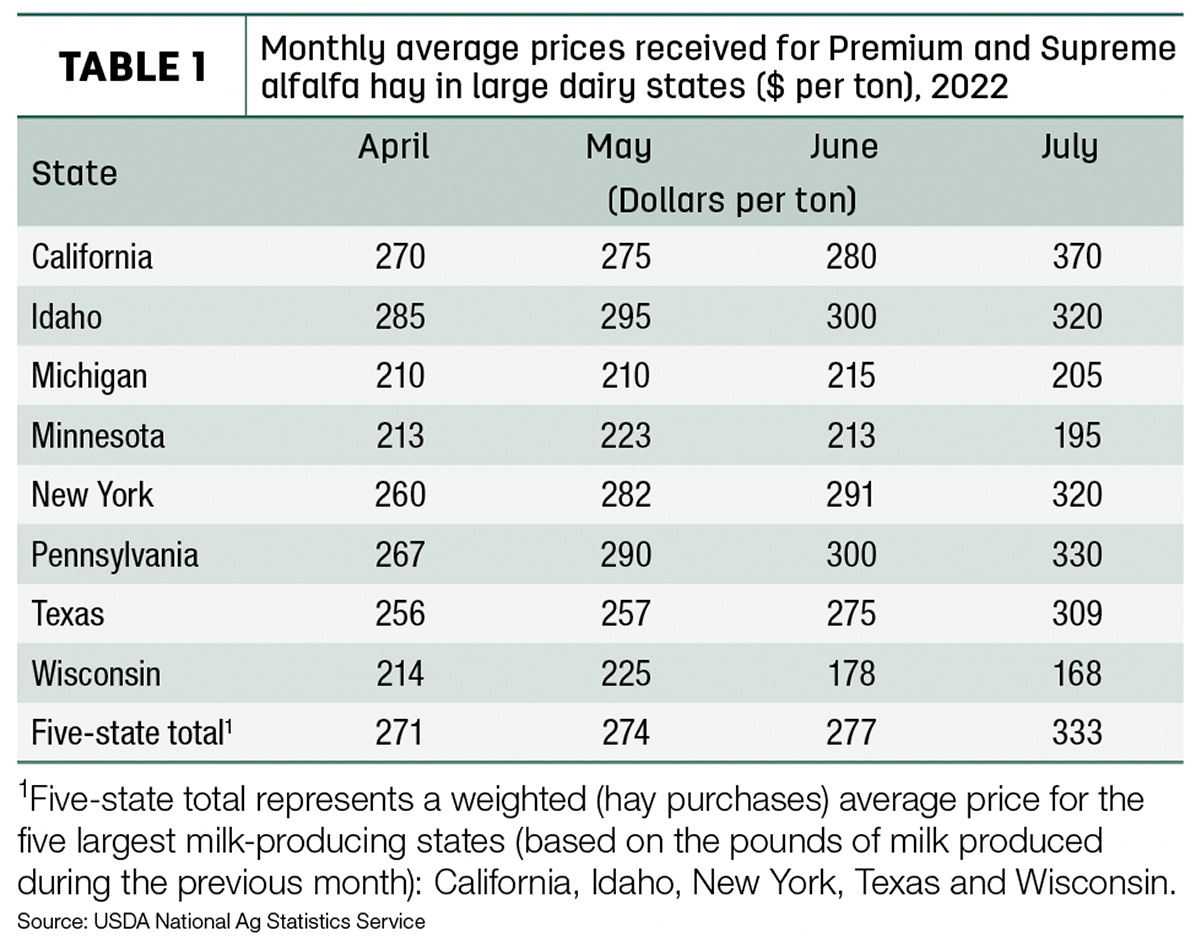 The U.S. average price for all alfalfa hay rose $31 in July to $276 per ton. Prices increased in 18 of 27 major forage states, led by Nevada and California. Prices declined in just five states, primarily in the Upper Midwest. Year-over-year price changes remained large in the West: Arizona, Nevada, Washington and California alfalfa hay prices were up $110 or more per ton compared to July 2021.

At $164 per ton, the July 2022 U.S. average price for other hay was up $18 per ton compared to June. Prices increased in 18 of 27 major hay-producing states, with largest month-to-month increases in California and Nevada, up $130 and $100 per ton, respectively. Average prices for other hay remain $80 and $115 per ton higher than a year ago in California, Utah, Washington, Nevada, Oregon and Idaho.

With the exception of the United Arab Emirates, July alfalfa hay exports to other major markets were steady to slightly lower. Sales to Japan at 34,098 MT were the lowest since August 2015.

Through July, 2022 alfalfa hay exports totaled 1.63 million MT, on pace to be the third-highest annual total on record, slightly behind export totals in 2017 and 2020. Alfalfa hay exports were valued at about $351 per ton, down about $39 from June.

Global sales of other hay told a different story, according to Christy Mastin, sales representative with Eckenberg Farms, Mattawa, Washington. At 83,184 MT, July exports fell to their lowest level since at least 2005, according to the USDA and Progressive Forage records. Shipments to the two largest markets, Japan and South Korea, were down due to stronger domestic inventories and disadvantageous currency exchange rates. July sales to Japan totaled 48,099 MT, the lowest volume dating back to at least 2013. Sales to South Korea at 19,956 MT were the lowest since January.

Reduced availability of U.S. timothy due to consecutive years of lower harvests is also a factor, making it difficult to compete with adequate supplies of good-quality Canadian timothy and better exchange rates, Mastin said.

Here’s a snapshot of regional markets to start September:

In Oklahoma, hay supplies continued to tighten while demand and prices rose. Recent rains helped but may have been too late to see another cutting of hay.

In New Mexico, alfalfa hay prices were steady with supplies tight for top-quality hay. The southern and eastern parts of the state were finished with the fifth cutting; sixth cutting was underway in some areas. Some hay producers reported an abundance of “black hay.”

In California, trade activity and demand were moderate to good. Retail hay prices were steady with tight supplies.

In Idaho, trade remained moderate with more pressure on rained-on supplies. Most sales were moving out of state. Demand remains good for alfalfa with no defects, even with low relative feed values.

In the Columbia Basin, all grades of alfalfa and timothy sold steady in a light test. Relative feed values remain low due to weather conditions during the growing season.

In Washington, harvest conditions improved, but shifting winds threatened to bring wildfire smoke into the area.

In Wyoming, most hay was staying in the local trade market, with some squares going to out-of-state buyers; prices were fully steady.

In South Dakota, demand was good for all types and qualities of hay. Third-cutting tonnage was limited due to the hot, dry conditions.

In Wisconsin, prices for dairy-quality hay were steady to strong, with lower-quality hay discounted.

In Alabama, hay prices were fully steady, with moderate supply and demand.

According to the U.S. Energy Information Administration, the Brent crude oil spot price averages $98 per barrel in the fourth quarter of 2022 and $97 per barrel in 2023. The possibility of petroleum supply disruptions and slower-than-expected crude oil production growth continues to create the potential for higher oil prices, while the possibility of slower-than-forecast economic growth creates the potential for lower prices.