CEO Corner: Automated systems still mean you have a payroll

Editor's note: CEO Corners are editors' compilations of business news from top publications, which they have tailored for the dairy industry. Given current dairy labor shortages, many producers are looking to automation to decrease their labor needs. But the dairy industry isn’t the only industry that finds automation attractive. McKinsey & Company, a global research and consulting firm, just released its top 10 list of the most popular business articles for the first quarter of 2017. Guess what topped the list? Automation.

The article, “Harnessing automation for a future that works,” illustrates that almost every occupation in the world has partial automation potential. In the article, they compare how much automation may be possible for many different industries. For example, they estimate that 48 percent of farm workers’ work could be automated and suggest that by 2055 the actual automation of these tasks would be complete.

I found it interesting that the industry with potential for automation that is most like that in agriculture is construction. Both industries have 10 percent or more of work that is predictable, physical labor. (Think milking cows.) They both also have data collection and processing that could be automated. (Think activity monitoring.) What I believe will be most interesting to see is how technology begins to invade the unpredictable, physical labor aspect of both industries. (Think autonomous or slave tractors, and then imagine even further that the regular maintenance of those machines could be automated as well.)

See a comparison of the potential for automation in the agriculture and construction industries below.

Click on the image below to view a larger version. 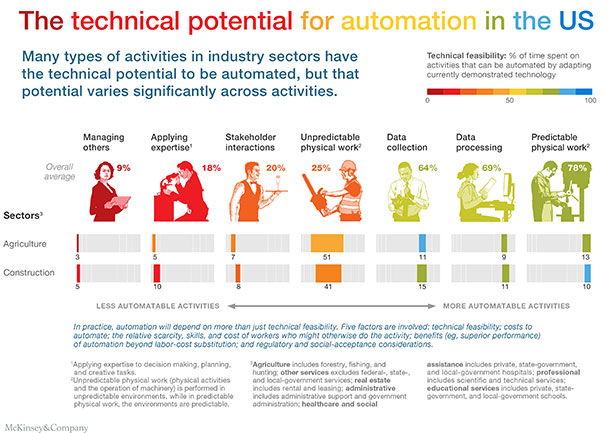 Navigate here for a comparison of agriculture’s automation potential with that of 18 other industries.

“While much of the current debate about automation has focused on the potential for mass unemployment, people will need to continue working alongside machines to produce the growth in per capita GDP to which countries around the world aspire. … Our analysis shows that humans will still be needed in the workforce: The total productivity gains we estimate will only come about if people work alongside machines. That in turn will fundamentally alter the workplace, requiring a new degree of cooperation between workers and technology.”

These findings dovetail with comments I recently heard during the robotic milking panel at the Western Dairy Management Conference. The dairy farmers on the panel found the introduction of robots didn’t replace all labor – it just changed the type of labor they needed. The consensus of the panel was that it changed their need for low-skilled, repetitive labor to medium-skilled, varied labor. In short, to successfully work with milking robots, they needed more of a “well-rounded” person – someone who could problem solve, be handy with tools and at the same time know cow behavior.

So if you’re hoping for a future without the complexities of employee management, it may be a while coming. If you’re shopping for the latest in automated technologies, also start searching for a few well-rounded employees, ones that can put all that automation to work toward peak milk production.

Measure it to manage it; then benchmark it with others

New research this week released in the May issue of the Journal of Dairy Science confirmed that if you measure an outcome on your dairy, compare how you did with your peers and then do something to make it better, you will actually improve. In short, you can’t manage what you don’t measure.

Researchers from the University of British Columbia selected 18 Canadian farms to participate in a study, each with more than 100 cows. They wanted to observe the effects benchmarking would have on failure of passive transfer (FPT) and average daily gain in pre-weaned calves.

They wrote in their hypothesis, “Comparing one’s own performance with others provides context to reflect on current practices and identify areas for improvement.” They guessed the farms that would participate would make management changes after seeing their benchmark results in order to improve outcomes.

For simplicity, I’ll discuss the results of their findings on failure of passive transfer, although similar results were found for benchmarking average daily gain.

Before the trial, only one of the farms even tested colostrum quality – and only rarely – let alone monitored failure of passive transfer. (Note: Only 15.5 percent of all U.S. dairy farms report they test colostrum quality with a colostrometer or Brix refractometer, according to the USDA’s 2014 National Animal Health Monitoring Survey. The same survey found only 6 percent of all dairies routinely screen for failure of passive transfer.)

The researchers observed the participating farms for several weeks and recorded data to be blindly shared with the others in the study. A veterinary clinic facilitated the benchmarking.

The researchers did not speculate as to what specific aspects about the benchmarking process led to the improvements – such as systematically collecting data, comparing data with other farms, having a veterinarian facilitate the discussion or perhaps producers’ competitive drive. However, you should know this: Benchmarking may be the secret ingredient to improve that stubborn area of your dairy that is just average.

After you’ve identified an area (or two) of your dairy to improve, talk to your veterinarian. See if he or she would be willing to help collect data to measure that aspect of your dairy, as well as from others nearby, and provide all involved with a benchmark report. It could make all the difference.

Read more about the research here.