Making it to the top in the ultra-competitive world of Holstein genomics is a tough game. Do it once, and they might call you lucky. But rank among the best year after year? That’s another thing altogether.

An early proponent of using genomics as a mating tool, Dan Siemers is co-owner and operator at Siemers Holsteins in Newton, Wisconsin.

They are the fifth generation on the farm, and the family has been active merchandising and showing registered Holsteins for several decades.

The Siemers’ breeding program focuses on GTPI and type. “We have always been ‘cow family’ people, but genomics has changed how we look at bulls. We made the switch to nearly 100 percent genomic bulls almost immediately,” notes

Siemers, who early on saw the significant genetic gains to be made using genomic-tested young sires that had higher reliability numbers than those that weren’t tested. With a large herd at hand, they did extensive testing and sorting of their own females.

“When genomics came on the scene, we tested all animals on the farm we thought had a chance of being high. Back in the ‘good old days,’ it was common to find huge outliers, but at that time it was humbling as well. High numbers for a trait are where you find them, not always where you would suspect they would be,” he adds.

In order to gain more diversity of genetics within their herd, the family acquired high-end females from other breeding programs over the years and mated those animals with top sires. Siemers recognizes the contribution of those individuals.

“Some of our best families were the result of purchases,” he comments. Notable purchased females would have to include Gen-I-Beq Shottle Bombi EX-94 and Cherry Crest Manoman Roz EX-90 (the foundation dams behind Siemers-bred heifers currently high on the GTPI female list) and Ransom-Rail Explode Pety EX-90, the dam of Siemers Mogul Pety, who is in turn the sire of one of the breed’s most popular bulls, Bacon-Hill Pety Modesty +2872 GTPI.

While he is a complete believer in genomics as a tool for making better Holsteins, Siemers still wants the actual performance data. “We’ve been happy with the positive changes within our herd as a whole, but genomic figures still don’t tell the entire story.

Reliability is much better than parent averages, but it’s still not a complete replacement of actual performance. In our herd, conformation has always played a bigger role than many experts or other breeders would find necessary. Our best classified cows make more milk and last longer on average than the others. It’s not by accident that we have over 1,000 Very Good and Excellent cows,” Siemers emphasizes.

As to the secret of staying at the top of the genomics game? For Siemers, it’s not much of a secret, just part of an overall plan. “Staying true to yourself and what works for you is key. We’re excited about the future of the dairy business and the Holstein cow.

If you are new to the business, study what works well for you and go for it. When buying genetics, whether it is semen, embryos or females, buy the best you can afford. On the genetic front, there has never been a better time to make significant progress.” 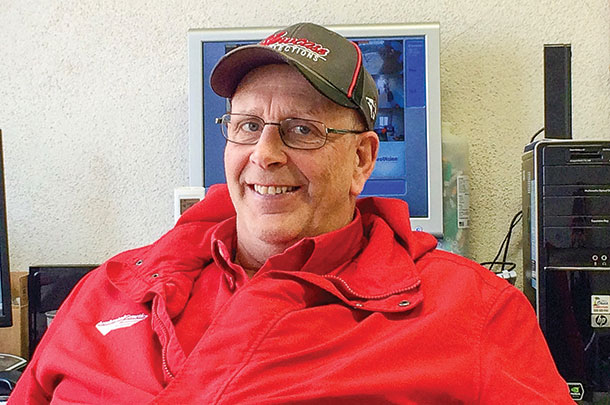 Les Terpstra, genetic manager at Rock Hill Dairy in Dexter, New Mexico, is another believer in the predictive power of genomics. “I’m 1,000 percent sold on it. We very quickly moved to using genomic young sires.

Now as those 2-year-olds are calving in, we see they are a significant step up in quality, and they are exactly what their genomic numbers said they would be,” he announces.

Owned by the Villalpando family, the Rock Hill operation consists of several dairies milking a total of 25,000 cows, with one 2,000-cow facility focusing on registered Holsteins and elite genetics. Their Leaninghouse prefix has been prominent on the high-GTPI male and female lists in the past couple of years as the results of their breeding program came to fruition.

In 2013, they started to focus on genomics and purchased a good number of individuals as foundation females. Terpstra instituted an aggressive mating program for those females with an eye to the future. “We bought animals out of really good cow families – not the most expensive heifers, but heifers with good balanced numbers – and bred them to the best available bulls.

We focused our program on producing high-end embryos to market and on producing elite bulls to go into A.I.” Several Leaninghouse-bred sires are currently making a name at stud, including Leaninghouse King Abel +2713 GTPI and Leaninghouse Big Bubba at +2926 GTPI.

Now working almost exclusively with home-bred individuals, the highest-testing females are retained by the operation and become the new donors on their extensive in vitro fertilization (IVF) program. “Our working-age heifers need to be +2750 GTPI or higher to qualify as a donor.

We use sexed semen with our IVF program, as our goal is to have lots of females to build a better herd of cows,” Terpstra comments, indicating the other purpose of the program: to raise the genetic level of their overall herd.

As their breeding program has matured, he now selects heavily for Daughter Pregnancy Rate, milk production, udders, and feet and legs, noting, “You need cows that get bred, produce well from good udders and have good mobility. If you don’t have those four, you don’t have anything – all the other categories are fluff without those.”

Using this common-sense approach, he thinks they will continue to produce high-testing males and females. Currently, they have 230 head over +2700 GTPI, with five over +2900 GTPI. A recent classification produced 42 Excellent, 247 Very Good and 334 Good Plus cows in the registered herd.

He’s quite pleased with the 2-year-olds by Kingboy, Monterey, Supershot, Silver, Tango and Yoder – bulls he used as genomic young sires.

While Terpstra keeps an eye on inbreeding when determining matings, he isn’t overly concerned about it. “I do more research now on the new sires to see what’s in their pedigrees, but there are enough good bulls of other blood that will be great contributors. We flushed heavily to Jedi and Modesty and are still breeding cows in the herd to them. You can never have too many daughters out of a great bull.”

“Genomics has changed how I breed cows compared to years ago. It will continue to get better as reliability increases and gives us more and more confidence in the information. It may be the best tool ever for breeding cows because of that validity of information. It certainly will be a staple of our operation as we make progress and move forward.”

PHOTO 1: Raising the genetic level across the entire herd is a primary goal at Rock Hill Dairy. These young heifers are part of the focus on improvement.

Kathleen O’Keefe is a freelance writer based out of Hammond, Wisconsin.