The edible onion, Allium cepa, is a cultivated species in the Allium genus. All members of Allium have important dietary and medicinal properties. While water and carbohydrates make up a large majority of the fresh onion, fiber, flavonoids and alk(en)yl cystein sulfoxides (ACSOs) confer many of the purported health benefits and aroma properties.

Specifically, the flavonoids and ACSOs have been shown to have anti-inflammatory, anti-microbial, anti-cholesterol, anti-cancer, antioxidant properties and other beneficial effects. Because onions are low in fiber and high in sugars, they are a digestible source of nutrients and energy and are used as animal feed.

An analysis of cull onions is presented in Table 1. Onions were high in moisture content (90 percent moisture), which limits the storage time on a dairy. The crude protein concentration was 9.4 percent, slightly higher than corn grain, but onions were reported by others to contain 7.4 to 12.9 percent crude protein.

Onions were low in fiber and lignin, and high in sugar, resulting in highly digestible carbohydrate content in the rumen. The acid detergent fiber (ADF) content of our sample was 8.6 percent and the neutral detergent fiber content was 10.6 percent. However, onions have been reported to contain up to 28 percent ADF.

Our sample of cull onions contained 0.49 percent calcium and 0.46 percent phosphorus. However, the calcium content of onions varies greatly and has been reported from 0.31 percent to 1.8 percent. Phosphorus content ranged from 0.21 to 0.52 percent. Onions with skins may result in higher amounts of fiber (ADF and NDF).

Analysis of cull onions for nutrient and energy composition prior to feeding will allow for accurate formulation of rations. Without nutrient analysis, a general safe feeding practice is to feed onions at 2 to 3 pounds of dry matter per lactating cow (20 to 30 pounds as-fed basis) and not to exceed 5 percent of the ration dry matter.

Disease from onion exposure is typically seen when large amounts of cultivated onions or onion waste are repeatedly fed. Cases of overexposure usually occurs in areas where onions are an important agricultural crop and excess production may end up as cattle or sheep feed.

In California, cull onions account for 10 to 20 percent of the harvest weight. Cull onions can contain onions (bruised, crushed and spoiled) and onion skins (outer layers along with top and bottom trims).

Onions contain many organosulfur compounds. Once ingested, these organosulfide compounds can be absorbed from the gastrointestinal tract and may undergo further metabolism in the liver. Many of the disulfides form highly reactive, toxic oxidants that are potent hemolytic agents.

When hemoglobin is oxidized, it can denature and form Heinz bodies in red blood cells. Clinico-pathological changes in poisoned animals include decreased hematocrit, hemoglobinuria, Heinz body formation and hemolytic anemia.

The difference in susceptibility is primarily based on the differences in animals in terms of protective mechanisms against oxidative damage to red blood cells. The mode of action is more complicated in ruminants.

In a study conducted in 1992, 36 calves weighing 529 pounds were fed diets containing 0, 5, 10, 15, 20 or 25 percent cull onions on a dry matter basis for 119 days. Animal performance was not significantly affected, but calves fed the higher amounts of onions displayed reduced performance (Table 2). 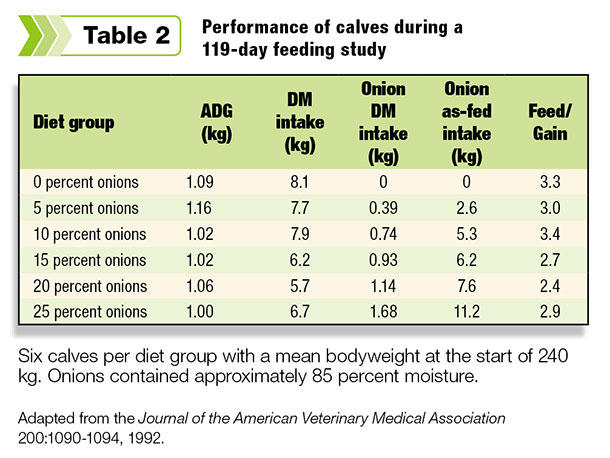 Within 30 days after onion feeding stopped, red blood cell counts returned to normal values. Heinz body formation was seen in a dose-dependent manner. Interestingly, despite the hematological changes, no calf developed overt clinical signs. The results of this study have been the basis for the recommendation that onions should not be fed at levels higher than 25 percent of dry matter intake.

However, this recommendation should be viewed with caution because lactating dairy cows eat considerably more than calves that are fed for meat production. Onion consumption in pounds of onions per kg bodyweight would be high for lactating cows using the 25 percent of dry matter intake upper limit.

In addition, rumen conditions such as pH and microbial population will be different for a lactating dairy cow, which may impact the conversion of compounds in onions to toxic oxidant metabolites. In addition, variations in compounds leading to oxidative damage vary between the bulbs and skins of onions, adding an additional risk factor.

We could find no data on the effects of long-term feeding of onions on cattle health and performance. This may not be a major concern since the availability of cull onions for feeding is usually limited to the harvest and processing season.

It is interesting to note that Idaho regulates (IDAPA 02.06.17) the disposal (e.g., feeding, land application, composting) of cull onions to prevent the spread of disease that could affect the onion crop. Feeding after March 15 of each year also has regulations. For cattle, the law states “Cattle shall be fed a ration containing no more than 25 percent cull onions on a dry matter basis.”

Cull onions can be fed to livestock ruminants, but caution should be used with respect to the level of feeding. Cull onions can be reasonably priced, but feeding high levels for long periods of time may reduce animal performance.

Producers should be observant of any changes that occur with animals: for example, animals going off-feed or developing weakness, which may be signs of poisoning. Clinical signs in addition to lack of appetite can include tachycardia (rapid heart rate), tachypnea (rapid breathing), staggering and reduced rumen motility.

Dairy and livestock producers should obtain the advice of experienced and knowledgeable nutritionists and veterinarians when feeding cull onions. PD