Olive pulp: A byproduct feedstuff that will increase in future

Olive pulp (also called olive pomace or olive cake) is what remains after olives are crushed and the olive oil is extracted. Olive pulp contains the pulp, skins, stones and water. The California Olive Oil Council reported that in September 2011 there were approximately 30,000 acres of olives for oil production in California and that there will be 5,000 new acres planted each year through 2020. The amount of olive pulp available as a byproduct feedstuff for ruminants will increase in the future.

The rapid growth of the olive oil industry is related to the monounsaturated composition of the oil and studies which link consumption of monounsaturated oils with improved cardiovascular health.

In 2008 there were 650,000 gallons of olive oil produced in California, with production increasing to over one million gallons in 2010.

Olive pulp constitutes 50 to 80 percent (depending on extraction method) of the original olive weight, which means there was probably more than 30,000 wet tons of pulp for disposal in 2009.

Land application of the waste product (olive pulp) is limited because of detrimental impacts on the soil environment and potential groundwater contamination.

In December of 2008, we fed the olive pulp from olive oil produced at UC Davis to cattle at the beef feedlot. We analyzed the pulp in the Dairy Milk Components Laboratory and found it to be 28.9 percent dry matter (71.1 percent moisture). The chemical composition of the olive pulp is presented in Table 1.

We also looked at the fatty acid profile of the fat in the olive pulp. As expected, the fat was mainly unsaturated in composition with 64.7 percent oleic acid (C18:1 cis 9) and 8.5 percent linoleic acid (C18:2 cis 9, cis 12) with a small amount of saturated fatty acids including 12.2 percent palmitic acid (C16:0) and 3.5 percent stearic acid (C18:0). These four fatty acids accounted for 89 percent of the total fat. 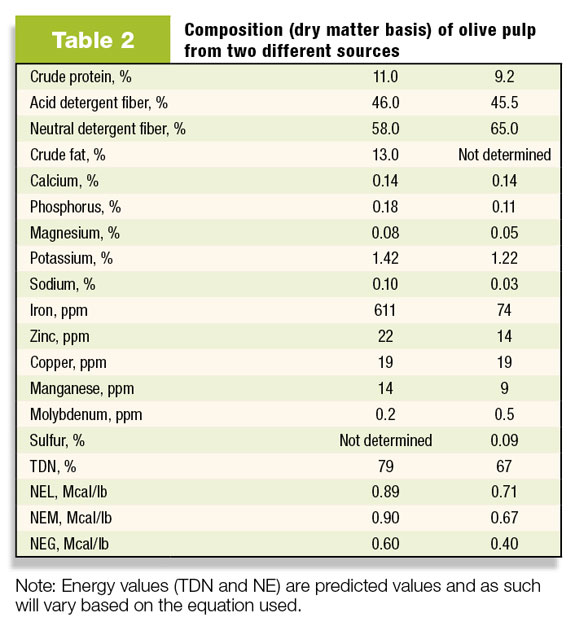 The nutrient composition of the olive pulp will likely be affected by the olive variety, method used to extract the oil, season and agronomic conditions plus the impact of how and for how long the olive pulp is stored prior to feeding.

Tannins are a group of polyphenolic compounds found in plants. The theory is that some plants evolved to synthesize tannins as a way to deter herbivores from eating them.

Tannins are grouped, based on their chemical structure, into either condensed or hydrolysable tannins. Olive pulp contains condensed tannins based on literature reports.

The concern about condensed tannins is that their consumption by animals, typically referring to non-human animals, has been associated with damage to the liver, kidneys and gastro-intestinal tract.

A research report in 2008 stated that the tannins had no deleterious impacts when fed to sheep and goats based on creatinine concentration and alkaline phosphatase activity in blood, which were measured as indicators of renal and hepatic functions, respectively.

However, in both goats and sheep the digestibility of dry matter, crude protein and neutral-detergent fiber was decreased when olive pulp was added to the diet at 12.8 percent of the dry matter.

Another study involving the feeding of condensed tannins to sheep found that at only high dietary concentrations lesions were found in the digestive tract.

At the UC Davis feedlot, the olive pulp was added as 100 pounds (as-fed basis) to 2,000 pounds of starter ration. That is about a 2 percent inclusion rate on a dry matter basis – very low level. Plus the feeding period was short.

The tannin and polyphenol contents of olive pulp might be affected by pulp storage method, pulp drying, olive variety and method of oil extraction.

The effects of tannins and other polyphenols in olive pulp when fed to livestock and dairy are not known. Information in the literature with feeding condensed tannins from various sources was often based on short-term feeding studies, and the tannins were often not fed to high-producing animals.

The potential impact of higher levels and longer feeding periods for tannins and polyphenols on animal health and performance is not well defined. Even though many questions remain to be answered, olive pulp is fed to livestock and dairy at present.

If you are feeding olive pulp, it is wise to obtain the advice of a knowledgeable nutritionist. PD