Increasing demand for canola oil has greatly increased canola cultivation. In Canada alone, canola production has grown from about 3 million tons in 1991 to nearly 18 million tons in 2013.

This has resulted in greater availability of canola meal and made it a viable alternative to soybean meal as a protein source for livestock.

During the past few years, we conducted several feeding trials at the U.S. Dairy Forage Research Center in Madison, Wisconsin, comparing the yields of milk and milk components from lactating dairy cows supplemented with either canola meal or soybean meal.

As expected, cows fed the urea diet did not perform nearly as well as those supplemented with one of the three true proteins: Dry matter intakes were 4.6 to 6.2 pounds per day lower, while milk yields were depressed by 16 to 18 pounds per day.

That canola meal could outperform soybean meal was surprising because the NRC-2001 dairy nutrition bulletin, which is widely used in formulating dairy rations, indicated metabolizable protein supply – the protein directly available to the cow after accounting for microbial action in the rumen – should have been greater on soybean meal.

These findings stimulated our interest in running an experiment designed to see how canola meal stacked up directly against soybean meal. Results from that trial, which were published recently, showed a production advantage to canola meal versus soybean meal (Table 1): Cows ate 0.9 pounds more dry matter per day and secreted 2.2 pounds more milk per day containing 0.11 pounds more fat and 0.07 pounds more true protein per day. 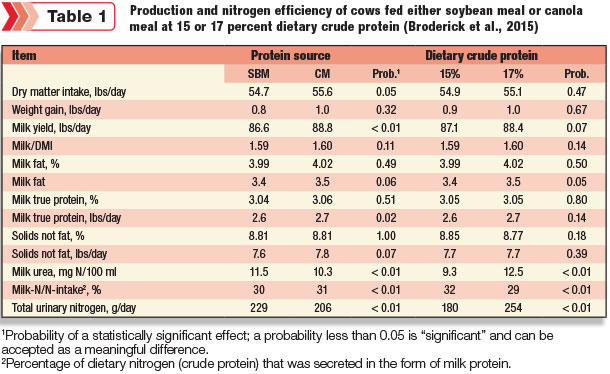 Click here or on the image above to view it at full size in a new window. (PDF, 130KB)

Additionally, the study showed the canola meal advantage over soybean meal held up at both 15 and 17 percent dietary crude protein. Milk urea is elevated when protein efficiency declines; milk urea concentration was lower on canola meal versus soybean meal.

Examining Table 1 also shows that, aside from somewhat higher fat yield, the major effect of increasing crude protein from 15 to 17 percent was to elevate milk urea and nitrogen excretion in the urine, a direct indication of reduced protein efficiency.

The main thing that happened with feeding more protein in this trial was for the cows to excrete more urinary nitrogen. Although these data are not in Table 1, two other findings were notable in this experiment: A 50-50 protein mixture from canola meal plus soybean meal performed about as well as canola meal alone, and supplementing the rumen-protected amino acids methionine plus lysine had no effect.

Feeding rumen-protected methionine alone has given small boosts to milk and protein yield in a number of other studies, particularly when soybean meal was the major supplemental protein. That response was not seen here for either canola meal or soybean meal.

We have recently completed a second feeding study comparing canola meal to soybean meal in cows fed diets containing various ratios of alfalfa silage to corn silage. Results from this experiment are not yet published but, again, about 2 pounds per day more milk were produced on canola meal.

There are also quite a few other reports in the literature comparing these two protein sources. Researchers in 2013 summarized literature data from 27 feeding trials comparing canola meal with soybean meal and a number of other supplemental proteins and found that protein yield was greater on canola meal, but that there was no difference for milk yield.

In an even larger literature study, researchers in 2011 summarized results from more than 100 mostly European experiments in which dairy cows were fed soybean meal, canola meal or canola meal that was heat-treated to increase its content of rumen-undegraded protein (RUP).

The researchers found that canola meal improved feed intake plus yield of milk and milk components versus soybean meal, but heat-treated canola meal performed about the same as conventional canola meal.

There is a clear advantage to heating soybean meal to increase its RUP content, and a number of excellent heat-treated products, such as expeller soybean meal, are available in the marketplace. All of our trials, and virtually all of the literature comparisons, have compared solvent-extracted forms of canola meal and soybean meal, which are subjected to very little heating during processing.

Despite this, we found lower rumen concentrations of ammonia and branched-chain volatile fatty acids, both of which are formed from protein degradation in the rumen, when canola meal rather than soybean meal was fed. Some of our colleagues from Sweden and Finland, who have had longer experience feeding canola meal, doubt that heating would improve the usefulness of canola meal protein; this is consistent with findings of researchers in 2011.

Nevertheless, our rumen in vitro studies (in which rumen fluid from cannulated cows is incubated with canola meal to test protein degradability) indicated small but consistent differences in RUP contents of canola meal from different Canadian processing plants. At the University of Nevada, professor Antonio Faciola and his graduate students are evaluating heat-treated canola meal to see if it will provide more metabolizable protein than conventional canola meal.

So canola meal appears to be a somewhat more effective protein supplement than soybean meal, possibly because it has more RUP with more of the essential amino acid methionine. However, farmers must adjust for composition differences when replacing part or all of the dietary soybean meal with canola meal. Table 2 shows mean nutrient contents of these meals from our second trial.

Click here or on the image above to view it at full size in a new window. (PDF, 130KB)

Because of its lower protein content, about 1.3 pounds of canola meal must be fed to replace 1 pound of soybean meal. This extra space in the ration will likely come at the expense of corn or other grain, slightly lowering energy density.

Although canola meal has a little more digestible energy as oil, it is also substantially higher in fiber content, which will also dilute dietary net energy of lactation. When price is about equal per unit of crude protein, canola meal is a slightly better buy than soybean meal.

Milk yield was greater by about 2 pounds per day and protein yield by about 0.07 pounds per day – the protein equivalent of 2 pounds of milk – when canola meal replaced soybean meal. These responses occurred in three different trials and were observed on diets containing either 15 or 17 percent crude protein.

Because of its lower protein and greater fiber contents, dairy farmers will need to rebalance their rations when replacing dietary soybean meal with canola meal.  PD

PHOTO: There has been some discussion as to whether canola meal outperforms soybean meal in dairy diets, and further, whether heat-treated canola is more advantageous than non-heated meal. A new study provides insights. Photo provided by Glen Broderick.