This time of year, when producers are filling silos, bunkers or bags, I often get calls wondering which gases are coming off the silage. During fermentation, many different gases are formed. For the most part, the formation of gas is completely normal.

In the silo, a portion of solid feed is consumed by micro-organisms and converted into a gas. I expect gas formation to occur for roughly a week after a silo is sealed, although some silos can produce gas for even longer. To state the obvious, you cannot feed gas to cows.

Therefore, any production of gas represents a loss of dry matter and less feed available to meet your herd’s nutrition demands throughout the year. Some gases are less desirable than others.

Typically, carbon dioxide (CO2) is the most abundant gas produced, and it is harmless to inhale in small doses. Different fermentations produce different quantities of CO2, which is why some fermentations are more efficient in dry matter recovery than others.

For example, a true homolactic fermentation does not produce any CO2, whereas a clostridial fermentation produces a lot, resulting in a great deal of dry matter loss.

CO2 formation is not necessarily a bad thing, as it does help to preserve the silage. During the initial fermentation, oxygen is respired into CO2 by aerobic bacteria. These bacteria often also degrade the quality of the silo.

However, once the oxygen is fully consumed, and the silage reaches anaerobiosis, aerobic bacteria are not able to thrive, and fermentation begins. In this way, CO2 production represents the achievement of a desirable state.

A two-dimensional mass spectroscopy analysis of either alfalfa or corn silage reveals thousands of volatile or gaseous compounds are produced during a normal fermentation. Acetic acid, a commonly known antifungal, is just one of those many gases.

When people hear of “silo gas,” they typically think of the poisonous nitrogen dioxide. Normally, nitrates are produced in the plant to be used to produce protein. In a healthy plant, they are used just as quickly as they are produced.

However, nitrates may accumulate in the plant, especially (but certainly not exclusively) in stressed conditions, such as drought, hail, frost, cloudy weather or fertility imbalance. Heavy nitrogen fertilization can also contribute to more nitrates in the plant and silo. Typically, nitrates accumulate in the bottom of plants. If you are in an area that has been stressed, you are especially prone to silo gas formation. 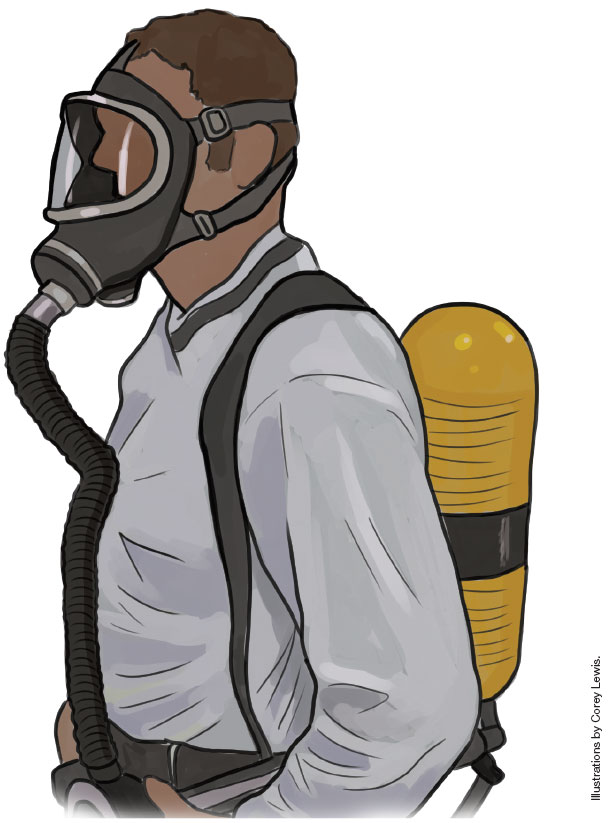 These nitrogen oxides are what we traditionally know as silo gas. Nitrogen dioxide is the most dangerous silo gas, and it reaches a peak about three days after harvesting. Traditionally, brownish-colored gases and yellow silages are associated with silo gas.

If you see the brownish gas or smell a “bleach” aroma, it is crucial to leave the area immediately and alert anyone else who may work with the silage. Keep kids, animals and people away from the silo.

Many do not know nitrogen dioxide can be colorless and odorless. Just because you do not notice a chlorine smell or see the typical brownish-colored gas, it is not safe to assume there is no deadly silo gas present.

Even in a silo that appears normal, silo gas may be present and deadly. Silo gas is heavier than oxygen, so it can displace oxygen, giving a person little warning before he or she is overcome. This is especially the case with upright silos.

Inhalation can lead to severe irritation, inflammation and burns to the nose, throat and lungs. A person can collapse and die within minutes of inhaling silo gas. However, what makes silo gas especially dangerous is: Low levels of silo gas can have delayed symptoms.

Therefore, a person may continue working and inhaling silo gas, ignoring the mild irritation he or she experiences. Then, later in the day, more severe symptoms (fluid in the lungs, chemical pneumonia) can set in, and by then it may be too late to save the person.

The top goal of harvest: Safety

Safety measures will go very far in these situations. Never enter a silo within the first three weeks after ensiling. If you do need to enter the silo before it is properly cured, use of a self-contained breathing apparatus would be beneficial.

Dust masks or chemical respirators will not offer sufficient protection. Vent the silo by running the blower for at least 15 to 20 minutes before entering. Never enter a silo alone; make sure someone is located outside the silo to act as a spotter and contact rescue services if needed. Also, never enter to perform a rescue without the proper equipment and assistance. Approximately 60 percent of the fatalities reported are rescue attempts.

The good news is: Some steps can be taken to avoid silo gas formation.

In drought-stressed conditions, do not harvest for at least three days after a soaking rain. Don’t skimp on this number. Nitrates typically accumulate in the bottom of drought-stressed plants and, when it rains, they travel up the plant. They take some time to be turned into plant proteins, so if you cut them before three days have passed, you get lots of nitrates in the silo.

Raise the cutter bar for stressed crops, since nitrates accumulate in the bottom of the plants. Typical fermentations will destroy 30 to 60 percent of silo gases, so allow the silage to undergo a good fermentation before opening the silo.

Finally, if you think you may have high nitrates in your feed, after it is ensiled, send it out for testing and get it checked. Nitrate-nitrogen levels less than 1,000 parts per million are safe; levels between 1,000 and 1,700 need to be gradually introduced to the ration, and levels above 1,700 can cause toxicity.

At the end of the day, we are all trying to make the best-quality feed possible. Silo gases are inevitable and can range from completely harmless and beneficial to quite dangerous. A little bit of knowledge and planning can go a long way toward the production of healthy and high-quality feed.

What is an SCBA or supplied-air respirator?

A self-contained breathing apparatus (SCBA) or a supplied-air respirator are the only respirators to be used in manure pits, sealed silos or fumigated bins containing high-moisture grain. They supply the wearer with fresh, clean air from an outside source.

Airline respirators provide clean air through a hose connected to a stationary air pump or tank. An SCBA has a portable air tank carried on the back like those worn by scuba divers and firefighters.

Both respirators are very expensive to buy and maintain, and instruction and practice are necessary to use one correctly. Farmers should understand, however, that every time they enter a sealed silo or manure pit without one, they are risking their lives.

Dangerous gases can build up in these areas, creating a lethal, oxygen-deficient atmosphere that can kill, literally, in seconds – faster than anyone can attempt a rescue. Unless you are wearing a supplied-air respirator or have the atmosphere inside the area monitored for dangerous gases, you can never be sure.

Contact an industrial hygienist or your local fire department – perhaps they have a supplied-air respirator you can borrow if you feel you must enter manure pits and silos.