Significant increases in dry matter intake and milk production with increased digestibility were reported in animal trials where forages of higher in vitro digestibility and similar Neutral Detergent Fiber (NDF) concentration were fed.

A faster disappearance of the NDF fraction from the rumen, because of increased rate of digestion or passage, reduces physical fill in the rumen over time and allows greater voluntary feed intake. Thus, digestibility of NDF can influence animal performance independent of dietary NDF concentration.

Accurate and precise predictions of the intrinsic digestion kinetics are critical to the evaluation of animal performance. However, routine incorporation of digestion rates as a standard procedure to calculate the nutritive quality of specific feeds and diets has only recently been achieved.

Over the last few years, extensive work has been carried out to develop an in vitro NDF digestibility assay that is repeatable, has low variability and has the capability of being adopted by commercial laboratories as a wet chemical method for routine forage and feed analysis.

Through neutral detergent chemistry, feed is divided into a soluble fraction that is rapidly and almost completely available, and a fiber fraction that is more slowly and incompletely degraded by microbial enzymes. However, this fiber fraction might contain contaminants, such as starch, protein and ash, that can artificially inflate the concentration of NDF measured.

If an artificially high NDF concentration is measured, for example in feeds with high soil contamination, the diet formulation becomes difficult, especially when balancing to low levels of diet NDF concentration. To overcome these issues, David Mertens published a method that included the option of using alpha-amylase, sodium sulfite and correcting for ash contamination and abbreviated aNDFom.

Nutritionally, this is the most useful approach as it reduces the unwanted variability and contaminants in the measurement of the cell wall material.

Once aNDFom is determined, it can be further fractionated into a pool that is unavailable (uNDF) to microbial degradation in ruminants. The uNDF pool has an important role in contributing to rumen digesta load (physical fill) and cannot support microbial protein synthesis or volatile fatty acid production. Traditionally, this pool was estimated using the formula (Lignin × 2.4)/NDF.

Implementation of this 2.4 factor assumes that the relationship between the measured lignin content and NDF digestibility is always a fixed relationship. However, data generated in our laboratory, and those of others, show that this relationship is not fixed and that long-term fermentations should be preferred to correctly quantify the indigestible cell wall.

The time to reach the extent of fermentation (uNDF pool), in a long-term fermentation, differs between forages (240 hours) and non-forage fiber feeds (120 hours). The development of the uNDF pool is highly influenced by both the stage of maturity and the agronomic conditions (light, heat, water stress, soil type) that interact with plant genetics.

This helps explain why forages, for example corn silage, could be nearly identical in chemical composition but have widely different digestibilities and result in different cow feeding behavior. 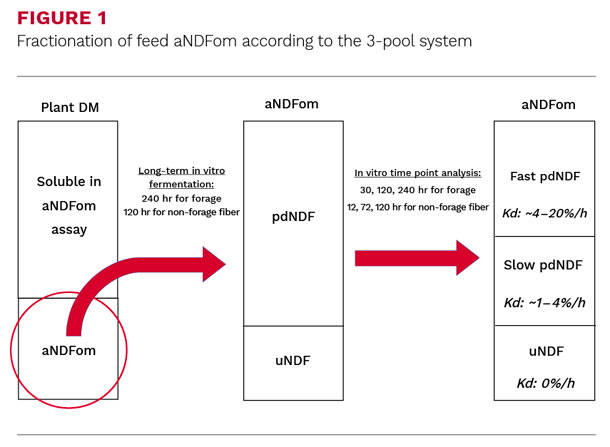 The pdNDF is the pool available for microbial degradation and therefore substrate that can support microbial protein synthesis and volatile fatty acid production.

The next step is to determine the intrinsic rate at which this material can degrade. Intrinsic refers to the plant-governed factors that affect microbial degradation, such as cell wall structure and lignin-associated cross-linking.

To estimate intrinsic rates, the use of in vitro digestion, where residues are analyzed at specific time points, is employed to characterize microbial degradation of the feeds of interest.

As the end point or extent has been determined (240 hours for forages and 120 hours for non-forage fiber feed), it was required to identify the best and least number of time points necessary to accurately predict the rate of degradation of the pdNDF pool, understanding that this procedure needed to be applicable to commercial laboratories.

The digestion time points necessary to capture most of the variation in typical northeastern U.S., temperate forages are 30 hours, 120 hours and 240 hours with a combination of 12 hours, 72 hours and 120 hours yield the highest goodness of fit for non-forage fiber feed.

With these time point combinations, it is possible to predict, by calculating their respective fractional degradation rates and pool sizes, the proportions of fast and slow degrading pools of aNDFom.

This three pool system approach of fast, slow and undigested (Figure 1), should provide nutritionists with better information about the heterogeneity and digestibility of aNDFom and the dynamic nature of the pool sizes that might influence feed intake and energy supply.

It is imperative to note that it is the combination of time points, and not any single time point in isolation, that best predicts and captures the variation concerning aNDFom digestibility and its potential impact on animal performance.

Incorporation in the CNCPS

So far we have described the analysis required to quantify the intrinsic plant factors involved in aNDFom digestion. From this analysis we can determine the size of the fast, slow and undigested aNDFom pools and their respective rates of degradation. Within the construct of the CNCPS, this information is integrated with animal factors such as dry matter intake, passage rate, rumen pH and ammonia levels in a dynamic mechanistic approach.

The latest version of CNCPS 7.0 has the capability to predict rumen pools of fast, slow and undigested aNDFom over time. These calculations are based on the constant battle between degradation and passage out of the rumen. Such an approach can help forward predict the animal response to variable feed quality, such as this years corn silage inventory.

Michael Dineen is a Ph.D. candidate and works in the area of aNDFom digestion and pasture-based systems in the lab of Michael Van Amburgh, who is a Professor of Dairy Nutrition, Physiology and Management at Cornell University.