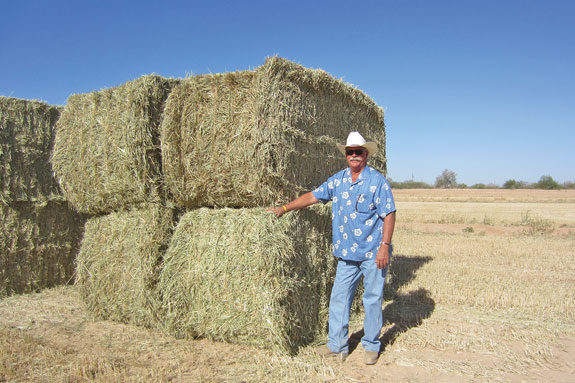 During the 1980s recession, hay prices in Idaho were $30 a ton and “you couldn’t even sell it,” says Richard Larsen, a producer in Dubois, Idaho, “and it cost $50 to grow it. You either had to get in it or get out.”

Alisa Anderson is former Editorial intern with Progressive Publishing and a freelance writer base...

Andy Dobson of Mud Lake, Idaho, had been one of the first in his area to be able to get three cuttings, but at this time he had to find innovative ways to stay afloat.

In 1982, he started shipping hay to an out-of-state market – the dairies in Minnesota and Wisconsin.

Not long afterwards, Dobson became a member of the National Hay Association. As a member, he could connect with horse hay markets on the East Coast where people were willing to pay more.

Larsen did a similar thing to survive. He started shipping hay to Minnesota in the early 1980s, and later to other markets in the east. But in 1986, he felt that his operation had to be even more efficient.

He bought a bale press to increase the volume of what he shipped without increasing the cost of shipping it by rail. Previously, he could only fit 35 to 45 tons of hay in a rail car. With the bale press, they could fit 60 tons of hay on the car.

At that time he also started building a facility in Dubois, where he could pre-shred, compress and ship large amounts of hay. At their peak, they were shipping 110,000 tons of hay per year from that facility, mostly by rail.

Mike Standlee from Eden, Idaho, started his business with $900 in 1981. He bought a truck with the money and started marketing and selling hay back east.

Standlee Hay Company has continued to grow rapidly and now owns 12,000 acres of hay, leases another 6,000 acres and owns a 142,000-square-foot facility in Eden, Idaho.

At the facility they make their hay into large and small compressed bales, cubes and pellets, as well as small-animal food and horse treats.

Soon the company needed a distribution center serviced by rail in Lexington, Kentucky, to meet the demands of their markets. Currently they also have distribution centers in Delaware, Georgia and Florida, and they have markets for their products in every state.

“Our hay company has grown more in the last five years in a down market because we’ve stepped out and taken opportunities where everybody else was kind of in coasting mode because of the economy,” Standlee says.

Some of these recent opportunities have been international markets. The drought in the Middle East and the growing dairy industry in China have been a couple of the opportunities Standlee has used to his advantage.

Larsen and Dobson have also shipped a little hay internationally in recent years, particularly to China, where the hay market is growing.

“We’re very diversified into several different markets. We’ve got enough going on that if one market starts hurting a little bit, our other markets will hold it up a little better,” Standlee says.

While Standlee recommends having diversified markets, he says it’s important to find a niche.

“I think that everybody just needs to find a niche somewhere. Don’t be a copycat. If they find a little niche in the market, I think that’s the biggest key to success.

I think if you’re just a copycat, you’re going to have a tough time surviving. Find a better way of marketing than anyone else has done before,” he says.

But markets and economies change all the time.

“When you find a little niche in the market somewhere, usually your niche is good for three or four years, but then you’ve got to keep being creative and continue finding new niches and push it forward,” Standlee says.

For those wanting to expand their business beyond local markets, Standlee advises putting a marketing plan together.

“I think they just need to do their research, and do it real thorough. Put a plan together, crunch the numbers and make sure the numbers work before you get started,” he says.  FG