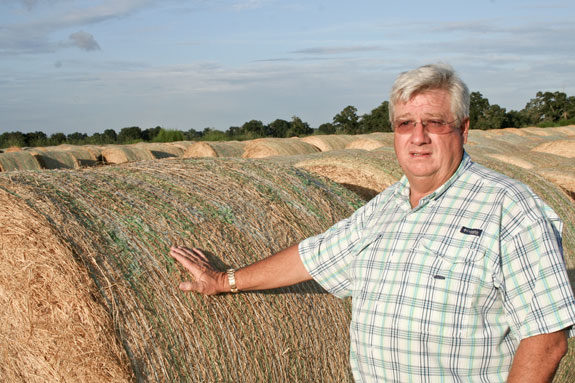 The manure they generate enriches the soil and reduces the amount of commercial fertilizer that must be applied to the fields during hay season.

Manure has always been a key part of the operation’s overall fertility program, owner Don Quincey said in a telephone interview from his ranch in mid-December.

“We try to utilize it for two reasons: It’s good for the soil, and it’s good for our pocketbook,” he said.

About half of the ground is irrigated. His favorite variety is Tifton 85, a warm-season perennial that’s recognized as the highest-quality hybrid among bermudagrasses adapted to Florida. 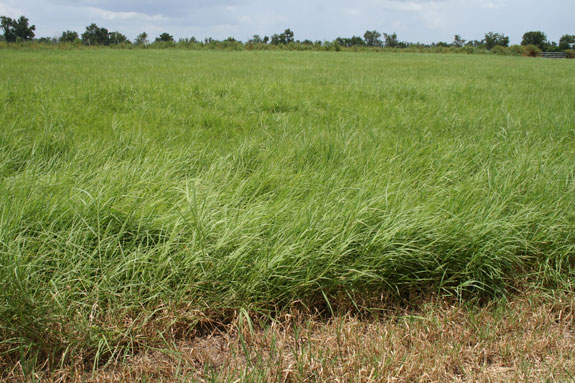 “It’s a very hearty grass,” he said. “It comes on pretty early in the spring and has a very high digestibility, whether we cut it for hay or graze it.”

Quincey tries to produce 7,000 to 10,000 round bales per year. Getting it to cure properly in an area that averages more than 50 inches of rainfall a year can be a challenge.

“We try to get it down below 15 percent moisture before we bale it,” he said.

Other grass varieties grown on the farm include Coastal, Pensacola Bahiagrass and Tifton 79. Tifton 85 beats them all hands-down in both yield and nutritional value, Quincey said.

“A lot of these fields of Tifton 85 will get five cuttings a year and sometimes six,” he said. “The only downside is that it grows really fast and gets big, coarse stems. You have to keep it grazed or cut about every 28 to 32 days.”

A portion of the hay is sold to a local dairy and the rest is fed on the custom cattle operation.

Quincey Cattle Co. has a capacity for about 18,000 head. While the cattle are free to graze the pastures, they’re also fed a concentrated ration as part of the preconditioning program.

The ground right around the feeders takes a beating, producing a few bare spots by late fall and early winter.

Because cattle are continually fertilizing the fields with their manure, little additional commercial fertilizer is required.

“Some pastures we don’t put any fertilizer on at all,” he said.

Some of the farm’s Tifton 85 fields have been in for seven years and are still holding up well.

“We have not had to replace any of it yet,” Quincey said. “I don’t see any sign of it going away from us.”

He tried interseeding some fields with ryegrass, but it competed aggressively with the hybrid bermudagrass in late spring and early summer and hurt his hay production.

Quincey’s efforts to limit commercial fertilizer applications go beyond economics. Like many farms in the Suwannee River Watershed, his farm is comprised of coarse, sandy soils that can easily leach nutrients to the aquifer. His primary concern is nitrogen.

“We have to kind of spoon-feed it a little at a time,” he said. “It can get by the root system pretty fast.”

Several wells on the farm have been tested and so far there’s been no sign of increased nitrate levels.

Farming in such an ecologically sensitive area isn’t easy. The Lower Suwannee National Wildlife Refuge is nearby. Yoana Newman, an agronomist with the University of Florida, has been impressed with Quincey’s efforts.

Quincey has his own herd of Angus-Brahman cattle, but most of the cattle on the farm are custom placements. His busiest time for preconditioning custom cattle is July through December.

Calves enter the preconditioning program weighing anywhere from about 200 pounds to 600 pounds.

The starter ration includes cracked corn from Quincey’s own roller mill, ground hay and cottonseed hulls. Calves stay in the program anywhere from 40 to 60 days.

Some of the smaller calves are put on pasture when they leave, while the heavier calves head to feedlots for finishing. Quincey believes his pasture-based preconditioning program provides a healthier environment for the cattle.

“I believe if we can keep them out of the dust and the mud, we do a lot better. And I think that just giving them space helps,” he said.

Quincey has seen steady growth in his preconditioning business in recent years, and he expects it to continue. With a drought in Texas and herd liquidations occurring around the country, he sees no sign of things slowing down.  FG

Dave Wilkins is a freelance writer based in Twin Falls, Idaho.

MIDDLE: His favorite variety is Tifton 85, a warm-season perennial that’s recognized as the highest-quality hybrid among bermudagrasses adapted to Florida.

BOTTOM: Quincey tries to produce 7,000 to 10,000 round bales per year. Getting it to cure properly in an area that averages more than 50 inches of rainfall a year can be a challenge. Photos courtesy of Yoana Newman