Anibal Ballarotti
Keeping cows in the herd longer equates to additional profits of $150 per cow, per lactation. Increasing the productive life of a dairy cow is achieved through genetic selection, management and a comfortable environment.
Anibal Ballarotti

Let us begin with a review of some definitions:

• Longevity – How long a cow stays in the herd

• Productive life – The time span between first calving and culling

The average dairy cow longevity in the U.S. in the last few decades has been around 4.8 years, a very short longevity considering that the natural lifespan can be up to 20 years old. In this country, cows have a productive life typically around only 2.7 years (USDA), behind New Zealand (4.2 years), the UK (3.9 years), the Netherlands (3.7 years), Poland (3.3 years) and France (3.2 years).

(Figure 1) The main reason for that is probably that cows live longer in countries with grass-based systems. 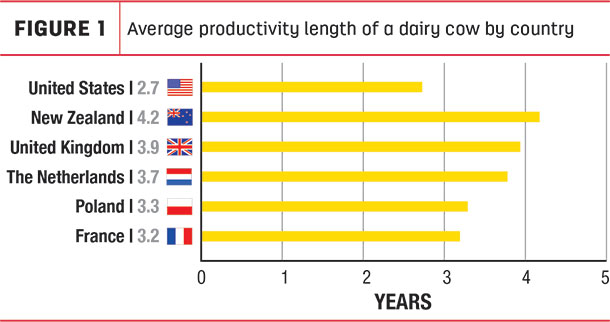 Such conditions often result in lower average milk production per cow per day but with less metabolic diseases than are often seen in cows in confinement systems.

This fact does not mean we cannot find ways to increase this lifespan. In recent decades, the annual culling rate in the U.S. was around 38%, varying from 30% to 40%. This short lifespan (less than five years), short productive life (around three lactations) and relatively high culling rate are primarily a consequence of economic decisions made by dairy farmers based on what they believe to be the low profitability of a given animal, according to the farm’s criteria. These criteria are associated with factors such as status of pregnancy, milk production, transition health issues such as lameness, mastitis, dystocia, ease of calving score and so on.

Over the last decades, dairy cows have been selected to produce increasingly more milk. In practical terms, U.S. producers select cows to achieve their full potential of volume production in the first three lactations, and then they are finished. On the other hand, in countries where cows have higher longevity and higher productive life, several studies show that cows after the third lactation keep or even increase their milk production per lactation.

Following this logic, if we spread a cow’s milk production over total days of her life and, for example, a producer decides to cull a first-lactation cow at around 150 days in milk (DIM), this will not give her a chance to even pay off her raising costs. That is because it typically takes, on average, two lactations before a cow starts to return her investment.

How, then, can we reduce the fixed cost of cow replacement in the herd? Well, if a cow, on average, is replaced between her second and third lactation, we can do that by extending her longevity and productive life in the herd. Keeping that cow healthy in the herd for a longer time will not only pay off her bills but also will make her achieve a full third and maybe a fourth lactation, which are usually more productive than the first two. The profitability for this extra time in the herd corresponds to an increase of around $150 per cow per year. Of course, the math is not that simple in practical terms. We know that around 70% to 80% of the involuntary culled animals are due to health issues such as lameness, mastitis and fertility issues.

However, we should not forget that older cows are more profitable, even if we know they face more health issues intrinsically associated to the confinement system we primarily use in the U.S. What is needed are solutions to mitigate those issues and improve the current system. Two main tools have been identified for that. The first one would be through a better genetic selection for longevity and health traits. The second, but not less important one, would be through improving the management system to provide better cow comfort. By using genomic testing, the producer can predict which animals may leave the herd prematurely due to poor health traits and then select the next generations to have longer productive lives. Yet just choosing certain health traits for next groups of heifers is not an assurance for longer-living and productive cows – but is an important component.

Another important factor producers should consider is the provision of enhanced cow comfort by way of improved management practices. In a previous article, we addressed the basic needs of dairy cows and the simple signs that may indicate they are not being met. We explained in further detail how to achieve those elementary concepts in a dairy operation.

After improving the selection process and providing more comfort to the cows, the dairyman can reasonably expect higher profits by increasing cow longevity and a longer productive life. Additionally, the producer will enjoy a more sustainable operation. The dairy industry has been looking for tools to be more sustainable by reducing greenhouse gases (GHG) produced on farms. Recent Swiss and German research found an association between age of the cows and total methane production. The GHG balance was calculated for each animal based on the milk produced during the experiment and for their entire lifetime production. The results showed that increasing the length of productive life of dairy cows is a feasible way to reduce the climate impact.

This promising information leads us to conclude that higher cow longevity is often related to more profitability. However, without careful management, culling due to poor fertility, high calf mortality or late age at first calving might result in a herd of old, injured and unprofitable cows.

This outcome may be mitigated by the use of tools such as genomic selection and cow comfort to support better animal health traits, welfare and higher productivity. An added bonus is improved public acceptance of the dairy operation as well as a reduction of its environmental impact.