Walt Cooley
For all three days of this year’s show, the weather cooperated nicely and was sunny and beautiful.
Walt Cooley 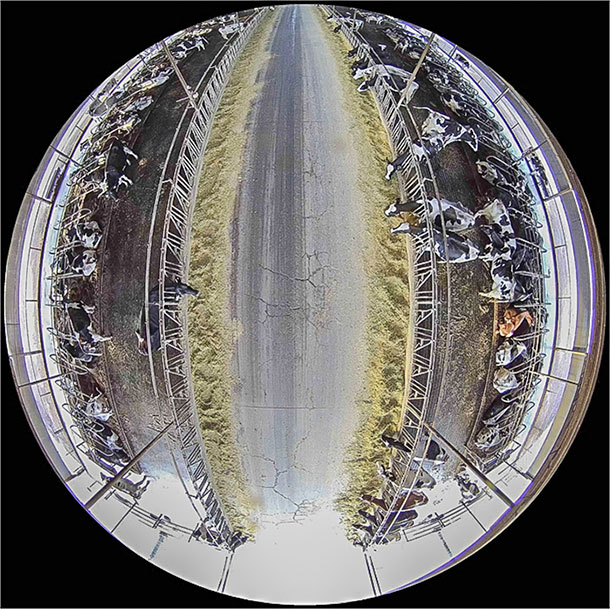 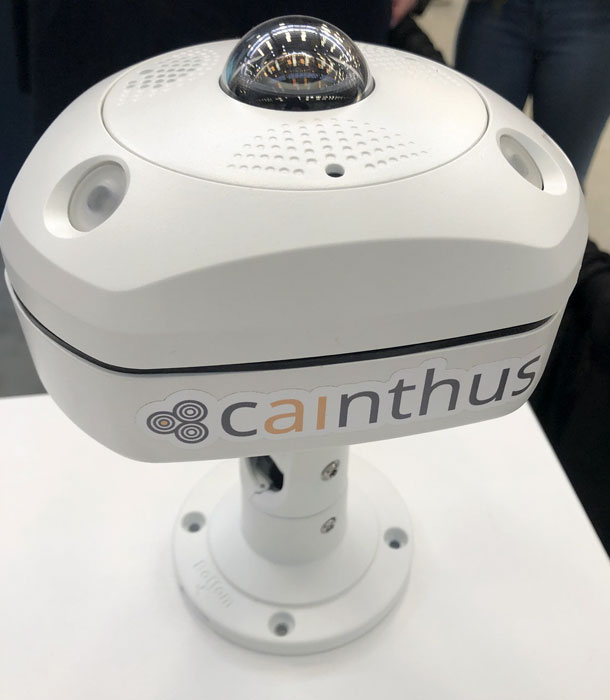 Seeing Cainthus’ new computer vision cameras in person didn’t disappoint. We’ve written about what the company’s computer vision and empty feedbunk notification technology ALUS can do in a previous issue. The really cool stuff is the other potential capabilities that computer vision can do, all from what looks like just a regular security camera. It’s not, of course.

At the show, CEO Aidan Connolly said behavior-related alerts from the company’s technology will be available later this year.

PHOTO: This is an example of what Cainthus’ new computer vision camera sees when installed above a feedbunk. The technology can analyze video images to alert dairies when feed is low or not available to cows in the feedbunk. Photo courtesy of Cainthus.

PHOTO: This is the Cainthus video camera on display at World Dairy Expo. Photo by Walt Cooley. 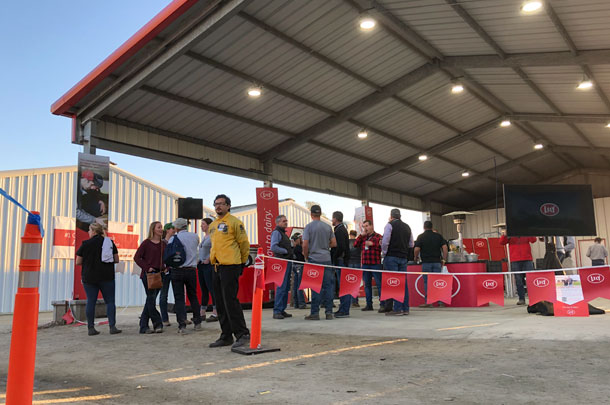 Dairy industry tradeshow marketing showed it was in a state of flux this year. Companies whose booths have been in traditional spaces were downsizing or forgoing the show altogether. The biggest notable change was DeLaval moving out of its outdoor covered pavilion and into a 10-by-10 booth inside the Farm Credit Dairy Center. Its competitor Lely moved into its former pavilion spot.

PHOTO: An after-hours event was held at Lely’s booth at World Ag Expo. Photo by Bellana Putz, courtesy of Lely. 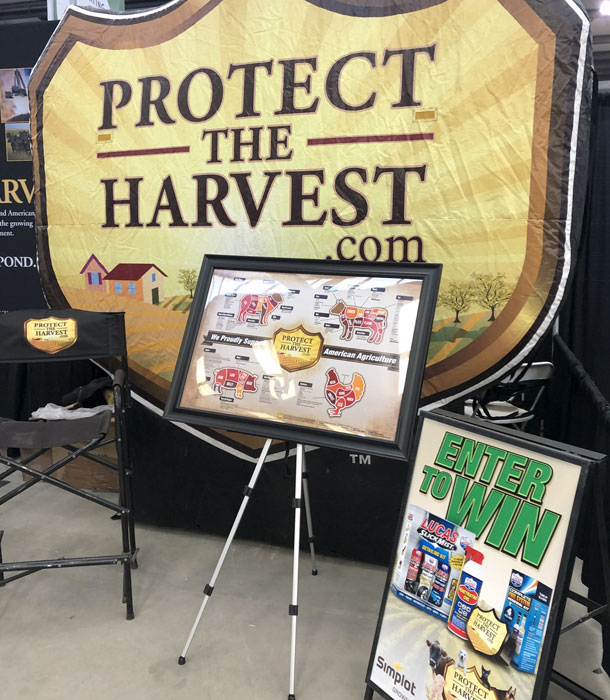 One of those organizations taking advantage of booth availability and shuffling was Protect the Harvest. The nonprofit advocacy organization started by Lucas Oil founder Forrest Lucas was in the Farm Credit Dairy Center for the first time ever this year. (They have been exhibiting at the show for a number of years.) Shawn Burtenshaw, a spokesman for the group and one of its executive board members, said they had received “an amazing reception” this year at the show from dairies. The group advocates in support of agriculture and farmers. In addition to their consumer educational endeavors, the group also lobbies for pro-agriculture issues and donates money to ag-friendly politicians through a separate political action committee (PAC). Burtenshaw said his group hopes to communicate that agriculture and food production should not be a partisan issue.

“These are societal issues. I don’t care what side of the aisle you’re on,” he said.

PHOTO: 2020 was the first year that nonprofit Protect the Harvest exhibited inside the Farm Credit Dairy Center. Photo by Walt Cooley. 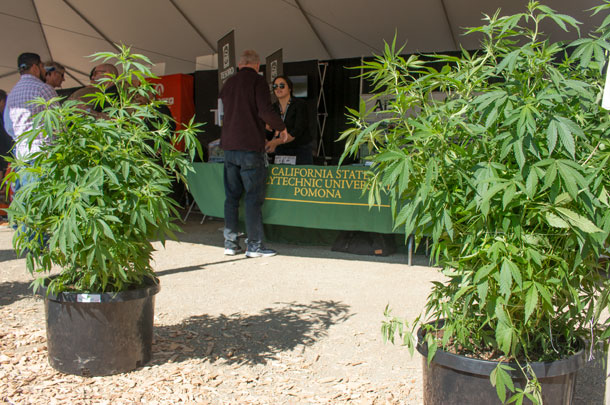 If booth space is any indicator, there was a lot of interest in hemp in California. The show had a specific pavilion set up for several dozen hemp-related exhibitors – from seed genetics companies to equipment handlers to fiber processors. As of 2019, there were more than 511,400 acres of licensed hemp in the U.S. in 34 different states.

Merck Animal Health announced two new products during the show. While the compounds and their intended use are not new to the market, the features of their administration are unique. The company’s new three-way intranasal vaccine against infectious bovine rhinotracheitis (IBR) comes with a unique blue shadow dye for confident administration. As the product is administered into a pregnant cow or calf’s nostril, the blue dye peppers the skin to indicate the vaccination has been administered. The company also announced that its new teat sealant, ShutOut, has been packaged in dry cow tubes in such a way as to make administrations easier. The product’s 4 grams of a sterile, antibiotic-free, intramammary paste containing 2.6 grams of bismuth subnitrate are packaged with less air in the tube to make the product exit the tube sooner and enter the teat with less squeezing of the syringe. The feature is intended to make administration easier for employees when drying off large batches of dry cows. 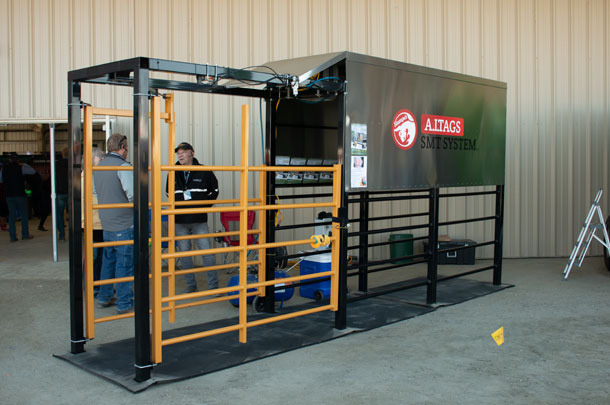 The inventor behind rub-off tailhead tags for use in detecting cows in mounting heat was at the show with a new innovation. Dave Stampe of A.I.Tags brought his new automatic heat detection chute to show off. The covered chute has a pulsating Cognex camera that can detect when the dark-gray, rub-off surface of a tailhead sticker has been fully exposed, revealing a different-colored chevron pattern. A fully exposed tag (when all three chevrons of the pattern underneath the rub-off substance are showing) activates a robotic chute gate to sort the cow out for breeding. Stampe has been working on the innovation for four years. He said the concept could be applied to an existing alley or chute so long as it was at least 10 feet long, blocked out natural light and protected from the elements to protect the camera. The hood over his freestanding chute is necessary to block out natural light and allow the camera to “see” the rubbed-off tags. Stampe is also working to develop smaller stickers that could be placed on a cow’s tailhead that the camera could detect, which would then sort cows out for other reasons besides breeding (i.e., lameness, vet check, etc.).

PHOTO and VIDEO: A.I.Tags’ new automated heat detection chute has a hood to block out natural light and allow a photosensitive camera to “see” evidence of cows being mounted. Photo and video by Walt Cooley.