Bettencourt Dairy has been operating in Jerome and Wendell counties of Idaho since 1982. The farm owns 19 barns housing 50,000 milking cattle in the Magic Valley. At 18 gallons of manure per cow per day, the dairy has great responsibility in handling manure from its cattle.

Policing the manure comes from both within the organization and from agencies that monitor from the outside.

The dairy had a desire to not only stay on top of their nutrient management plan but get ahead of it by reducing phosphorus and nitrates remaining in the waste by as much as 50%-60%, a decision that gives more flexibility in manure handling, storage and application.

In 2015, one facility converted from an open lot system to two 5,000-cow cross-vent scraped barns, enabling them to capture all the manure at one spot. To handle the waste, they tried five different configurations of float screens and water recycling systems, but the nutrient capture capacity they were after never fully materialized. 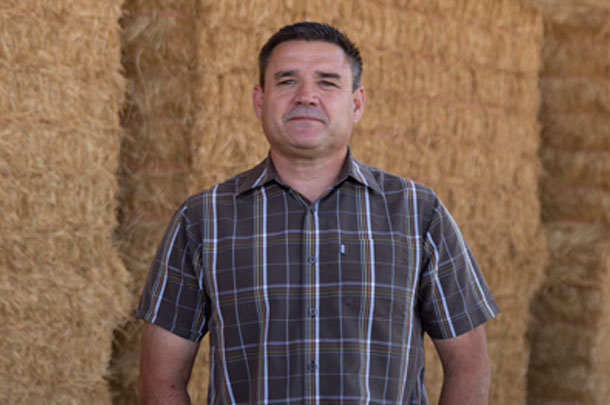 “When we changed the farm, we had to change the manure system. We needed something that could grow and change with the farm,” says Don Brand, operations manager of equipment and buildings for Bettencourt Dairy. “We were sending too much solid into the lagoon.” 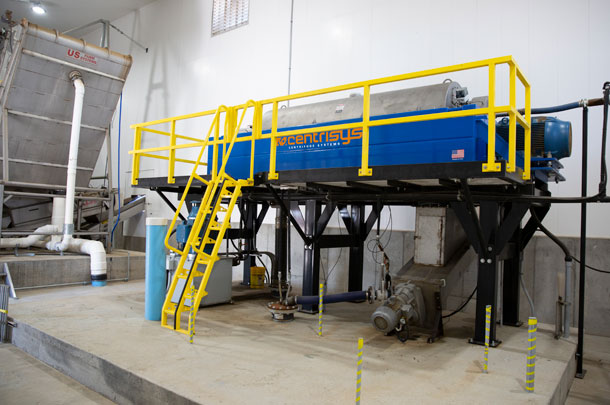 In 2018, a Centrisys CS26-4DT dewatering centrifuge system was added to the manure handling system. The centrifuge takes the solids collected at the two sets of twin floats, removing and separating them from the liquid. About six truckloads of solids are hauled away daily. Without the centrifuge, that same waste stored in the lagoon would require at least 15 slurry truck trips. Phosphorus and nitrate reduction goals are achieved and even exceeded without the use of a chemical interaction, a feature which could be added as conditions and situations change.

A bonus is the higher quality solids collected from the dewatering centrifuge that go straight to the field, yielding a better crop, according to Brand. 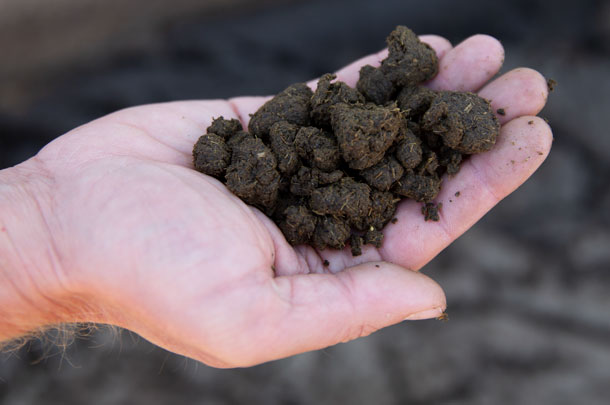 Before installing the dewatering centrifuge, the 200-acre-foot lagoon required annual dredging, removing several feet of solids from the bottom at a cost of approximately $200,000 in man-hours, equipment costs and fuel. By removing the solids more completely before water enters the lagoon, removal can be reduced to every other year and possibly every three years. Brand estimates the pay-back time on the dewatering centrifuge to be about five years, not including the crop benefits. “But we just didn’t look at it in terms of payback time, rather what the system could do to improve the way we handle nutrients,” Brand says. 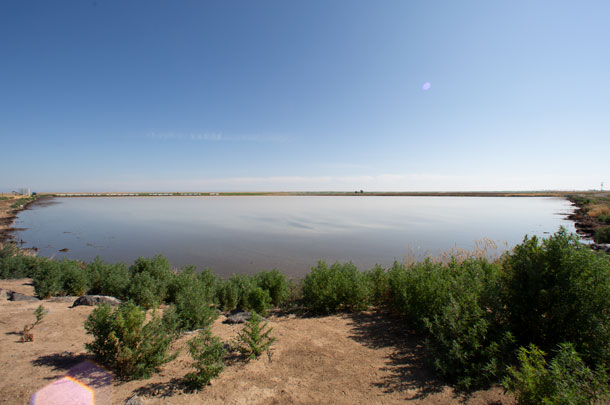 “We are collecting one-third more solids than we were before,” he adds. The centrifuge can handle up to 400 gallons per minute. Currently, all the farm’s manure goes through the system, but it is not able to handle all the farm’s wastewater.

“We installed the first one with a little guesswork because we didn’t know exactly how much runoff and rainwater were running through the system,” Brand says. “Now that we have a better idea, we are adding a second [centrifuge].”

“We did a little research and want to slow down the water and speed up the centrifuge, and we think we can process 100 percent of the farm’s water. The second centrifuge will help us optimize the system, because now it is running full bore all the time,” he says.

President and CEO of Centrisys Corporation, Michael Kopper, designs and builds centrifuges for municipal and industrial water and wastewater from their Kenosha, Wisconsin, headquarters. In 2007, Kopper partnered with Dairy Specialists to install the first system on a Colorado dairy, which removed 60%-70% of the phosphates and nitrates from the manure waste. Solids and wastewater were then correctly managed to be ground applied. “That initial centrifuge was very similar to what they use in the municipal industry,” Kopper says. “Based on that result, we have learned a lot. We learned that dairy manure is much more abrasive, so we optimized the DT dewatering centrifuge specifically for dairy manure and strengthened our decanter centrifuge to resist wear caused by abrasion.”

“We have moved along over the years. It is designed to remove phosphates and has improved wear protection specific for dairy manure to reduce operation costs,” he adds.

Brand says the system worked as promised from the beginning. “The fact that it wears the U.S. flag helps, too,” he adds.

Kopper says by separating solids from liquids, accumulation of soil phosphates can be slowed. “Phosphates have to be reduced if we want to maintain our environment,” he says. “That’s the main reason why the centrifuge is active; it controls the amount of phosphates. We then manage what and when it’s being put on the field and runoff can be controlled.” 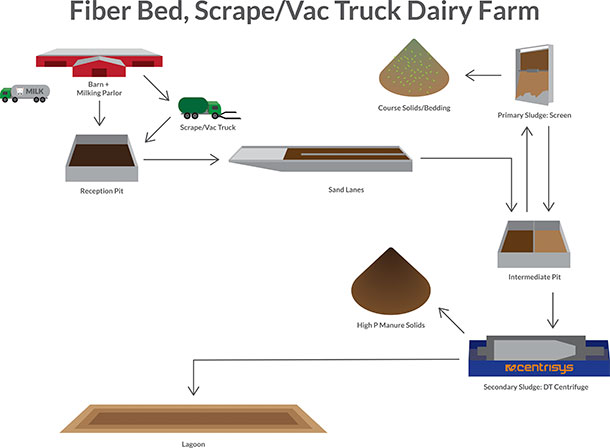 Required infrastructure includes a building to house the dewatering centrifuge and pumps that can handle 400 gallons per minute.

Brand says the system is adaptable to change as the farm’s needs change. One potential tweak to the system is the addition of a digestor to capture energy and return it to operate the dairy. However, Brand says that just like on every farm, all planned changes to the operation are subject to change.

PHOTO 1: The conveyor on the left carries the additional solids removed by the dewatering centrifuge after the two slope screens remove the larger, coarser solids (the pile to the right).

PHOTO 3: Without added chemicals, this dewatering centrifuge removes additional solids that are too fine for the slope screens to capture, typically leaving less than 1% total suspended solids in the effluent manure that previously went into the lagoons.

PHOTO 4: The residual manure solids from the dewatering centrifuge is 25% total solids and is resold as compost fertilizer.

PHOTO 5: With the removal of the additional fine particles by the dewatering centrifuge, Bettencourt Dairy now only dredges the 204-acre-foot (66.5 million gallon or 1/4 -by-1/4 mile in area) waste lagoon once every two to three years.