Innovation and inspiration filled the two-day event, held Jan. 22-23, at the Monona Terrace in Madison, Wisconsin.

Five speakers graced the main stage, including Dr. Kate Darling, a leading expert in robot ethics. “We want to look for technologies that help people do a better job instead of just replacing humans,” said Darling, a researcher at Massachusetts Institute of Technology Media Lab. “It’s important that these technologies help farmers free up their time to complete other tasks that will always require human abilities.”

Also with an eye for the future, Brett Sciotto, CEO of Aimpoint Research, profiled the farmers of 2040, predicting characteristics of those who will be in production agriculture 20 years from now. He identified the “independent elite” and “enterprise business builders” as the segments who are most innovative, adaptive, open to change, optimistic and positioned to grow and progress despite difficult economics.

“The enterprising business builders don’t wait to be told what to do,” Sciotto said. “Nearly two-thirds of these operations grew despite the struggles of the last five years.”

Marin Bozic, University of Minnesota dairy economist, provided an overview of how milk production and dairy trade are impacting dairy markets, noting “2020 is shaping up to be a good year.”

The audience also picked up tips from author, speaker and entrepreneur Michael Parrish DuDell on how to interact and engage with the millennial generation. He acknowledged the “pre-adult” phase, a period of transition between adolescent and adult roles that now commonly lasts through a person’s 20s, as a specific consideration when working with millennials. “We are entering an entirely new life phase that’s being created right now in this generation,” he said. “But it’s not necessarily generational, and it’s not going to just live and die with us. It’s going to become part of our infrastructure.”

And rounding out the inspiring stories was that of Col. Nicole Malachanowski, a pioneer in female aviation who also overcame great odds following a neurological tick-borne illness. She applied these concepts to dairy farming. “I learned risk is required for growth and positive change,” she said. “We can’t censor our strengths.”

Outside of the main sessions, attendees visited a trade show and had their options of listening to sessions themed around dairy supply chain management, economic opportunities and dairy versus plant-based milks. The Innovation Stage featured 10 different presenters, on topics ranging from paired calf housing to energy efficiency, while several companies hosted in-booth presentations as well. 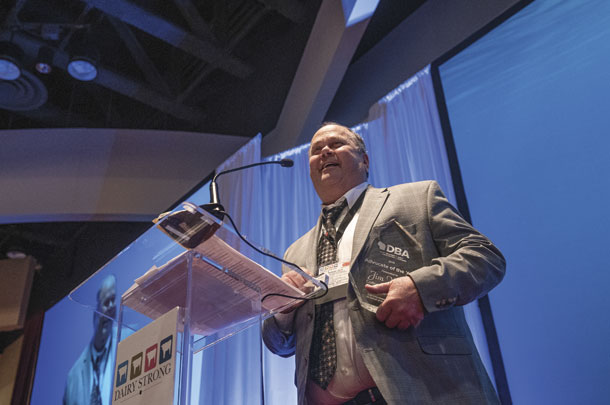 Jim Winn of Cottonwood Dairy in South Wayne, Wisconsin, was recognized by the Dairy Business Association as the “Advocate of the Year” award winner. Among his many acts of service and leadership in his local community and for the dairy industry at large are the annual Day at the Dairy, by which he collaborates with other farms to draw hundreds of elementary school students to visit his dairy, to his leadership in helping to form the Lafayette Ag Stewardship Alliance, a farmer-led group focused on protecting and improving water quality.

Members of the Dairy Business Association re-elected three members to fill open positions on its board of directors. Amy Penterman from Dutch Dairy in Thorp will serve as DBA’s president-elect. Lee Kinnard, who owns and operates Kinnard Farms in Casco with his family, is the group’s secretary. Also re-elected was Jack Hippen, North America manager for STgenetics. 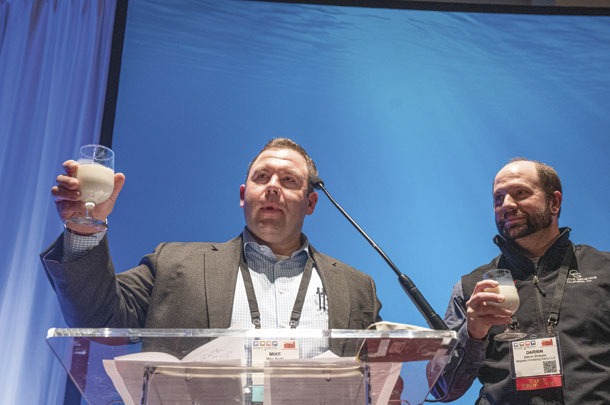 A dairy farmer from Hatley was elected by members of Edge Dairy Farmer Cooperative to its board of directors at the co-op’s annual business meeting.

Heidi Fischer of Fischer-Clark Dairy Farm will serve three years on the board in a position that had been open. Fischer works on her farm in north-central Wisconsin with her husband, John, and his parents, Mike and Sue. She manages the cows and calves.

PHOTO 1: Marin Bozic shared his outlook on dairy markets in 2020.

PHOTO 2: Dairyman Jim Winn of Cottonwood Dairy received the DBA Advocate of the Year Award for his ongoing leadership and resilience.

PHOTO 3: Mike North (left) led a milk toast in honor of the late dairyman and advocate Dean Strauss. He was joined on stage by Dean’s brother Darin Strauss. Photos courtesy of Dairy Strong.