Nationally, year-over-year production growth at less than 1% was extended for a third consecutive month. In the 24 major dairy states, growth surpassed 1% for the first time since last October.

Reviewing the USDA preliminary estimates for January 2020 compared to January 2019:

Cow numbers have been a bit of a moving target of late. The USDA report revised previous estimates higher for all months going back to September 2019. And, January 2020 cow numbers jumped 5,000 head from December 2019.

Most of the growth in cow numbers has been concentrated in four states – Texas, Idaho, Colorado and New Mexico, up a combined 73,000 head from a year earlier (Table 1). There were also modest gains in Kansas, South Dakota, Michigan, Washington and Oregon, up a combined 16,000 head. In contrast, cow numbers declined in a dozen major states, with Pennsylvania, Arizona and Wisconsin down a combined 41,000 head. 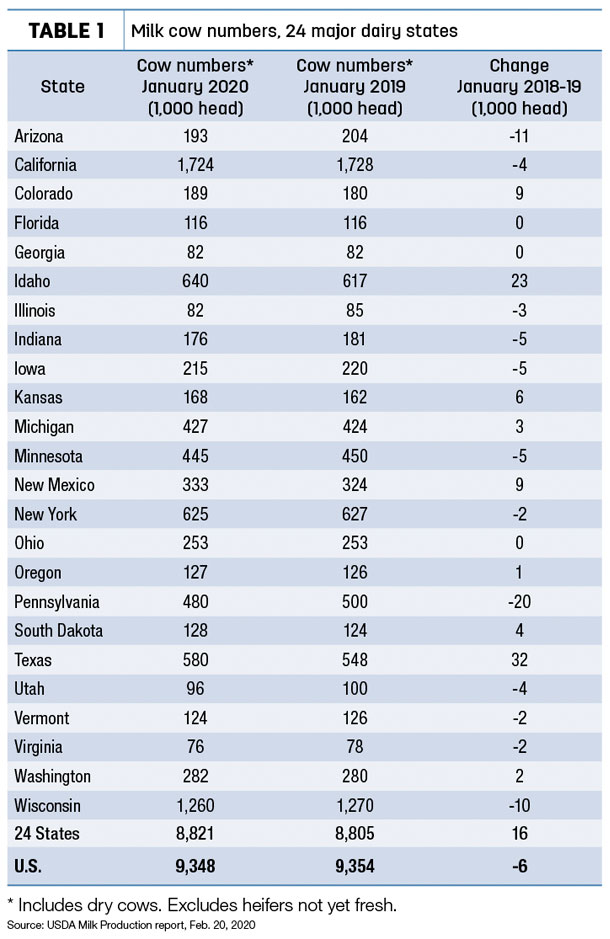 Compared to a month earlier, producers in Idaho added 5,000 cows, with New Mexico up 3,000 head. Producers in Pennsylvania and Wisconsin reduced herds by 3,000 and 2,000 head, respectively.

Milk per cow picks up a little

Cows in 16 states yielded higher milk output per cow in January compared to the same month a year earlier (Table 2). Biggest gains were in Virginia (up 75 pounds), Arizona and Pennsylvania (both up 60 pounds), and New York and Ohio (both up 50 pounds). 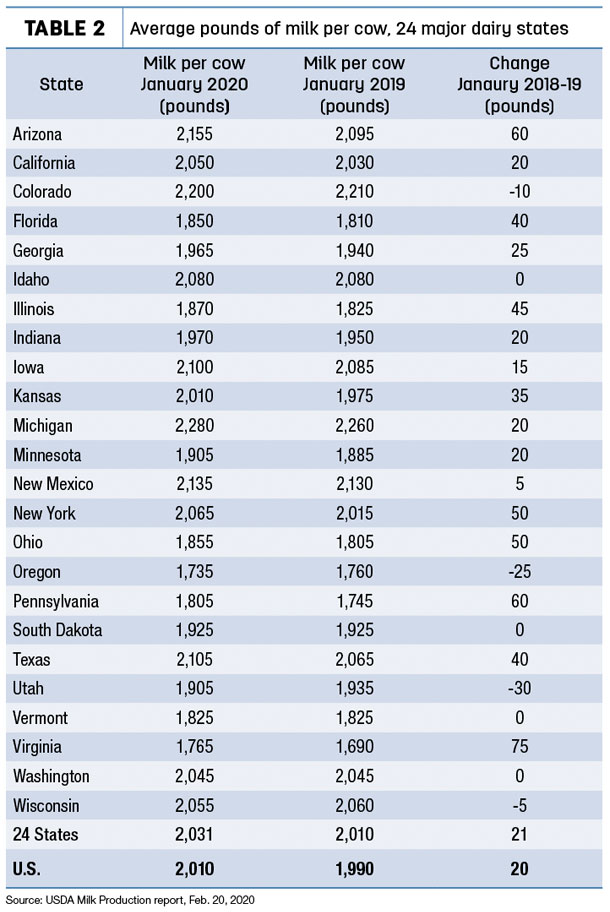 Compared to a year earlier, production per cow declined in just four states: 30 pounds in Utah, 25 pounds in Oregon, 10 pounds in Colorado and 5 pounds in Wisconsin.

At 2,280 pounds, Michigan continued to be the national leader in milk output per cow on a monthly basis, followed by Colorado, Arizona, New Mexico and Texas.

Among all major states, Texas led in terms of milk volume and percentage growth in January 2020, up 89 million pounds (7.9%) from a year earlier.

Progressive Dairy’s annual dairy statistics poster with full state, regional and national analysis of 2019 milk production, cow numbers and milk output per cow will be available in the April 1, 2020, issue of the magazine.

While earlier forecasts had seen a brighter milk price outlook for 2020, the coronavirus outbreak in China has cast some uncertainty on dairy trade and the world economy, and milk futures prices have fallen, notes Bob Cropp, dairy economics professor emeritus at the University of Wisconsin – Madison.

Writing in his monthly dairy situation and outlook report, Cropp said Class III milk futures were in the strong $17s per hundredweight (cwt) range for the first half of 2020, reaching the $18s the second half. However, as of Feb. 25, Class III milk futures prices were below $17 per cwt until June, and only reach about $17.29 per cwt for a high September and October before falling back to under $17.10 per cwt by December.

The USDA’s lower price forecast is partially based on a relatively strong increase in milk production in the year ahead. Milk production is forecast to rise about 1.7% in 2020, in part to it being a leap year. Adjusted for the extra February day, production would be up 1.4%.

“This is still a lot of milk considering milk production was more than adequate to meet needs last year,” Cropp said.

Cropp remains optimistic that milk prices have a high probability of doing better than the current USDA and futures projections.

The USDA estimates the average number of milk cows for 2020 at just 3,000 head higher than 2019. This seems reasonable, in Cropp’s view, considering the inventory of dairy replacement heifers as of Jan. 1, 2020, was 1% lower than a year ago with replacements per 100 cows the lowest since January 2014. The number of replacements expected calve during the next 12 months was also 1% lower. Dairy cattle slaughter has been running about 2% higher than a year ago.

While the USDA projects milk production per cow increasing about 1.4% in 2020 (after the leap day adjustment), lower-quality forages being fed until a new crop is harvested this spring and early summer should slow the increase to 1%-1.2%, Cropp forecast. Because of the feed factor, he doesn’t anticipate a strong flush.

“We can also expect with the financial impact of four and one-half years of low milk prices there will be a relatively high number of dairy farmers exiting this year,” Cropp said.

“If the spring flush is not strong, I could still see cheese prices recovering by late spring with continued improvement through fourth quarter,” Cropp said. “Class III could still be in the mid-17s by second quarter, the higher $17s in the third quarter, reach the $18s in the fourth quarter and average near $18, or near a $1 higher than 2019. But, a lot of uncertainty exists, and a lot can happen between now and year’s end.”