How to manage footbaths in a robot milking facility

Nigel B. Cook
Walking cows through a footbath containing an antibacterial agent, such as copper sulfate or formalin, has become an industry standard practice to aid in the control of infectious hoof disease. In conventional parlor-milked herds, the footbath is typically located in the return lane from the milking center, and the majority of herds use the bath about four times per week.
Nigel B. Cook

Coupled with efforts to improve hygiene, treatment of active lesions topically as soon as they occur and the delivery of trace minerals targeting improvements to the integrity of the skin, particularly in heifers, we have seen significant improvements in the control of digital dermatitis (heel wart) and foot rot over the last few years. Research has also shown us that the ideal footbath is 10 to 12 feet long to ensure that the rear feet receive at least two immersions in the footbath solution as the cow passes through.

Two recent studies have highlighted that lameness is a significant problem in automated milking system units – with both studies pointing to a lameness prevalence of around 25%. One of the reasons we may be seeing this high rate of lameness is poor footbath management. In a survey of automated milking system units in the Upper Midwest, workers at the University of Minnesota found that only 70% of herds used a footbath at all and, of those that did, only a quarter used the bath three or more times per week.

This is in stark contrast to the use rate and frequency in conventional herds, as well as our best practice recommendations. Coupled with leg hygiene issues from the use of automatic scrapers, this is a significant step backward in hoof health management and one that automated milking system units cannot afford to tolerate – lame cows have fewer visits to the robot, milk less and are at twice the risk of being fetched than non-lame cows, creating more work for caregivers.

A significant issue with automated milking system unit design is the problem of where to put the footbath. All too frequently, the footbath is forgotten about in the layout of the pens during the design phase, and placement becomes an afterthought once the design is complete. For the majority of side, L-shape and cross-way installations, the default is to put the footbath in one of the pen crossovers, usually at the end of the pen farthest from the robots. The idea is that on bedding day, the cows can be moved around the pen between the feed and stall alleys and be bathed at that time. We believe this option is deeply flawed for three main reasons:

1. First, having to turn at a right angle into a bath is not well tolerated by cows, especially heifers, with subsequent stress and slipping, making the task unpleasant for everyone involved. Baths should ideally create a leader-follower scenario when a group of cows must pass through a bath, where the cow behind can easily follow the cow in front in a straight line. 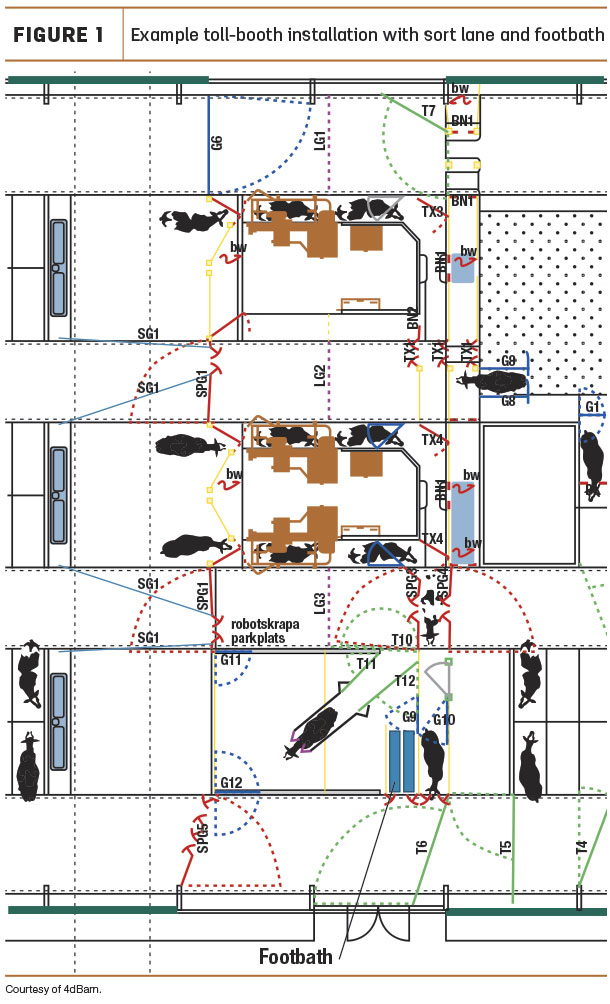 2. Second, the majority of herds only add stall bedding once a week, maybe twice. Even if they chose to footbathe the cows every time, the frequency would be insufficient to achieve good control during risk periods. We know how busy things get on the farm, and it is easy to skip the footbath and just bed the cows when time pressure is a problem.

3. Third, putting the footbath at the far end of the pen, away from the main activity area for workers, makes filling and operating the bath an onerous chore, increasing work time and making the task one that is easily skipped. If baths are not emptied and cleaned, they rapidly become manure baths; thus, location and ease of management is important. 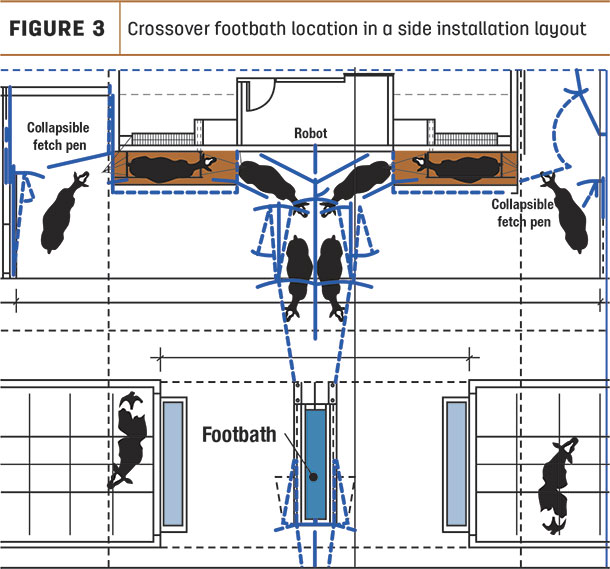 Given these issues, we have seen producers put baths in crossovers and hope that cows pass through them voluntarily over the course of several days of use. We’re pretty sure this is not an effective solution either, as many cows will choose an alternative route, avoiding the bath altogether.

The goal for automated milking system design should be for cows to be selected to pass through the footbath as they exit the robots, using a sort gate that routes them to an alternative lane used only for those cows that need to be bathed, while allowing the rest of the herd to exit through the main lane and return to the pen of origin. This goal is very hard to achieve in side, L-shape and cross-way installations, which points us toward alternative layouts that can accommodate this choice scenario.

The most common layout to achieve this goal is the tollbooth layout. Cows are directed down a rear exit lane, 41 inches wide, after milking and, from that lane, a two-way gate can sort them back to the pen or direct them through a lane with a footbath. With this layout, a single footbath can serve multiple robots.

One recent advance from the basic tollbooth layout is the herringbone design developed by 4dbarn from Finland. The robots are located at an angle with the exit pointing toward the feedbunk. Often, cows will go directly to the feedbunk after milking and then rejoin the main group after a meal. By gating off the feed lane, cows can be selected through a footbath on their return, with the bath located adjacent to the robots or at the end of the stall platform adjacent to the crossover. Both these designs can work with free-flow and guided-flow systems. 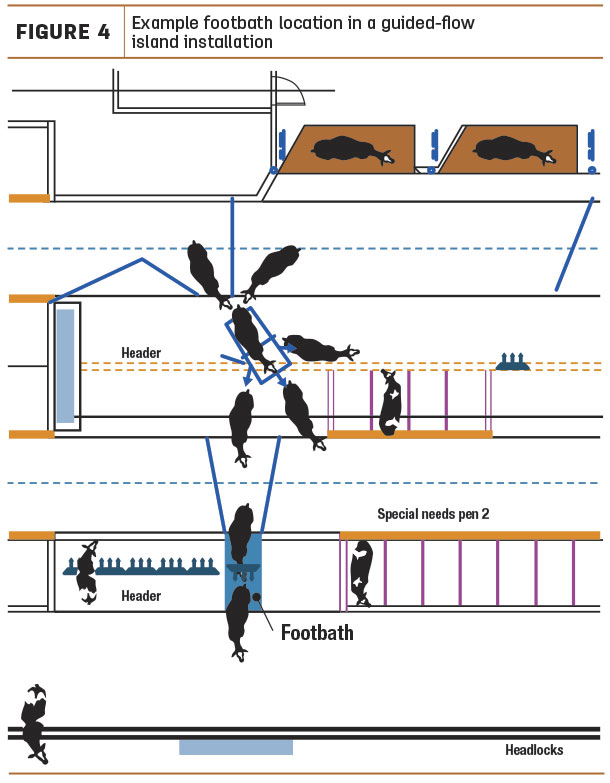 Footbaths in side or island installations are a little bit more challenging. Footbaths with these layouts are often associated with guided-flow or semi-guided-flow systems, with the area in front of the robots closed off with finger gates and a sort gate employed at the exit from the commitment pen. The sort gate can allow cows to return to the pen or direct them through a footbath lane. Side installations that are free-flow with only one robot per pen can utilize an exit lane linked to a footbath in the crossover, but this layout precludes expansion of the pen and the addition of more robots.

Because lameness is becoming such an issue for automated milking system units, we think footbath design and location should be a priority during the planning process, not an after-thought. Infectious hoof disease can be devastating to any herd, and we have worked hard to find ways to control it. Using a footbath is a priority for automated milking system units, and we hope this article gives you some ideas on how to best implement their use on your farm.

Nigel Cook is currently chair of the Department of Medical Sciences at the University of Wisconsin – Madison School of Veterinary Medicine and manages the Dairyland Initiative.