Dave Natzke and Walt Cooley
Many attendees at Western Dairy Management Conference experienced delayed flights or a bumpy ride into Reno, Nevada, for the 14th edition of the biennial event.
Dave Natzke

High wind advisories grounded many flights or made landings uncomfortable at the Reno-Tahoe International Airport. However, more than 1,500 were anticipated to participate in the event. What follows are highlights from Progressive Dairyman Editors Dave Natzke and Walt Cooley, who attended.

A farmer with no arms or legs

Canadian farmer Chris Koch opened the conference with a witty motivational speech. Koch was born without arms or legs and yet has found it possible to do what he loves – farm. 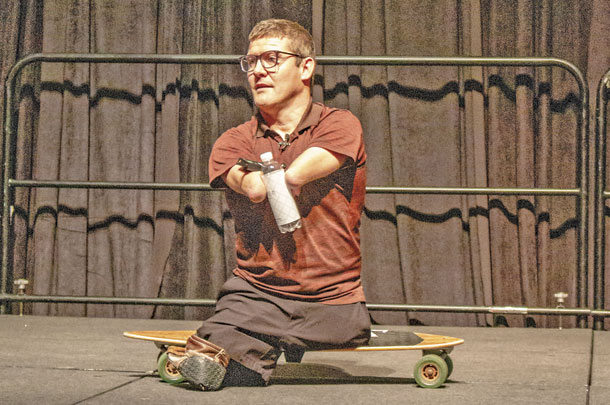 “I love that farming is a job people don’t expect a man with no arms and no legs to be doing,” Koch said. “I hope that my message encourages people to raise the bar of what’s possible in their own lives.”

At 3 feet 6 inches tall, he hopped up the stairs to the stage and then cruised to the center of the platform on a long board he uses to get around. He showed the audience videos of how he makes do with the movement he does have to do chores. For example, he can drive a tractor (sometimes with the aid of a 2-by-4 if the tractor has a manual clutch) and take notes to stay organized (writing with a pen in his mouth).

He explained there is no known reason why he was born the way he is, but that he has tried to make the most of life by focusing on being grateful for what he does have and remaining positive.

“We’re all going through stuff,” Koch said. “When you’re in the valleys of your life, learn as much as you can from them.”

He challenged the dairy producer audience to force themselves out of their comfort zones because he said life will do that to you anyway, so when it does it won’t feel so uncomfortable. He cautioned them to be “far more afraid of regret than failure.”

“I don’t want my presentation to say, ‘You have arms and legs, so you have no excuse.’ I want to challenge you to make the most of every day you have on earth.”

Interest in milking with robots is high

Most of the major milking equipment companies made a presentation during the pre-conference session of the event. Lely’s company representative Dan Meihak reported during his presentation that the company has robots installed on 217 dairy farms as of 2019, but that there are 350-plus sales prospects, nearly twice the number of farms with interest as those currently installed.

A consensus among sources Progressive Dairyman talked with indicated many of those considering robotics are ready to pull the trigger when milk prices increase or their milk processors indicate a demand for more milk. Those economic challenges have had a huge impact on how quickly farms can adopt robotic milking technology, Mike Brouk from Kansas State University said in his presentation.

“If you don’t remember one other thing from my presentation, it is this: The cow produces the milk. The robot only harvests milk. The robot does not produce milk. If you are going into this thinking, ‘I’m going to get another 10 pounds of milk.’ Where is that milk coming from? It’s got to come from the cow. If you’re doing a robotic install, basically what you are saying is: ‘There are things I’m doing on my farm today I’m going to do differently because I’m going to install a robot.’ Be careful. Make sure there are things you are going to do differently.”

Brouk recently completed a sabbatical studying robotic milking. In his opinion, the technology is “ready for the industry today.”

“The short story is: When looking at robotic milking boxes, if you’re not willing to manage cow behavior and all the things that go with that, the economics may not work out the way you think they will,” Brouk cautioned. “The key is to look at the milk you’re going to harvest per robot every day.”

High-producing dairy cows generate a lot of milk and a lot of internal heat.

“Heat production by the cow itself is often overlooked as a predisposing factor in her ability to deal with heat stress,” said Robert Collier with the University of Arizona. “The highest-producing cows, because of their very high internal heat load, are the ones having the most trouble dissipating that heat load when they get exposed to additional thermal stress.”

“The long-term impact of that on the animal is two to three times greater than the impact of climate change,” Collier said. “We need to pay attention to the level of heat production we’re getting in cows with the high levels of milk yield.”

With restrictions and costs of water and energy to cool cows, dairy producers must begin to think about more passive ways to control heat stress – including the ability of the cow to cool itself. Among those ways showing potential are through genetics to improve heat loss through evaporation.

While shaving cows has shown to double the evaporation rate of cows, selecting cattle with the “slick” hair gene has proven to aid evaporation. Producers may also be able to select cattle with more hair follicles, which are directly linked to the number of sweat glands in a cow.

Beyond genetics, increasing air flow over the skin surface will increase evaporation. There is also research regarding nutritional changes to increase sweating.

With the recognition that high milk production is linked to high internal heat production, cows attempt to cool themselves by producing less milk. An initial action runs counter to conventional wisdom in dealing with heat stress – they drink less water.

Mike Hutjens, University of Illinois dairy nutritionist, warned that taking feed additives out of the dairy ration due to a fourth year of modestly low milk prices and pressure from lenders to further reduce costs is a risky management decision.

“Even at $16 (per hundredweight) milk, feed additives can be effective and economical to enhance performance of your cows,” Hutjens said, citing benefits to milk production and herd health.

Hutjens said he continues to recommend six feed additive classes for lactating cows: Rumensin, silage inoculants, organic trace minerals, yeast and yeast cultures, sodium bicarb/sodium carbonate and Biotin. The recommendations change somewhat for close-up dry cows and fresh cows. Dairy producers should work with their nutritionists to decide if all six are necessary in their rations.

With new technologies, he urged producers to ask for research results and enquire about the form and protections (coatings).

Despite the cost, Hutjens’ feed additives will become even more important for other factors: The declining use of antibiotics will mean additives will play a larger role in maintaining herd health, and increased environmental regulation will boost the need and use of feed additives designed to reduce methane emissions.

Duarte Diaz, dairy scientist at the University of Arizona, said new technology is making rapid advancements for dairy herd and farm management. In his experience, however, once purchased, new technology is the most underutilized management tool on a dairy. Part of the challenge is: A lot of dairy technology is not integrated or may not be easily interpreted by people using it.

Using an analogy of the transportation industry, Diaz compared two common “dashboards” – one in an automobile and the other in an airplane. The automobile’s dashboard is simple with only a few readouts because the driver must pay more attention to the road, requiring less information to get from Point A to Point B. The airplane dashboard is far more complex and used more frequently as a checkpoint.

Diaz said dairy producers primarily use technology as an automobile dashboard when they should be using it as an airplane dashboard, but those dashboards should be simplified to make them more useful to the people actually managing the herd.

Turning attention to video cameras, Diaz provided a map of an example dairy farm, suggesting places where placement of video cameras might be most useful. Three primary uses of cameras are to observe activities in real time, record and time-stamp activities and combine with adaptive software to aid in management decisions.

Cameras and video are becoming very inexpensive and can be useful for monitoring animals, tracking employees and protocols, identification of teachable moments or operation bottlenecks as well as watching for potential abuse of animals and other employees and sabotage. However, Diaz warned producers to consult with an attorney regarding video and audio recording of employees before placing cameras.

Alison Van Eenennaam, animal biotechnology and genomics specialist at the University of California – Davis, discussed how efforts used by social activists opposed to technological advancement often run counter to their own end goals, especially as they pertain to sustainability.

Eenennaam cited past technological advancements in plant and animal breeding that have increased production, shrinking the carbon footprint and environmental impact per unit of food production.

She urged producers and others to “reframe” the discussion, highlighting the trade-offs of failing to adopt a new technology. She also called for more sensible regulation of new technology, including gene editing.

In the absence of sensible regulation of technologies to produce safe food, research exploring the introduction of sustainability traits like disease resistance, climate adaptability and animal welfare into U.S. livestock breeding programs will be thwarted, harming American agriculture and food production.

PHOTO 2: Chris Koch, a Canadian farmer and motivational speaker, challenged attendees at Western Dairy Management Conference to make the most of every day, despite their individual challenges.  Photos by Walt Cooley.