Dave Natzke
For the first time since 2013-14, the size of the U.S. dairy herd started a new year with fewer cows and heifers than the year before. The downturn is due to heavy cull cow slaughter and a small decline in replacement heifers.
Dave Natzke

The number of dairy replacement heifers weighing more than 500 pounds were estimated at 4.072 million head, down about 66,800 head from a year ago. 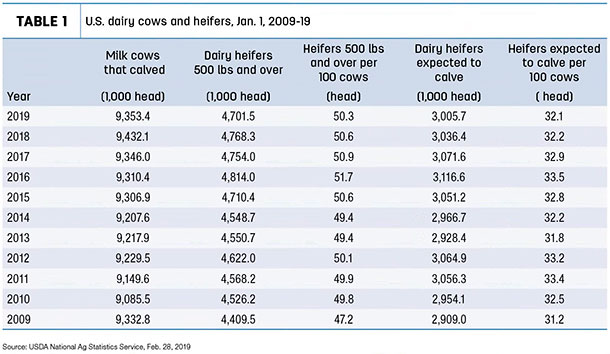 USDA’s semiannual report, delayed due to the partial government shutdown, includes survey-based estimates of U.S. dairy cows, replacement heifers and heifers expected to calve within the next year. The report includes both beef and dairy cattle inventory estimates based on January 2019 surveys of about 36,000 livestock operations across the U.S.

In the continental U.S., highest average prices were New Mexico, Oregon, Arizona, Texas, Colorado and Kansas, all at $1,500 or higher. Lowest prices were Missouri and Kentucky at $1,150 and $1,180, respectively.

The USDA estimates are based on an annual survey (February) in all states, according to Mike Miller with USDA’s National Ag Statistics Service. The USDA also reports results of quarterly (January, April, July and October) dairy farmer surveys in 23 major dairy states.

The prices reflect those paid or received for cows that have had at least one calf and are sold for replacement purposes, not as cull cows. The report does not summarize auction market prices.

Monthly dairy cull cow slaughter continued at a high pace to start 2019. Federally inspected milk cow slaughter was estimated at 298,400 head in January, the highest total for any month since December 1986.

Regionally, January 2019 dairy cow culling topped 72,200 head in an area including Illinois, Indiana, Michigan, Minnesota, Ohio and Wisconsin, and was about 70,100 head in Arizona, California, Hawaii and Nevada.