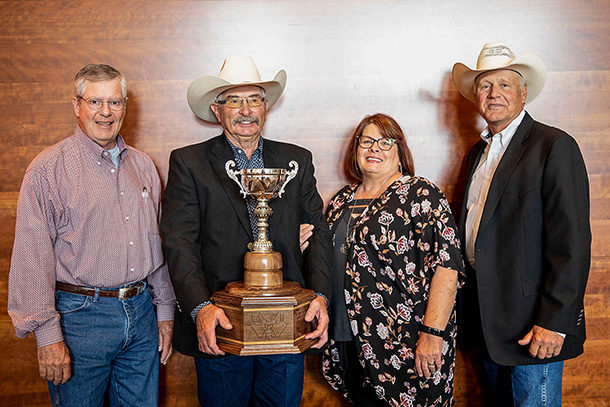 This national award is presented annually to a producer to recognize their dedication to improving the beef industry at the seedstock level.

Cow Camp Ranch is located on the western edge of the Flint Hills near Lost Springs, Kansas, just off the old Santa Fe Trail. The Brunner family has been farming and ranching since the early 1890s and now is in its fifth generation of operation on some of the same land.

The registered cow herd was founded in 1969 by Kent Brunner, using some of the original Simmental genetics that were imported into the U.S. Soon after, Cow Camp Ranch became an early member of the American Simmental Association (ASA). Today, the ranch is managed by Kent and his son, Nolan.

The cow herd consists of 800 registered Simmental, Sim-Angus and Angus cows that are managed on native Flint Hills grass year-round. Crossbreeding is utilized to maximize the genetic potential of both the Simmental and Angus breeds. About 300 embryos are transferred every year, with the balance of the cow herd and replacement heifers artificially inseminated.

The Brunner family markets around 250 head of bulls each year, with the majority being sold through their annual spring bull sale held the first Friday in February. A select group of females are also marketed at the time, with the balance sold private treaty.

In addition to the seedstock operation, the Brunner family owns and operates a 9,000-head commercial feedyard, managed by Kent’s brothers, Mark and Tracy Brunner. The entire Brunner family operation consists of 15,000 owned and leased acres, a large portion of which is native Flint Hills grazing lands. The remaining acres are devoted to hay and crop production. Cow Camp Ranch was nominated by the Kansas Livestock Association.

For more information about this year’s symposium, including additional award winners and coverage of meeting and tours, visit the Beef Improvement Federation website.