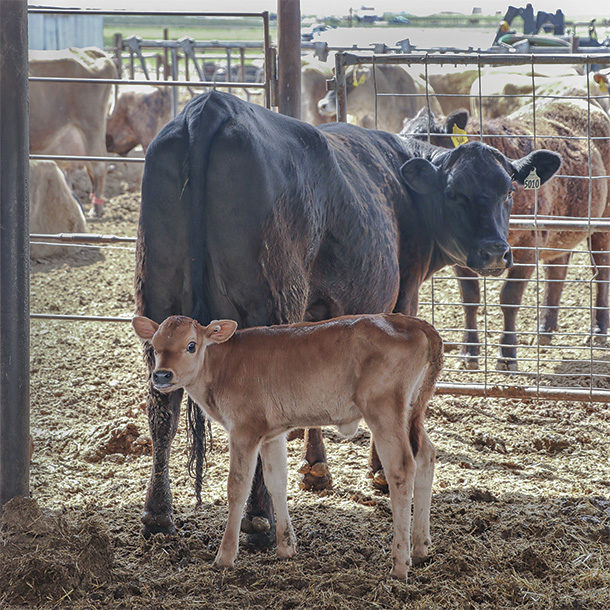 Prenatal trace mineral supplementation: Setting up your cows and calves for success

Amanda Gehman
Trace mineral supplementation is a critical part of a successful feeding program for all life stages of dairy cattle, especially for the dry and transition cow. The rapid transition into lactation at calving places significant challenges on metabolism to support lactation, immune function and maintenance.
Amanda Gehman

While trace minerals (copper, cobalt, manganese, selenium and zinc) have low inclusion in the ration of a dairy cow, they have critical functions in the animal, including bone development, energy and protein metabolism, antioxidative protection, reproduction, immune function, nerve signaling and muscle contraction. Trace minerals are found in forages and other ingredients, but availabilities are variable; therefore, all or part of a trace mineral required by the animal are commonly provided as a supplement in the ration.

The National Academies of Science, Engineering and Medicine (NASEM) Nutrient Requirements for Dairy Cattle were published in 2021 and included updated trace mineral requirements for lactating and dry dairy cattle (Table 1).

Prenatal trace mineral source has been found to affect performance and immune function in dairy and beef cattle. Several studies have found improved milk production when lactating cows are fed organic proteinate trace mineral compared to inorganic, averaging 5 to 7 pounds of milk per day. This impact on performance may be due to several factors: improved bioavailability of mineral (as discussed above), reduced antagonism with other minerals and compounds in the feed, improved underlying immune function. Inorganic minerals can be antimicrobial. For example, the same copper sulfate used in footbaths can also be fed to cattle. This antimicrobial effect is important because the rumen is full of bacteria and protozoa critical to digestion in the cow. Studies have shown that inorganic minerals depress rumen fermentation, leading to reduced feed digestion and energy availability to the cow. Organic proteinates do not affect rumen function. Studies have also shown that organic trace minerals lead to improved immune function. Cows experience reduced somatic cell count (SCC) and incidence of mastitis as well as faster recovery from clinical mastitis. Feedlot studies have shown reduced mortalities overall, specifically from respiratory issues, when steers were fed organic minerals.

Studies in dairy and beef cattle have examined the impact of trace mineral source fed to the gestating cow on early life health and growth and performance of offspring. Researchers found that heifers from cows that received organic minerals during the dry period were healthier during the preweaning period (zero to eight weeks) as indicated by improved overall health score and reduced biomarkers for disease. In beef cattle, calves born to cows consuming organic trace minerals had higher total immunoglobulins at 1 day old, indicating better health during early life.

Calf health as well as growth during the first eight weeks of life have been shown to indicate milk production through the first lactation. Calves that experience no or limited days sick produce more milk in the first lactation than calves that were sick. Heifers from cows that received organic minerals during the dry period attained puberty faster and calved about one month earlier than heifers from cows receiving inorganic trace minerals during the dry period. Similar results were found in beef cattle where offspring from organic mineral-fed cows attained puberty and were confirmed pregnant earlier than offspring from inorganic mineral-fed cows. The impact of trace mineral source on fertility and reproduction may be attributed to improved bioavailability and intestinal absorption of organic trace minerals compared to inorganic. These data indicate that trace mineral source during late gestation of the cow can impact early life health and fertility of the mature offspring.

Trace mineral supplementation is often overlooked as an integral part of ensuring a cow’s future production as well as her offspring’s success. Update old formulations to reflect new recommendations for trace minerals and select bioavailable trace mineral sources that meet the cow’s requirements.