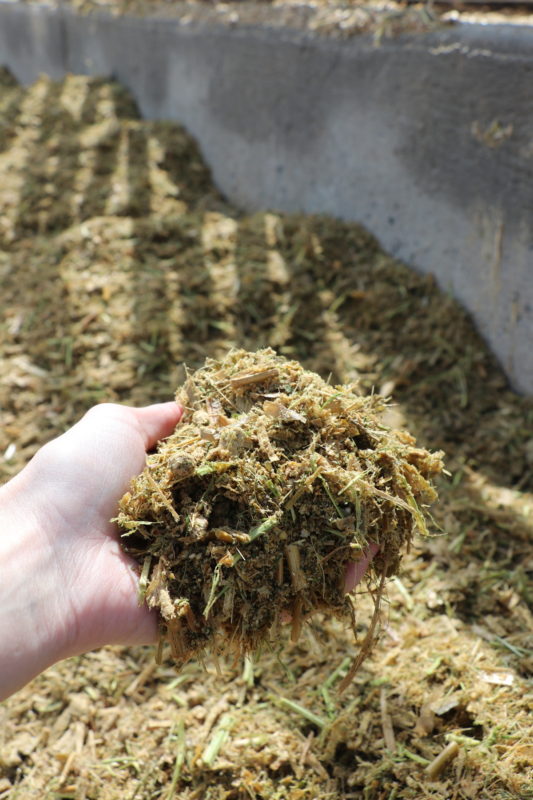 How to incorporate vitamin D into a prepartum diet

Kristen Glosson
Vitamin D is routinely supplemented to dairy cows to support a variety of physiological functions, such as mineral homeostasis and immune activity. Once absorbed, vitamin D is converted to 25-hydroxyvitamin D [25(OH) D] (calcidiol) in the liver and enters the circulating pool.
Kristen Glosson

The vitamin D status of a dairy cow is based on serum concentrations of 25(OH) D and can range from 40 to 100 nanograms per milliliter. This inactive form is converted to the biologically active form, 1,25-dihydroxyvitamin D [1,25(OH)2D] by the kidneys and is tightly controlled. The active form works with parathyroid hormone (PTH) in the PTH pathway that regulates the cow’s circulating calcium (Ca) concentrations.

Forages can be a source of vitamin D, in the form of vitamin D2 (ergocalciferol). This form is highly variable in common forage types, with levels highest at the time of harvest in leafy forages and degradation occurring over time in stored forages. Since vitamin D3 (cholecalciferol) is more metabolically efficient than vitamin D2, it is the primary form found in blood circulation. Vitamin D3 occurs naturally as a chemical reaction in the skin when a form of cholesterol reacts to ultraviolet light (sunlight). However, this is an unreliable and insufficient source of vitamin D3 unless the cow is exposed to consistent sunlight. Commercially, vitamin D3, either created synthetically or extracted from sheep cholesterol, is the main form of supplemented vitamin D sources.

Researchers in 2016 also reported that across the 12 surveyed herds supplementing 30,000 to 50,000 IU per day of vitamin D3, fresh cows had lower serum 25(OH) D (less than 60 nanograms per milliliter) compared to late-lactation cows (greater than 70 nanograms per milliliter). The increased conversion of 25(OH) D to 1,25(OH)2 D to be used in immune system functions and within the PTH pathway for calcium mobilization in fresh cows is likely the cause of decreased circulating concentrations. Combined with lower intakes, the increase in metabolic demand for 25(OH) D may be a limiting factor in transition cow health.

Researchers in 2020 used samples collected from five commercial dairy herds to test the association of serum 25(OH) D during the transition period with metabolic disorders. They found that lower serum 25(OH) D concentrations (less than 71 nanograms per milliliter) at two to 10 days post-calving were associated with uterine disease. This has led to investigations of additional supplementation of vitamin D3 and/or supplementation of the 25(OH) D form around the time of calving to better support this increased need.

Supplementing 25(OH) D is an alternative to vitamin D3 supplementation and may be seen as a more effective method to increase the circulating concentrations of 25(OH) D. The 25(OH) D bypasses conversion from vitamin D3 by the liver and can directly enter the circulating pool. This intermediate metabolite remains in circulation longer than vitamin D3, extending the efficacy (half-life) from one to three days to up to two weeks. Another advantage in supplementing the inactive form, 25(OH) D, instead of the active form, 1,25(OH)2 D, is that the 25(OH) D does not become the target of enzymes designed to maintain 1,25(OH)2 D within a tight margin.

Researchers in 2012 used a 2x2 factorial design study to investigate the effects of DCAD (+14.4 milliequivalent (mEq) per 100 grams of dry matter (DM) or -16.8 mEq per 100 grams of DM, using commodity anionic salts prepartum and 25(OH) D supplementation (zero or 3 milligrams per day oral dose) using 60 transition dairy cows. Plasma calcium concentrations were significantly increased in cows fed the combination of 3 milligrams of 25(OH) D with a negative DCAD prepartum diet. This is thought to be related to the effects of compensated metabolic acidosis and kidney PTH receptors. Compensated metabolic acidosis is a direct result of feeding a negative DCAD prepartum diet and increases the responsiveness of the kidney to PTH. The kidneys control the activation of circulating 25(OH) D to the active 1,25(OH)2 D. The 2012 research explained that the direct impact of a negative DCAD diet on the kidneys was essential for the success of supplementing 25(OH)D in prepartum cows.

Researchers in 2018 used a 2x2 factorial arrangement of treatments to determine the direct effects and interactions of DCAD and vitamin D3 source (n = 79). Cows were fed a positive DCAD (+13.0 mEq per 100 grams of DM) or a negative DCAD (-13.0 mEq per 100 grams of DM; using a commercial anion supplement) supplemented with either 3 milligrams (120,000 IU vitamin D) of vitamin D3 or 25(OH) D. Cows fed a negative DCAD prepartum diet had improved ionized and total calcium concentrations directly after calving regardless of additional supplementation. Supplementing the prepartum diet with 3 milligrams of 25(OH) D improved prepartum ionized and total calcium.

Combining the prepartum and postpartum results from the different papers in 2018, a prepartum program supplementing 3 milligrams of 25(OH) D3 with a negative DCAD diet improved calcium status and promoted greater milk production and improved health in transition cows.

Vitamin D is important in many physiological functions of a dairy cow, and circulating 25(OH) D concentrations are a way to measure the vitamin D status of the animal. At the time of calving, serum 25(OH) D decreases and may become a limiting factor in calcium recovery mechanisms and health of postpartum cows. Supplementing 25(OH) D to transition cows in combination with a prepartum acidogenic program may help improve the cow’s vitamin D and further improve calcium status, which leads to better performance.