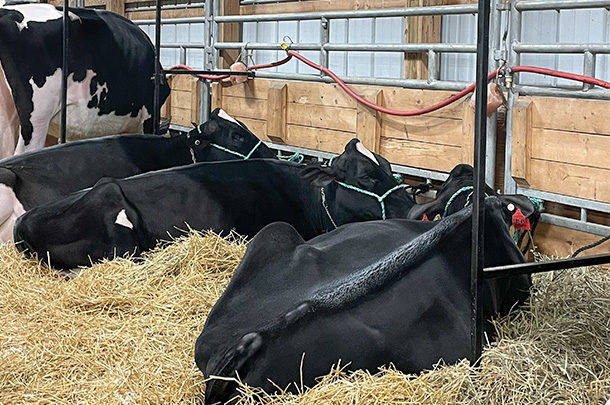 Katie Coyne
There are three things that can bring you to the winner’s backdrop at a show. First, select an animal with good type. Second, work hard at home – listen to what you need to learn, don’t cut corners, and be prepared. Finally, once you are at the show, obtaining a good fill on your animal is as important as a good clip job. Here are five steps to a great fill and a blue ribbon.
Katie Coyne

As in all things with showing dairy cattle, the work starts at home. Seven to 10 days before the show, tie heifers up and feed them individually. Do they need a little more feed or a little less? Feed hay throughout the day so the animals are full. Make sure they have access to water at least twice a day. If your animal needs more depth, hand watering twice a day will “stretch” their rib structure. Be sure to introduce beet pulp at home so they are familiar with eating its unique taste and texture. This is especially true of Brown Swiss, who tend to take a little longer to adjust to new feed products. Be cautious to not feed too much beet pulp at home; it is a sugar byproduct, and sugar adds unnecessary calories.

Once you get to the show, feed hay all day. Some people feed in small amounts – this practice cuts down on wasted hay and keeps things fresh in front of the animals – which makes eating more desirable. Some people prefer to feed hay in larger amounts at once; either way is fine, just make sure animals have access to all the fresh hay they can get.

Side note: You’ll notice successful show strings have people who stand all day with the animals and feed hay. If you’re going to a show, it’s important to be attentive to your animal’s needs: Don’t give up placings because you sat in the chair all day or slept in the camper.

Adjust as needed at the show

Here is a fact: In the few days your animals are at the show, their usual routine is different, so their feed routine may need to be adjusted accordingly. When at the show, cut the grain in half. Cattle will gain weight very quickly standing on the pack, so if you are there more than a day or two, feed half of the grain or pellet you feed at home. Many show herds will feed a small amount of the animals’ usual feed once a day and that’s it. It may be a good idea to mix a handful of dry beet pulp into the feed the day before the show.

There are many fields of thought on how to water at a show. Some people install a water line with drinking cups or buckets, especially for milk cows. Some people have large tubs placed between two animals and make sure they are filled throughout the day. Back in the 1900s, we monitored water intake very carefully by watering with a hose and bucket in the stall. This is still the very best way to monitor intake. Calves receive one bucket in the morning and one at night. Mid-size heifers should receive one-and-a-half to two, and larger heifers can have two-plus buckets twice a day. If you allow them to drink as much as they want at one time, they may not drink at all the next time, and that becomes a problem, so a strict protocol works best when watering by hand. Never lead animals out to a tub to drink – there is a potential to spread sickness and disease. Also, an animal drinks best when it is in a familiar spot such as their stall at a show. If they are looking around or scared when they are led out to drink, they won’t get the water intake they need. Third, there is no way to regulate how much they are drinking. If their kidneys become taxed from too little or too much water at one time, they will urinate blood and not feel well. Take the time and effort to make sure they have access to water in their stall where they are tied.

1. Four hours before the show begins, mix a bag of beet pulp with a 5-gallon bucket of hot water. Warm water brings out the molasses smell in the pulp. Mix thoroughly. The beet pulp only has to be damp; there should be no standing water in the tub or cart you mix it in.

2. Feed a scoop of beet pulp to each animal. You can feed it in a feed tub, but this one feeding we often feed right on the pile of hay. (You usually will use feed tubs to keep the feed area fresh throughout the show). Keep feeding a scoop at a time to animals as they begin to get low on the beet pulp in front of them – don’t let them run out. Depending on how many animals you have, you may need to mix another half to whole bag. Up to four animals can easily eat an entire bag for filling, so plan accordingly. If you only have one or two animals, only mix half a bag at a time.

3. When the animals start to slow down, add a sprinkle of grain either to your mixture in the cart or add a handful on top of their feed they are eating. This is also an excellent time to give them one bucket of water.

4. When they completely stop eating, it’s a good time to get tops and belly hair done, as the shape of their belly should have changed with the filling process and you can carve the belly hair to reflect that change.

5. Let them rest! The entire process above should take about two-and-a-half hours per head. Since you began four hours before the show starts, they should have plenty of time to lie down, chew their cud, pick through feed and rest. Do not take them for a walk. (There are exceptions to this, such as a walk will get the blood flow going and a cow will make more milk, or an animal with a stomachache will benefit from a walk.) Do not lie on them – you wouldn’t like it if you were full after a big meal, wanted to rest and someone was lying on you, so don’t do that to your animal either. Leave them alone so when it’s time to show, they aren’t tired. Remember, they are already completely out of their routine for the day, so keep the stress low.

6. Ten minutes before the class, get them up, get their show halter on, and get them out for final preparation. Use your shine, brush them off, brush and fluff the tail, paint their feet if they are black-footed and use fly spray. When you are done, put them back in the stall and offer them more water. If they are a little weak over the top, you may want to add ice to the water, as this will give them a slight chill and keep their top up. Watch carefully how much they are drinking so they don’t overdo it. If they drank a bucket earlier in the morning, they should only drink what they need at this point and top off a perfect fill.

Cows should also begin being filled four hours before the cow show will begin. For a noon start, filling around 8 a.m. will work well.

For cows, if you have only been at the show for a day or two and have access to fresh TMR, we recommend filling with beet pulp until they stop. Then switch to the fresh feed.

1. Not enough water. For an animal to feel comfortable and hydrated, they need to have some water absorbed into their system at least every 12 hours. If you are regulating water, a bucket offered early on show morning will make a big difference later in the day.

2. Watering too much too early. Monitor that water intake early so you have “room” to add water later and to pop that top up with cool water right before they head to the ring.

3. Not filling with hay ahead of time. You cannot get adequate depth of rib in one day – it is at least a weeklong process you should begin at home. Feed different kinds of hay from one day to the next. We will often trade hay at the show just to give our animals something different.

4. Feeding alfalfa or fresh green hay. These types of hay will not add depth; they will just give your animal loose manure. Check around the neighborhood for last year’s hay – long-cut grass hay is a great filler.

Remember, successfully showing cattle takes time and effort – invest your time in your show string the day ahead of the show, and it will pay big when the class is placed.