With strong milk futures prices, dairy producers are facing increased pressure from lenders and others to protect milk prices or income margins far out into the future. Protecting profits is important, as long as it is done with sound reasoning and understanding of all options, according to Travis Glaser, certified crop insurance agent and owner of ARM Services LLC.

Glaser, who partners with FarmFirst Dairy Cooperative on dairy risk management strategies, warns that some of the pressure applied to producers to lock in long-term price or margin protection will come at a cost of high premiums or margin calls, negatively impacting the producer’s risk strategy.

Glaser described several options available to dairy producers to protect milk revenue. He warns producers to analyze costs with each of the strategies listed.

At any one time, sales are open for as many as five future quarters. Sales close 15 days before the beginning of the quarter. For example, the period to purchase Dairy-RP coverage for the third quarter of 2022 closes on June 15. The market changes daily, and Dairy-RP endorsements must be purchased between the CME market closing and the next CME opening.

Dairy-RP coverage cannot be purchased on days when major USDA dairy reports that could impact markets are released, including Milk Production, Cold Storage and Dairy Product reports (see Calendar). Dairy-RP is also not available on days when applicable futures contracts move limit-up or limit-down, or on days when Chicago Mercantile Exchange trading is closed due to holidays. 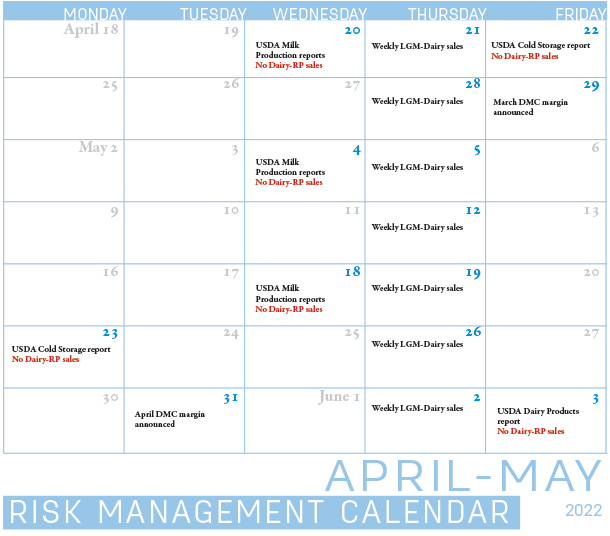 Click here or on the calendar above to view it at full size in a new window.

Indemnity payments are determined by calculating the difference between expected revenue and actual revenue according to market prices, adjusted on a state or regional basis to account for differences between expected and actual milk production. Premiums do not become due until the month following the end of the quarter.

Sales periods for the LGM-Dairy program are open on a weekly basis. Unlike Dairy-RP, LGM-Dairy is available even if a sales period falls on the day of a USDA report.

Under current market conditions, Glaser prefers LGM-Dairy because the producer is eligible to protect margins on a monthly basis, avoiding the quarterly averaging under Dairy-RP. In some states, premium costs for LGM-Dairy are cheaper than Dairy-RP.

However, offsetting the gain in the average milk price were higher average costs for alfalfa hay, corn and soybean meal. February feedstuff prices yielded an average DMC total feed cost of $13.72 per cwt of milk sold, up $1.09 from January and the highest since the inception of the DMC program or its predecessor, the Margin Protection Program for Dairy (MPP-Dairy), dating back to March 2014.

That left the February DMC margin at $10.98 per cwt, 56 cents less than January‘s margin, which hit a 14-month high of $11.54 per cwt. Despite the decline, the margin remained above the top DMC Tier I insurable level of $9.50 per cwt.

A lot of milk price comparisons are being made with those prices received in 2014. The two years provides a substantial contrast in milk income margins, however.

February 2022 milk production was down 1% from the same month a year earlier, but an eight-month decline in cow numbers came to a halt, bolstered by higher milk prices. U.S cow numbers were up 3,000 from the revised January 2022 estimates but still down 96,000 head from a year earlier and were 137,000 head lower than the peak in May 2021.

The USDA’s March preliminary milk production estimate will be released on April 20. Check back with Progressive Dairy for numbers and analysis.

Compared to the previous month, the USDA raised the milk production forecast by 300 million pounds to 226.3 billion pounds. If realized, 2022 production would be unchanged from 2021.