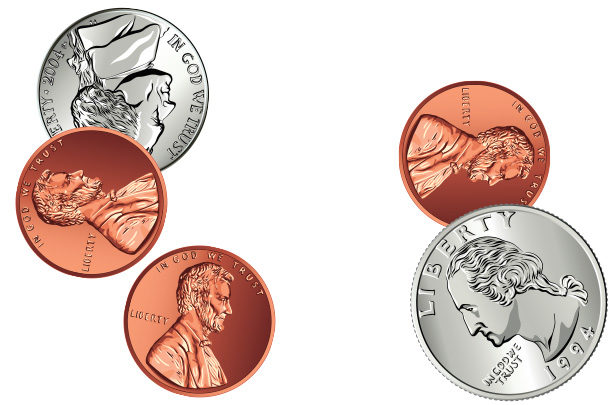 33 cents: The elephant of feed costs

Paul Dyk
A dime, a nickel, maybe even a penny. Dairy producers and nutritionists go back and forth on cutting feed costs by fractions while optimizing milk production.
Paul Dyk

Thirty-three cents. The elephant in the room. Every morning before the feeder lays down new feed, he collects the leftover feed from the day before. Many dairies target 3% to 5%. At 5%, with a cost of $6.50 per head, this is 33 cents per head per day. How should we look at this cost? Waste? Where should this feed go? Is it free or should it be discounted?

Words matter. So let’s get our terminology right first.

Refusals are feed left over that is mostly inedible for high-producing cows. It doesn’t look like the original high-cow TMR. It might contain longer particles like straw, pieces of cob or it is heating.

Weighbacks are feed left over that is like the TMR from the day before. Cows are eating this like the original TMR. Maybe it’s not perfectly the same, but it is within 10% of the original ration specs.

Do your feeders understand the difference?

For high-producing cows, I would argue the goal is zero percent refusals and 3% to 5% weighbacks. If the leftovers in the morning are essentially refusals, we need to turn the clock back and ask why it doesn’t look like the original TMR. If we are left with a lot of long particles and cows are sorting, then how do we change particle size or TMR consistency to prevent this sorting? If we have refusals with cobs or another ingredient cows are leaving behind, do we need to look at processing of corn silage? If we have a TMR that is a bit slimy or heating because of summer heat, do we have a fresh forage issue (facing/storage) or do we need to add an acid for the summer?

What do we do with these weighbacks?

2. Feed weighbacks to heifers on the farm. This was more popular 15 years ago when most dairies had breeding-age heifers on the farm. From a nutritional standpoint, heifers from 5 to 12 months do well on weighbacks. Maybe too well in some cases, but that’s not the main problem. Let’s take a heifer eating 15 pounds of dry matter a day. With a targeted heifer diet, we can likely hit 8 cents per pound of dry matter (or less). The lactating TMR at 12 cents per pound of dry matter leaves a difference of 4 cents, or 60 cents per head per day on these heifers – or maybe 30 cents per head per day if it’s half their diet. It’s a simple solution on many dairies, but it is not cheap.

3. Feed the weighbacks to feedlot cattle (Holstein/beef cross steers). This has become more common in the last few years; there is a pen of “steers” that receive 100% of the weighbacks. For the steers in the early growth phase, the economics are like the heifers: a lactating dairy TMR that is overpriced for these animals. For steers in the finishing phase, the TMR is not balanced correctly to finish these animals quickly or economically as a typical finishing feedlot diet. If you want to discount the weighbacks 10% in value, OK. But they’re not free.

4. Re-feed the weighbacks to lactating cows. This can work well if your weighbacks look very similar to the original TMR. An inclusion of 3% to 5% on high groups could be a starting point where 10% to 15% might be possible on your pregnant groups. Keeping this percentage lower on the high group should protect you from unexpected changes in the weighbacks. If they turn into refusals because of summer heat, change your strategy. If implemented correctly, this is likely the best way to recapture those 33 cents.

What about other groups on the farm?

The weighbacks from the fresh group can likely be re-fed to high groups – but don’t re-feed weighbacks to this group; there just isn’t any room for error on this group. For the close-up group, weighbacks could potentially go to the dry group. This can be a tricky group often fed large amounts of forage; having weighbacks that are like the original TMR is challenging.

Why not just feed to a slick bunk and eliminate all weighbacks?

For the best herds, they’ve realized that weighbacks are an opportunity and have pushed weighbacks below 5%. How low can you go? In the beef world, slick bunks are managed tightly with success. But we are not feeding beef cattle at 20-pound intakes; rather dairy cattle with 60- to 70-pound intakes. For many dairies, when they have pushed the boundaries of lower weighbacks, they end up with 1% to 2% “refusals,” often three to four hours before the first feeding of the day. That is a recipe for lower milk production. Slick bunks for dairies are an ongoing discussion; we’ve not reached the end of that discussion.

Pennies, nickels and dimes are important; just don’t forget about the elephant.