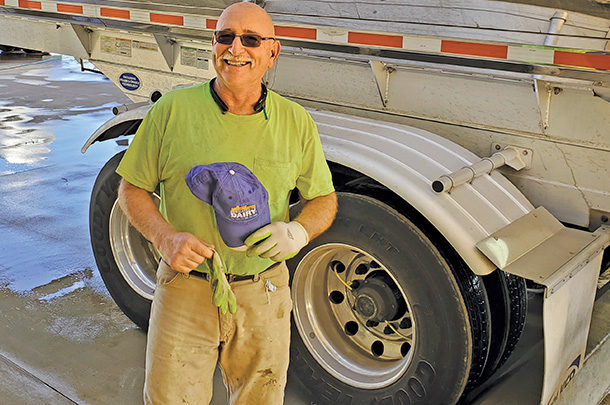 Emily Barge
Working with family can be challenging. Building relationships with non-family partners can often feel even more daunting. How do you know you have similar goals and vested interests?
Emily Barge

How can you structure the business so everyone gets their fair share? How can you work together and communicate effectively?

Growing up in the Bronx, New York, Gelber didn’t get experience on a dairy farm until sixth grade, when his family spent the summer in upstate New York. He attributes much of his success to his parents, from whom he learned the value of a positive attitude, work ethic, business skills and street hustle – all skills he said he applies to his dairy operation today.

After graduating from Cornell University in 1982, Gelber started working for Ron St. John in Batavia, New York. When St. John created a new Alliance Dairy in 1990, in Florida, Gelber joined him as herdsman before being promoted to several other positions. Beginning in 1997, he annually received 1% stock in the business and, in 2007, was made a 10% partner in the newly acquired Barrington and Highbrighton dairies in Georgia. In 2013, he bought his partners’ shares. Today, he’s in partnership with his son, Richard, and a new financial partner as of January 2020.

The Barrington and Highbrighton dairies include 13,500 mature cows, 12,500 heifers and 6,000 acres. The location features a long growing season and unlimited irrigation. Situated in Macon County, within hours of large population centers in Atlanta, Georgia; and Orlando, Florida, it provides strong markets for fluid milk. While those components help the dairies thrive, Gelber credits strong partnerships for business success.

Several priorities go into building a mutually beneficial partnership, Gelber said. Whether the partnership involves family or non-family members, topping the list is making sure the business is financially viable in terms of profitability and cash flow.

“If you have too much debt, you’ll have problems with high payments, and you’re vulnerable to low-price years,” he said. “If you have to rely on paying down debt to increase your cash flow, you’re going to be in trouble because when you’re done paying that down, you’ll have to replace something else.”

Profitability is also important for farms that have family members who might want to be involved in keeping the legacy alive. “If you have a profitable dairy, there’s going to be room for family,” Gelber said.

There should be no conflicting business interests, and all partners involved should have the same morals. “If you have reservations or ill feelings about someone, I don’t care how good or talented they are; it won’t work out,” Gelber said. “When it came to how to treat people and our business approach, [St. John and I] were very similar.”

In addition to making sure work habits and outlooks on life align, Gelber stressed the importance of having all partners be true leaders on the dairy operation. Sitting in the office, without ever going out on the front lines, doesn’t always build respect or trust with employees.

“If you’re figuring out the pregnancy rate or how much feed is getting wasted when there’s a cow lying in an alleyway, the milkers are behind by an hour, or the feed wagon has a flat tire, you’re not leading the charge and your people aren’t going to be lining up behind you,” he said.

When opening the dairy operation to new potential partners, it’s important to assess the dairy business correctly. Cows, land, debt, barns, lagoons, permits, markets, inventories and milk checks should be part of the valuation. The ability to be profitable today and in the future should be considered.

“You could have the nicest barns and nicest facilities, but if they can’t generate any money, it’s not worth very much,” Gelber said. “If you can’t pay for it in 10 years, you probably have it at the wrong value.”

When it comes to cattle, Gelber focuses on three key components. “We pay a lot of attention to genetics, but when you’re valuating cows, there are three things that are important. The price of feed today, the stage of lactation and how old they are. Genetics is probably a distant fourth,” he said.

For forage valuation, Gelber and his team complete monthly inventories to weigh all feed going in and out, with a goal of having an accurate number at all times. With forages being taxed at full strength, Gelber says knowing those numbers can help if you’re at the stage where you are buying out your partners and considering the taxes involved in the purchase.

When buying out partners, Gelber also explained why it’s important to diminish the effects of taxes and debt.

“Reasonably inflate cattle and things that have good or neutral tax consequences and deflate things that are taxed at full strength such as land rent and forages,” he explained. “But keep value in reason, and don’t push it to the limit or commit fraud.”

According to Gelber, this can help when figuring out what is fair and equitable. “You have to have a lot of trust and be true to your partners,” he added.

When working with both family and non-family partners, there are often generational differences that can make managing a business difficult. If you can find a way to fulfill the goals of both generations, all partners can benefit, Gelber explained.

“Economic goals can complement each other between generations,” he said. “It’s easy to think that the two generations are always against each other, but the way I look at it, the older generation is looking for wealth preservation and has an interest in their balance sheet. They want rental income for retirement.

“The younger generation wants to own the engine for profit, and profit and loss are more in their field,” Gelber continued. “If you can make sure both parties are getting their goals realized, everyone is going to be happy. There’s tremendous opportunity for young people who are good.”

Organizing a new business structure around leadership and ownership is also important to the long-term success of the partnerships.

“Don’t make a quasi-governmental mess that the next generation can’t run efficiently. When you set up a new structure, you need to have one or two people responsible and in charge,” he explained.

Ultimately, Gelber said he is always thinking ahead to what’s in the best interest for him and his partners. He believes it is his responsibility to be fair and equitable.

“Nobody escapes old age, but business can. We have some trusts in place; we’re taking care of taxes and preserving wealth,” he said. “With new land, we put in an LLC [limited liability company], so depending on who has ownership at the time, they get their fair share. I’m not going to cut my young partners out on something that’s worth money at the end of the day.”