Various pivot irrigation technologies, such as low-elevation sprinklers and mobile drip irrigation, have promising water-saving potential, but the investments required for these technologies can sometimes be too great to incentivize producers to adopt. Several well-known and less expensive strategies exist. These strategies include regular maintenance of irrigation systems, reducing irrigation rates and advanced irrigation scheduling. Although these strategies seem simple and straightforward, several irrigation professionals indicate that there are many opportunities to advance these approaches. Furthermore, many of these strategies have not been tested with experimental rigor.

Therefore, the objective of our study was to identify which inexpensive water management strategies may maintain yield with less water. An experiment was conducted at 12 commercial alfalfa fields in south-central Utah in 2019-21. Alfalfa was cut and harvested two to four times each year. Existing sprinkler equipment (regulators, nozzles, sprinkler bodies) on these pivots ranged from 3 to over 20 years old. Three equipment (existing, new, new with 10% rate reduction) treatments were implemented on one span (fourth to sixth tower) of the pivot at each site. Four irrigation scheduling treatments (grower schedule, irrigation scheduler application, soil moisture-based and a commercial model) were also implemented on 16 adjacent sectors (each about 50 feet wide).

Multiple technologies and strategies for advanced irrigation exist, but investments and skill required for these strategies vary widely. One common approach to advanced irrigation is new pivot irrigation technologies such as low-elevation spray application (LESA), low-energy precision application (LEPA) nozzle systems and mobile drip irrigation (MDI). These technologies show promise and have documented increases in alfalfa yield through improved irrigation uniformity, coupled with frequent water savings. These investments [(additional approximate $15, $75, $140 per acre for LESA, LEPA and MDI, respectively, beyond a mid-elevation spray application (MESA)] in new pivot technologies can sometimes be too large for some alfalfa growers to adopt these practices. Several other less expensive strategies to improve irrigation management exist. Some of these include: 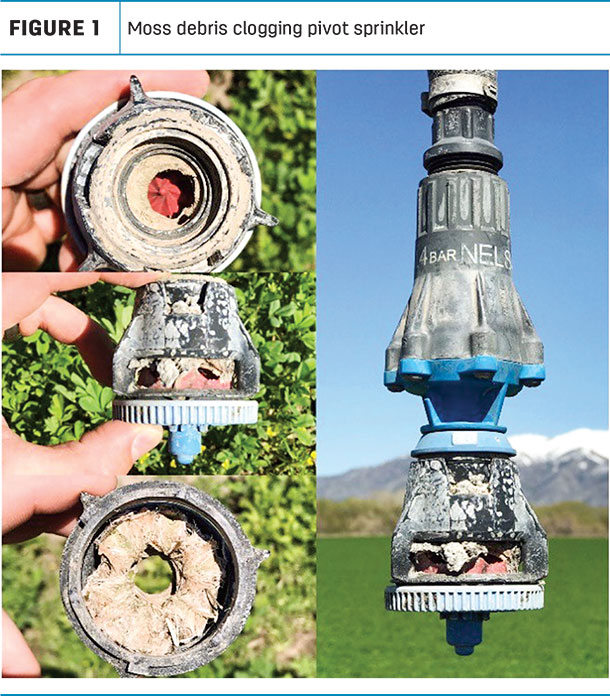 Prioritizing which methods of irrigation and irrigation equipment management might improve alfalfa yield and quality will help growers improve their profits and deal with diminishing water supplies that are prevalent across the West.

How to schedule irrigation

Modifying irrigation schedules can be one of the simplest and most inexpensive ways to improve water management. The first step to selecting a schedule is water measurement and monitoring. The importance of this cannot be overstated. Inaccurate water measurements will thwart almost all other efforts to refine irrigation management. This can be as easy as measuring water volume in buckets placed under moving sprinklers. The more accurate and continuous measurements can be obtained with flow meters.

Irrigation schedules for sprinklers can usually be easily modified by changing flow rates, irrigation set lengths, nozzle size and other methods. The premise of selecting the right schedule is to apply rates/frequencies that do not exceed soil intake rates, do not exceed the maximum allowable soil water depletion between irrigations and meet crop water use or evapotranspiration demand. This approach will reduce or prevent runoff and unnecessary water losses. Several methods exist for selecting irrigation schedules. Some of the major types include:

In 2019, a study was established on 12 alfalfa fields in south-central Utah to test several irrigation strategies that might stretch limited water supplies. On each pivot, a single span (normally the fourth to sixth span from the center point) was split into three sections of each size. On two-thirds of the span, new sprinkler equipment (nozzles, regulators, sprinkler) of the same brand and type were installed (Figure 2). One of these thirds had slightly smaller nozzles that were designed to apply 10% less water than the other two-thirds. This allowed us to test how new sprinklers and a 10% reduction in water rates might influence alfalfa yield and water use. In each of the thirds, four alfalfa yield samples were collected each cutting by harvesting 10 feet of the windrow (15.5 feet wide) for each sample. The study was repeated in 2020 at 10 of the same fields as 2019.

On the same pivots, four irrigation schedules were tested. Irrigation rate but not timing was the difference between irrigation schedules. We intended to adjust both rate and timing, but this was not possible when working in production fields. The four schedules were the grower’s conventional irrigation rate and timing, a rate based on soil moisture sensors installed at 1-, 2- and 3-foot depths at a single location in each field, rate determined by the irrigation scheduler application with weather data collected on-site and rate recommended by Lindsay FieldNet Advisor. Each of the four irrigation schedules were replicated four times utilizing four large sectors in 2019 or 16 smaller sectors with four replications of each schedule in 2020 and 2021. Pivot control panel updates were required on many pivots to make automated control and FieldNet Advisor operational. These updates were problematic on several pivots and resulted in only nine, six and six fields with schedule treatments in 2019, 2020 and 2021, respectively.

In 2019, when the study began, the age of the sprinkler packages on the 12 pivots ranged from 3 to 20 years. The average wear on the nozzles was assessed by measuring the inner diameter of the nozzles with a caliper and comparing it to the design diameter. Nozzle wear ranged from zero to 2% across the sites. Regulator wear was assessed by measuring pressure on the outlet site with 40 psi on the inlet side. Regulator wear ranged from 1% to 50% across the sites.

Replacement of sprinkler equipment impacted alfalfa yield in only three of 37 (8%) cuts in 2019 and two of 19 (11%) in 2020. These yield improvements did not always happen on fields with the oldest sprinklers. They also did not consistently occur on the same farm across cuttings, but rather random cuts at various farms had yield improvements with new sprinklers. This indicates sprinkler parts may last longer than anticipated.

The 10% reductions in irrigation rates rarely impacted alfalfa yield in 2019 and 2020. In both years, there were a couple of cuttings that had increased yield with less water. Over-irrigation was not an issue on these sites, so it’s unclear why there was a yield increase. Of more interest was whether irrigation reductions decreased yield. In 2019, only two of 37 (5%) cuts had reduced yield with less water, and reductions occurred in different fields for various cuts. The low frequency of yield reductions was likely related to the weather in 2019. The spring and early summer was much wetter than normal at nearly all the sites. The average reduction in yield at these two cuttings was 0.44 ton per acre. In 2020, only four of 19 cuts (21%) had yield reductions with 10% less irrigation. This was likely related to the extremely low precipitation in 2020. Many sites received no rainfall for several summer months. The four cuttings in 2020 had an average yield reduction of 0.37 ton per acre. This indicates frequent opportunities for slight cutbacks in irrigation rates without impacting production, especially in years with more precipitation.

Water use differed among the irrigation schedules and differed by year. The 2019 growing season was much wetter than normal in the spring and early summer. By contrast, 2020 was drier than normal, and 2021 was extremely dry with severe water shortages on many of the fields. In all three years, soil moisture sensors most often (55% of cases) recommended the lowest irrigation amounts. FieldNet Advisor recommended more irrigation than all other methods in 2020 and 2021. The irrigation scheduler recommended similar or slightly more irrigation than the soil moisture sensor approach. The conventional irrigation schedule utilized by cooperating growers was often near the amount recommended by other approaches. These results indicate that growers were often irrigating close to the recommended amounts of advanced scheduling tools, but there were still frequent opportunities to save water without reducing alfalfa yield. These water savings were especially apparent in wet years like 2019 when irrigation reductions had few impacts on alfalfa production.

This study suggests many growers could cut irrigation rates by 10% without adversely impacting alfalfa yield, and worn sprinkler equipment may not be causing as much yield loss and non-uniformity issues as expected. Advanced irrigation scheduling approaches may have more potential to reduce irrigation rates than improve alfalfa yield and should be considered where water optimization is desired or required.

Portions of this article originally appeared in the 2021 Western Alfalfa and Forage Symposium proceedings.